Are you looking for the best rainbow quotes to accompany a photo or simply to inspire you? I’ve collected the ultimate list for quotes about rainbows that would be perfect for Instagram captions!

As the saying goes, “after every storm comes a rainbow”, and who doesn’t love witnessing a beautiful rainbow? There’s few natural events that are as spectacular! I’ve seen many incredible rainbows along my travels, and I bet you have too!

Rainbows are a true inspiration for many – from celebrities to writers to songwriters and filmmakers.  And thankfully we have the quotes to prove it!

These are the best rainbow quotes to accompany that epic photograph or to simply leave you feeling all warm and fuzzy, as well as leave you inspired and ready to tackle your storm! 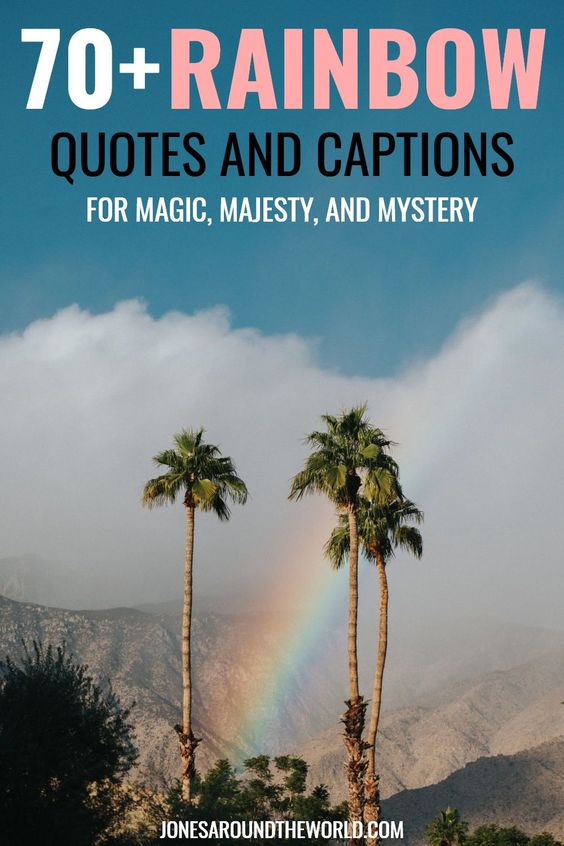 They may be brief, but these short rainbow quotes are some of the most beautiful, touching and well-crafted.

1) “And when it rains on your parade, look up rather than down. Without the rain, there would be no rainbow.”― Gilbert K. Chesterton 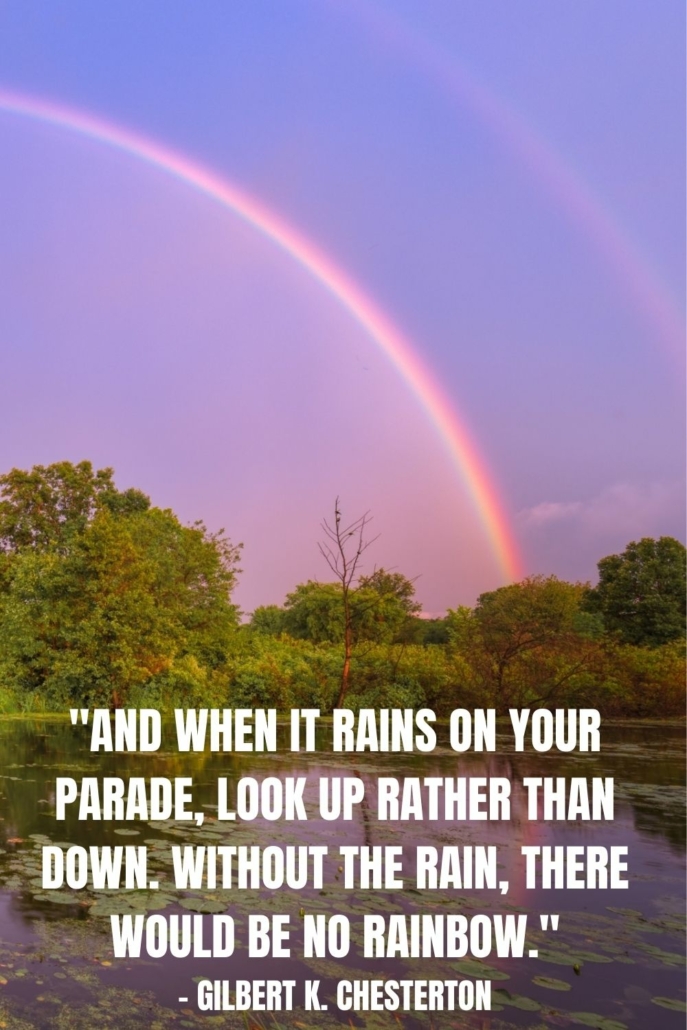 2) “Love was a feeling completely bound up with color, like thousands of rainbows superimposed one on top of the other.”– Paulo Coelho 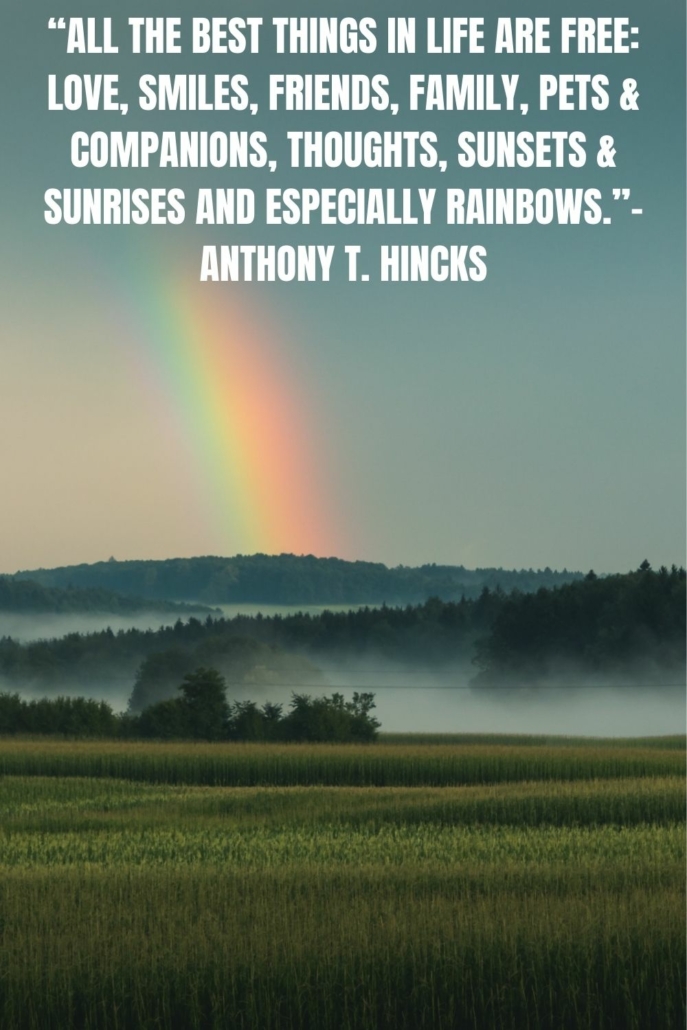 4) “I kind of view everybody like a rainbow. Everybody on the planet has all the colors of the rainbow inside.” ― Alexia Fast 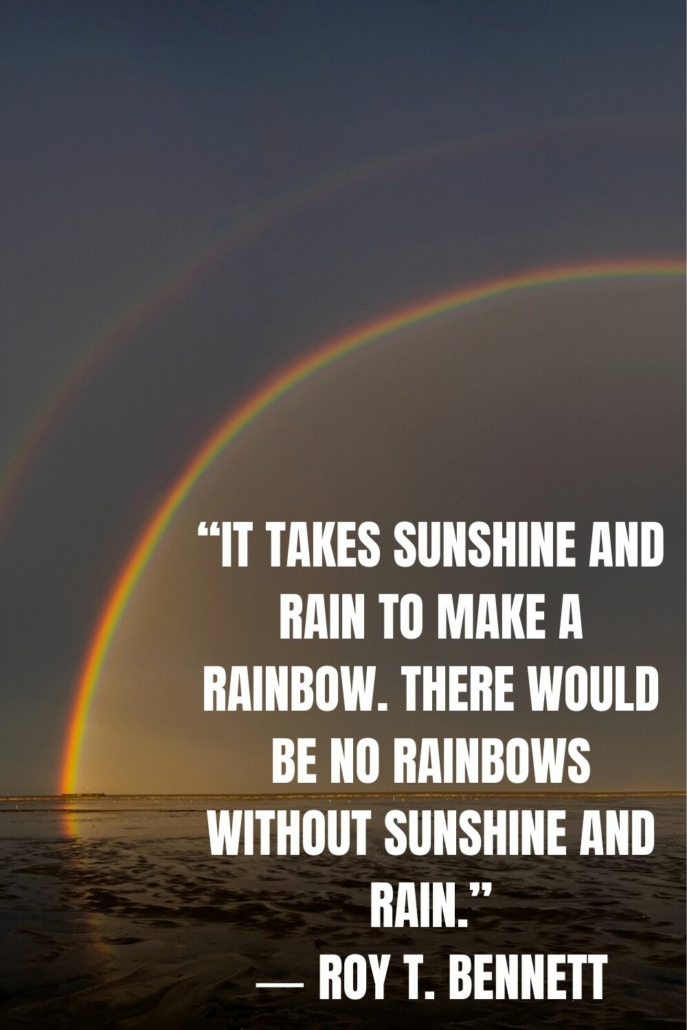 One of the most inspirational quotes about rainbows!

6) “A rainbow is a promise of sunshine after rain. Of calm after storms. Of joy after sadness. Of peace after pain. Of love after loss.” – Unknown

7) “No two people see the rainbow the same way…”― Anonymous

9) “Dare to love yourself as if you were a rainbow with gold at both ends.” ― Aberjhani 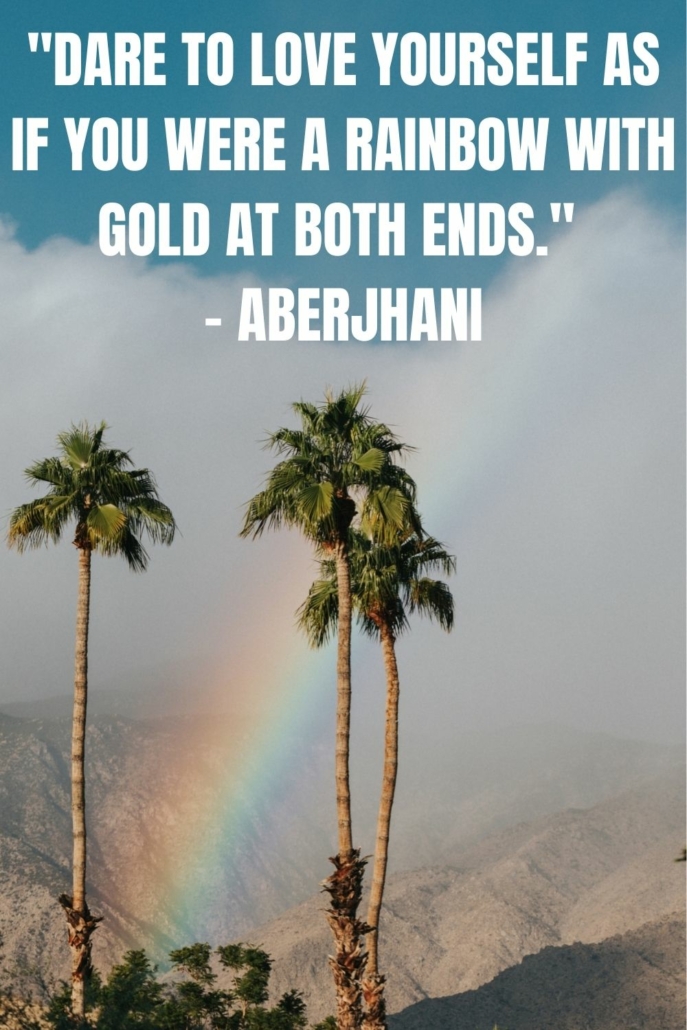 12) “One can enjoy a rainbow without necessarily forgetting the forces that made it.” – Mark Twain

14) “Don’t miss all the beautiful colors of the rainbow looking for that pot of gold.”― Anonymous 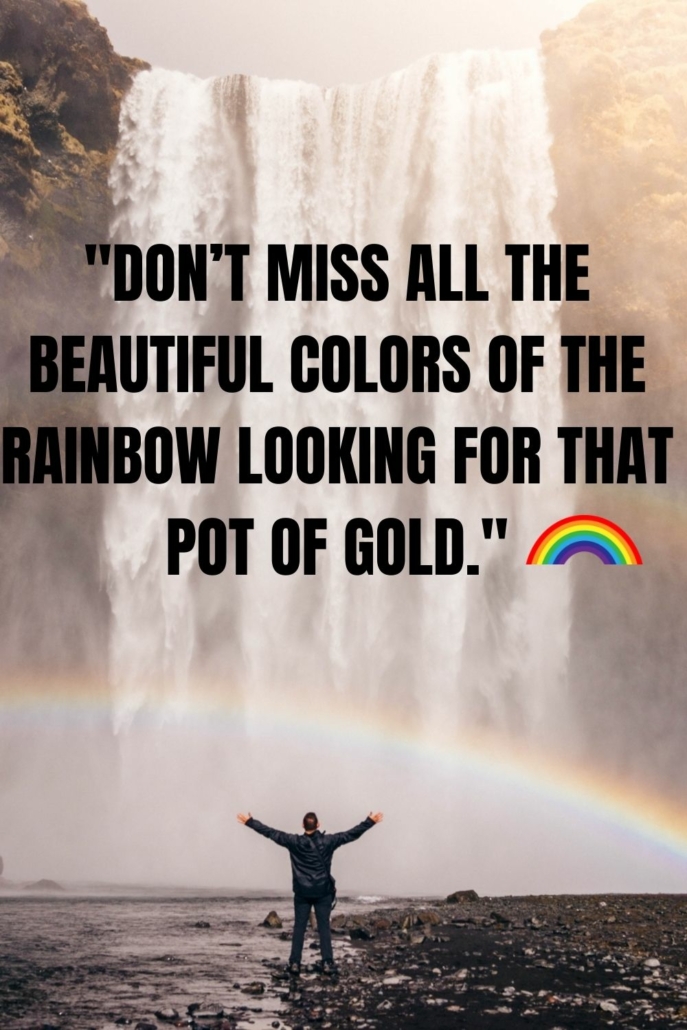 15) “If life is so blue, select another color from rainbow.”― Anonymous

16) “I’d rather see the world as a rainbow than endless shade of gray.”― Amani Abbas

17) “Where does the rainbow end, in your soul or on the horizon?”― Pablo Neruda

18) “Stay strong, there’s a rainbow after every storm.”― Anonymous

19) “My heart leaps up when I behold a rainbow in the sky.”― Anonymous

20) “Sunset is still my favorite color, and rainbow is second.”― Mattie Stepanek 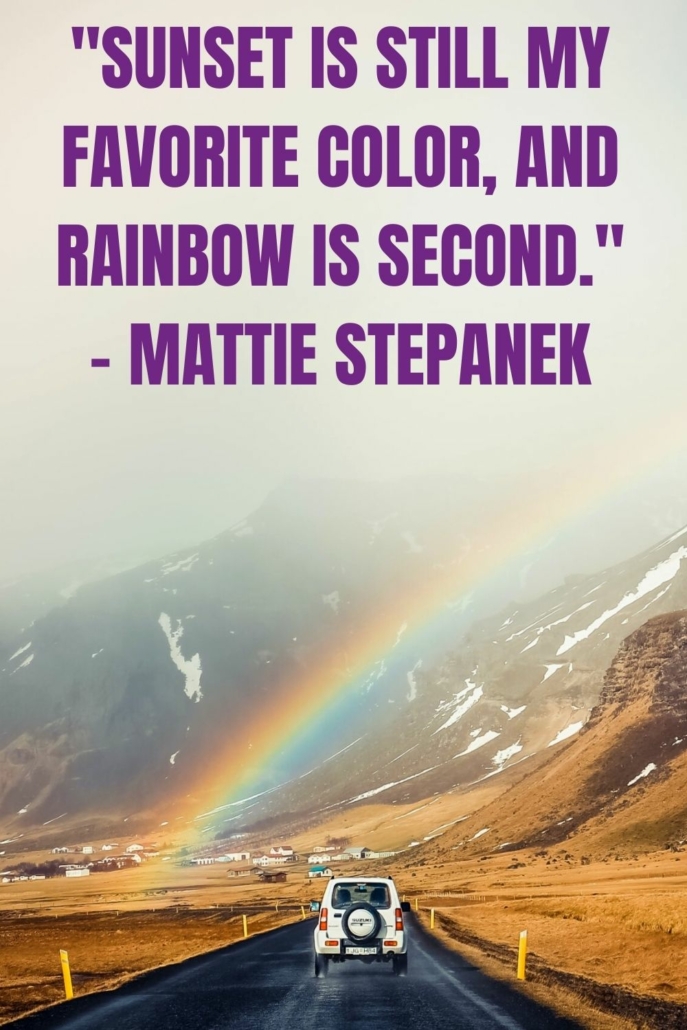 The Best Quotes about Rainbows

Everyone loves a rainbow, and these writers and wordsmiths have managed to craft some of the best rainbow quotes of all time.

21) “Don’t turn around. Don’t look back. Keep moving forward. Keep pushing. The pot of gold is at the end of the rainbow, not the beginning.”― Ziad K. Abdelnour 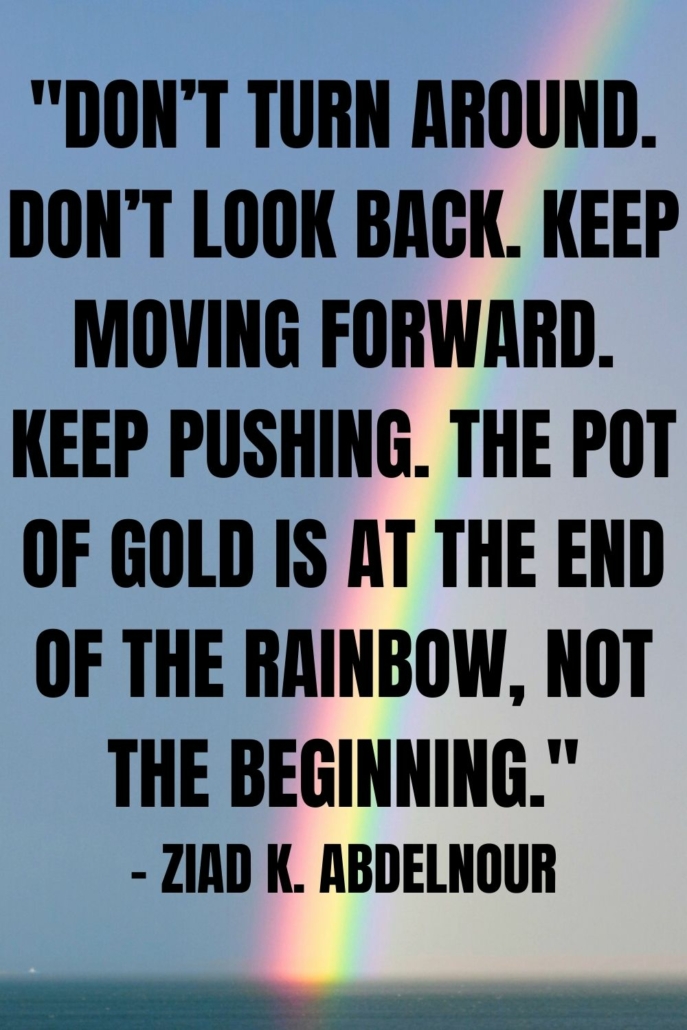 22) “He stared at her the way folks stare at a rainbow, taking in all that unexpected beauty, not wanting to look away in case it might disappear.” ― Shannon Wiersbitzky

24) “We are all part of the same rainbow. We are all reflections of each other. As unique and diverse as we are in character and skills, the source of all creation is as multidimensional as we are.”― Suzy Kassem 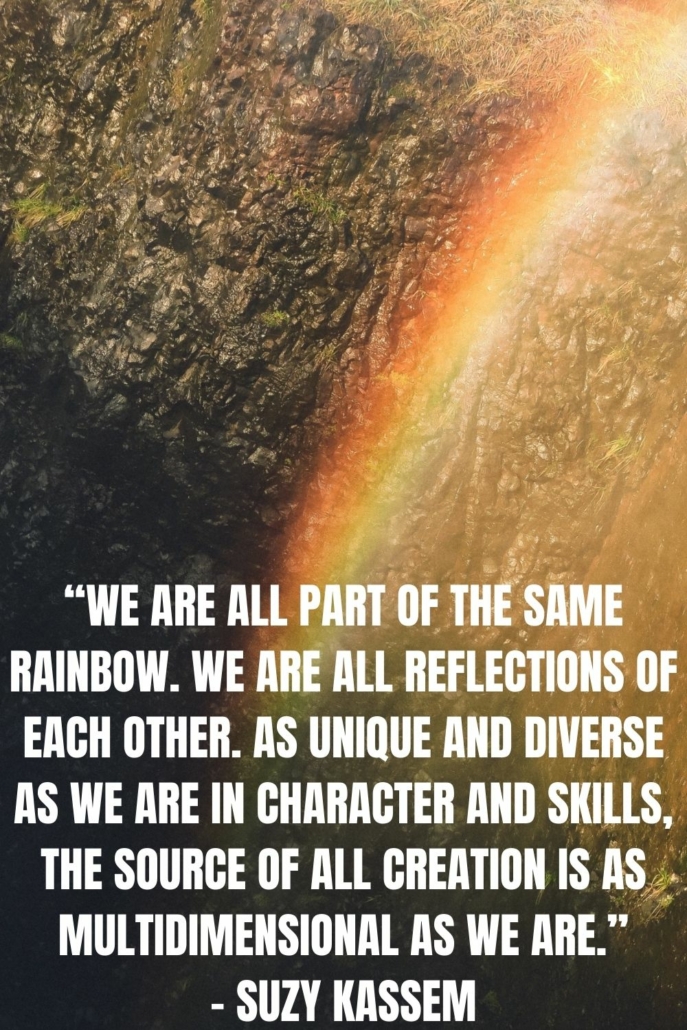 25) “Shine your soul with the same egoless humility as the rainbow and no matter where you go in this world or the next, love will find you, attend you, and bless you.” – Aberjhani

26) “I’m continually inspired by nature, and the rainbow is one of nature’s greatest optical phenomenon. The sighting of a rainbow never fails to bring a smile to people’s faces. They signify optimism and positivity: with them comes the sunshine after the rain.”– Matthew Williamson

27) “When you look at the world, the world isn’t just one palette. It’s a beautiful rainbow, and why not have someone to represent that rainbow?” ― Joan Smalls

28) “When beauty is seen through the windows of the soul – rainbows appear and everything is magical. It feels simply divine.” – Angie Karan

29) “When it rains look for rainbows, when it’s dark look for stars.” – Oscar Wilde 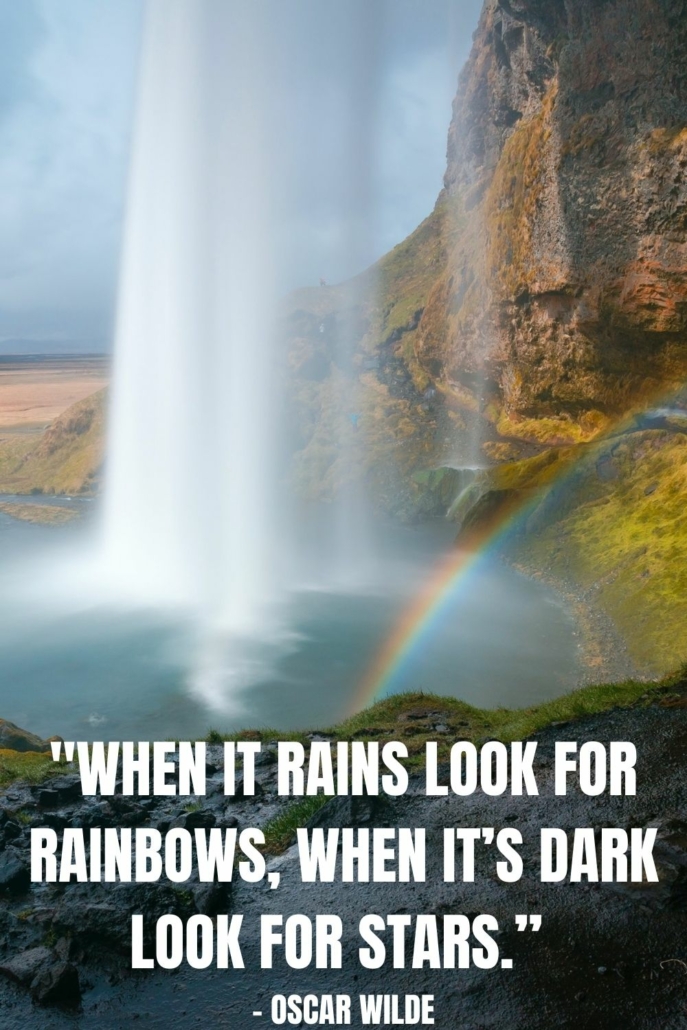 32) “Life without dreams is like a rainbow without colours.”– Greyson Chance

33) “Look at the world through rainbow colored glasses.” 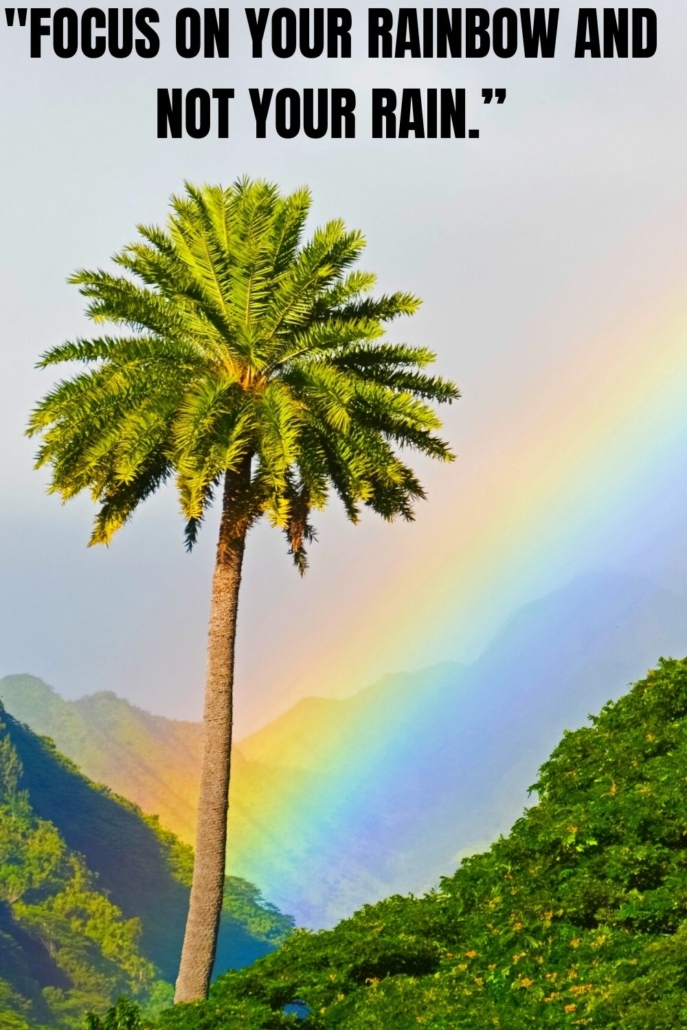 35) “Don’t miss all the beautiful colors of the rainbow looking for that pot of gold.”

37) “Friends are like rainbows. Always there to cheer you up after a storm.”

39) “The greater your storm, the brighter your rainbow.”― Anonymous 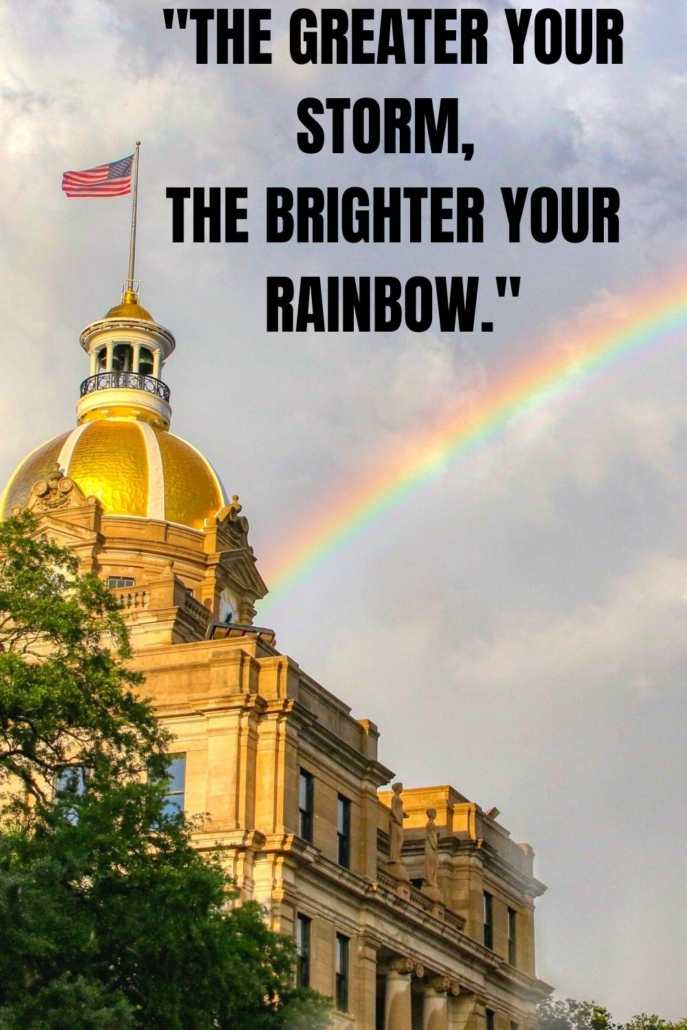 If you’re seeking inspiration at the end of a rainbow, these inspiring rainbow quotes promise to fill your cup.

40) “Don’t seek to be happy; let everyone else chase after that rainbow. Seek to be kind, and you’ll find the rainbow follows you.”― Richelle E. Goodrich 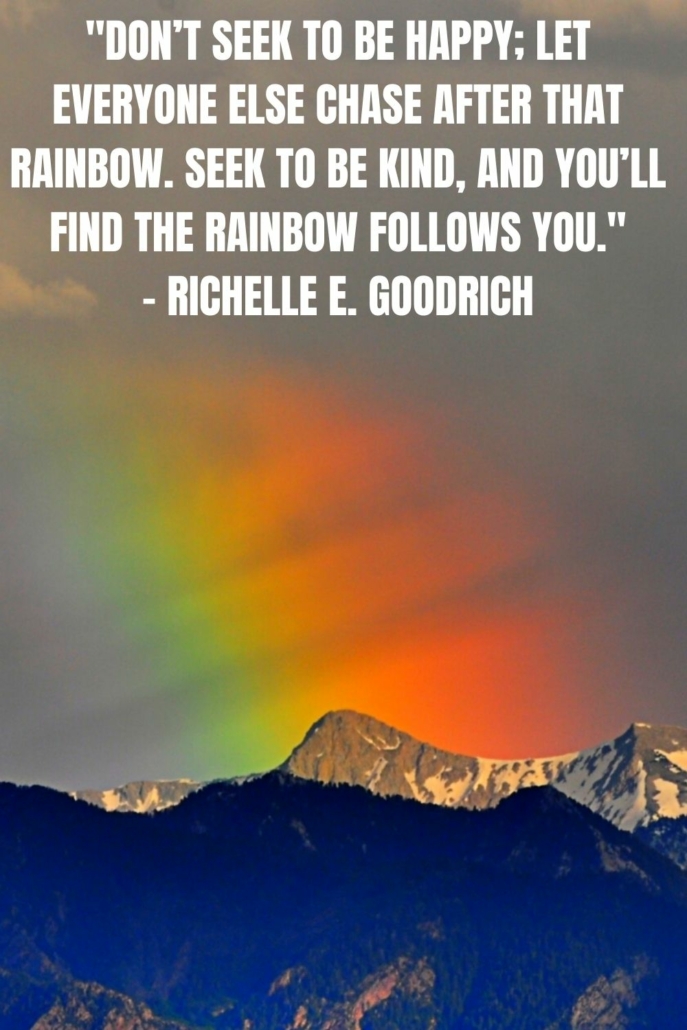 41) “Life has a lot of grey and sadness, look for the rainbow and frame it. There is beauty in everything, sometimes you just have to look a little harder to see it.” – Charlotte Kitley

42) “Be thou the rainbow in the storms of life. The evening beam that smiles the clouds away, and tints tomorrow with prophetic ray.” – Lord Byron

43) “Just look at the sky when the rainbow appears and all the richness of colors will fascinate you completely.”― Eraldo Banovac 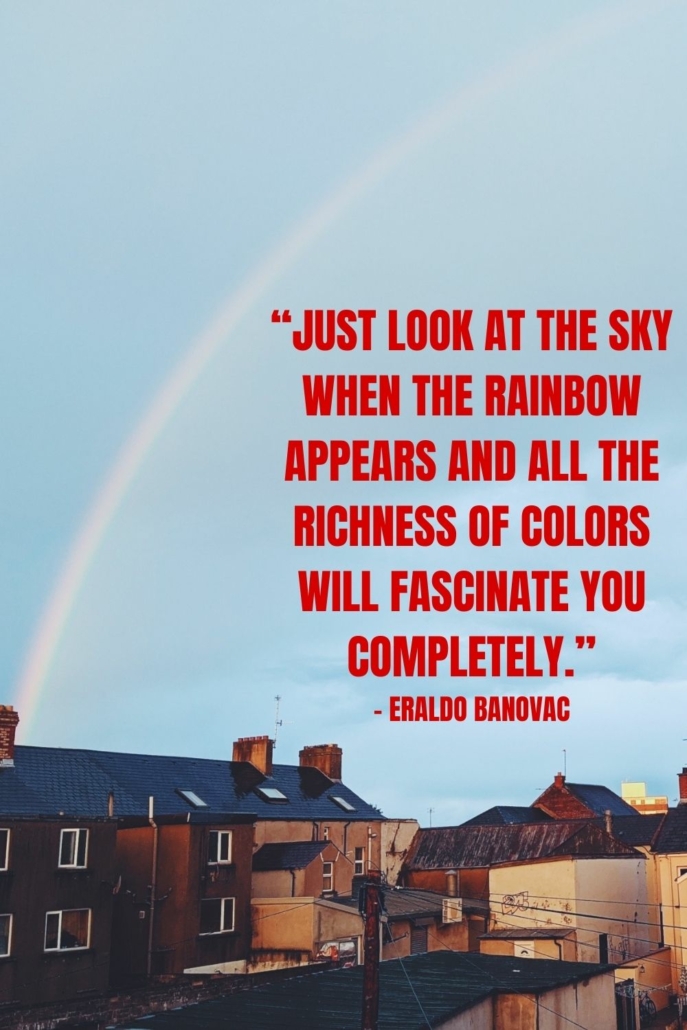 44) “If you have ever followed a rainbow to its end, it leads you to the ground on which you are standing.” – Alan Cohen

46) “Be everything that you are unapologetically, most of you will find out that you are not just one color, you are a rainbow.”– Mridula Singh

47) “If you want to enjoy the rainbow, be prepared to endure the storm.” – Warren Wendel Wiersbe 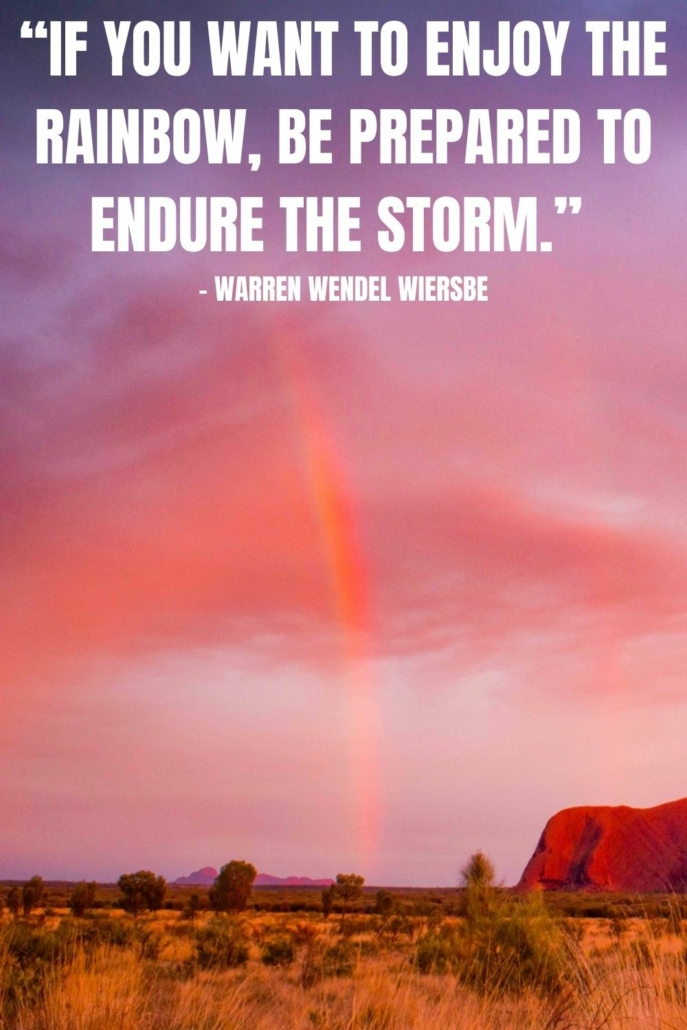 48) “Count your rainbows, not your thunderstorms”– Unknown

51) “Life throws challenges and every challenge comes with rainbows and lights to conquer it.”― Amit Ray

52) “Let your happiness be known to the world like a stunning rainbow.”– Somya Kedia 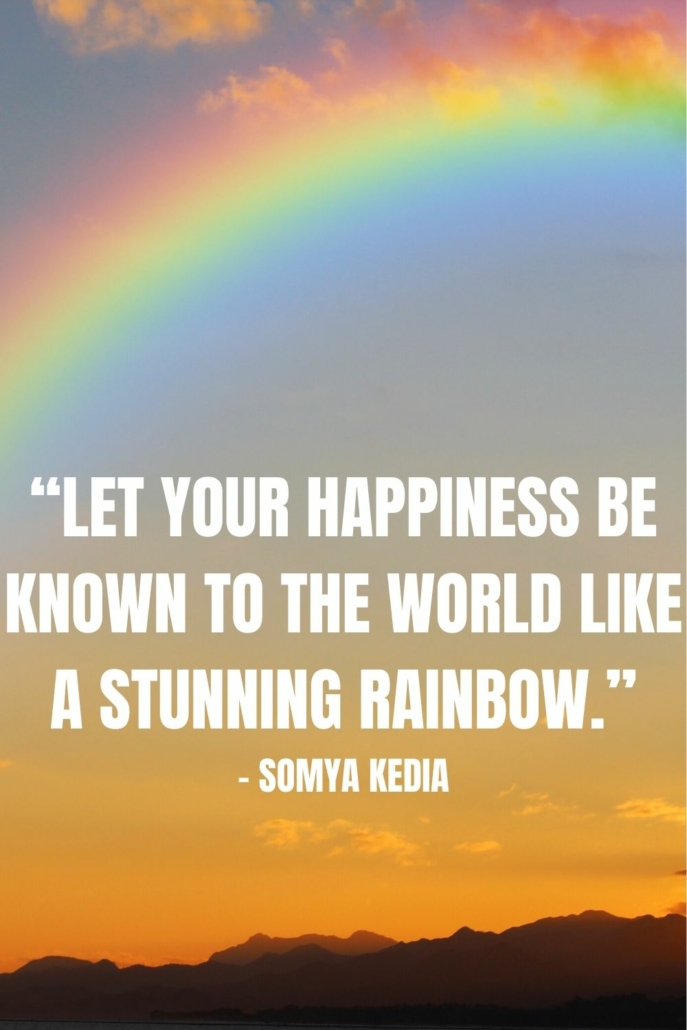 Despite their subject matter being beautiful and inspirations, these comedic minds have managed to craft some seriously funny rainbow quotes.

53) “My two favorite colors of the rainbow are gold and leprechaun.” – Jarod Kintz

54) “It’s a rare occurrence, like a double rainbow. Or like someone on the internet saying, ‘You know what? You’ve convinced me I was wrong.” – Ted Danson, Michael 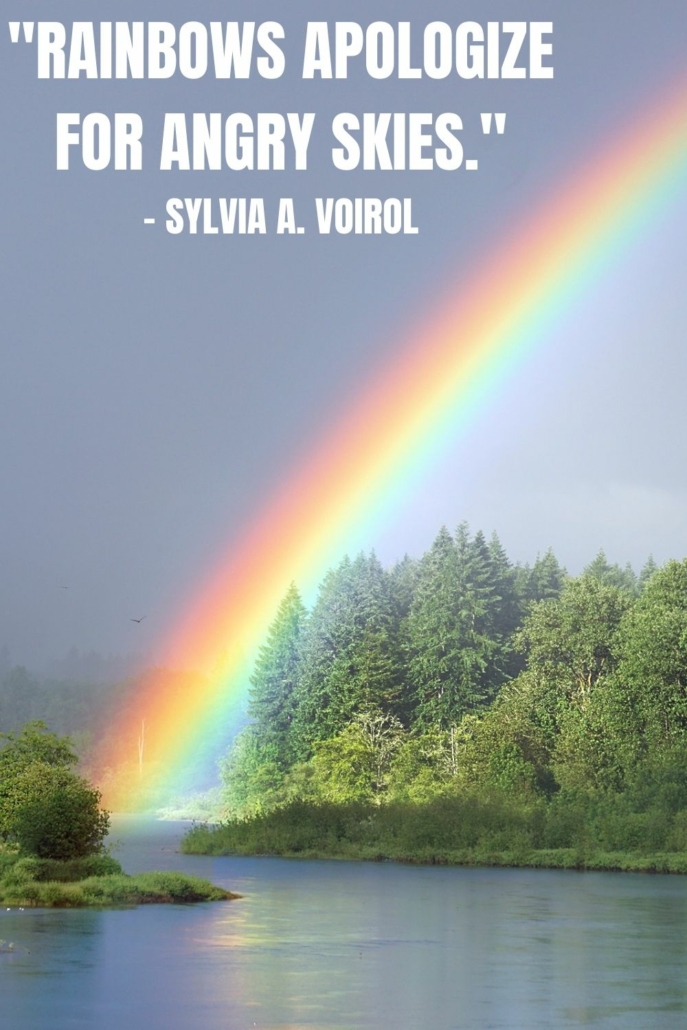 58) “Teach them that rainbows appear after a storm to remind them that light begins and ends with all colors.” – Frederic M. Perrin

59) “In life, you either choose to sing a rainbow, or you don’t. Keep singing.”― Kathleen Long

60) “Storm? Shine your light and make a rainbow!” – Richie Norton 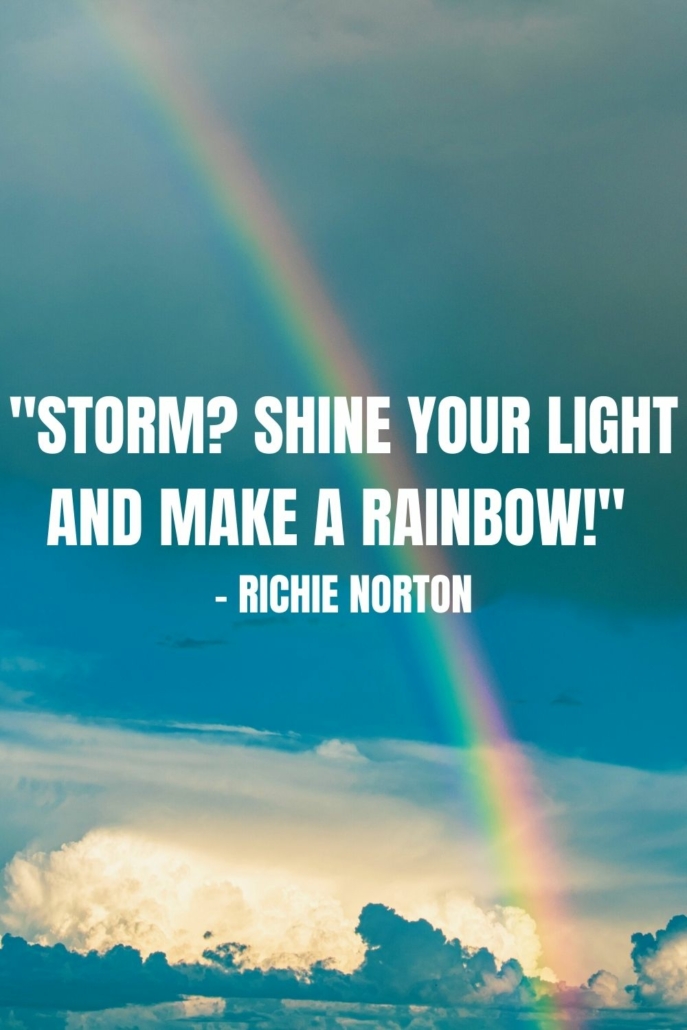 Celebrities love a beautiful rainbow like the rest of us, and have used them as their own inspiration, resulting in these celebrity rainbow quotes.

62) “God puts rainbows in the clouds so that each of us – in the dreariest and most dreaded moments – can see a possibility of hope.” — Maya Angelou 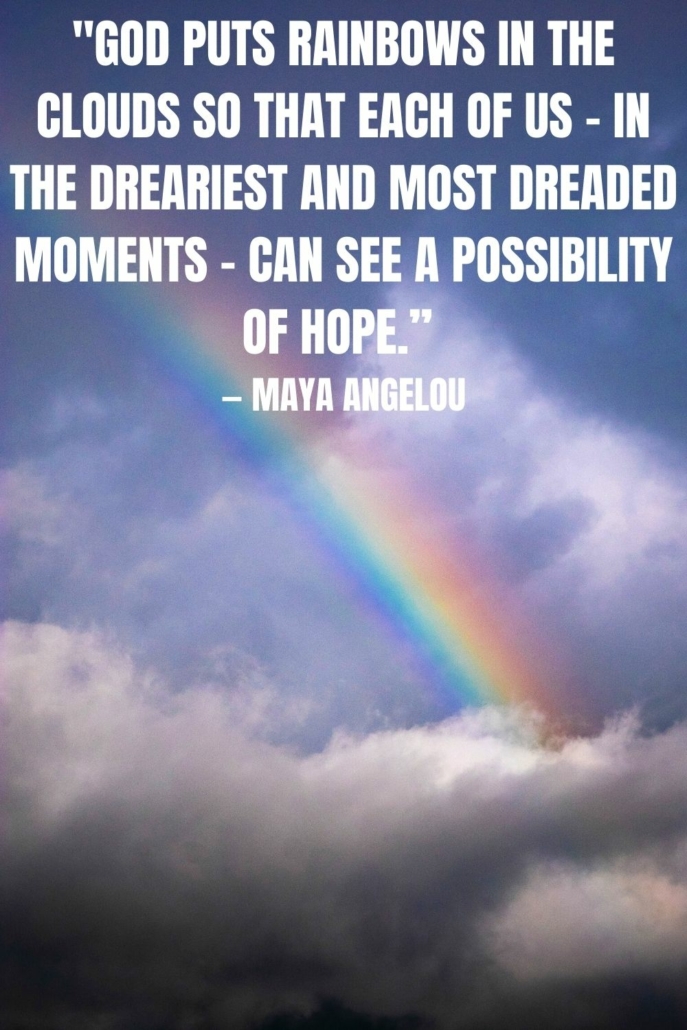 From famous lands over the rainbow to classic children’s movies with lots of magic, these are the best rainbow movie quotes from some of the greatest films every made.

63) “Willy Wonka: [handing something to Mrs. Teevee] Here, take these / Mrs. Teevee: What are they? / Willy Wonka: Rainbow drops. Suck them and you can spit in seven different colors!” – Charlie & The Chocolate Factory

65) “It takes both the sun and the rain to make a beautiful rainbow.”― Cinderella 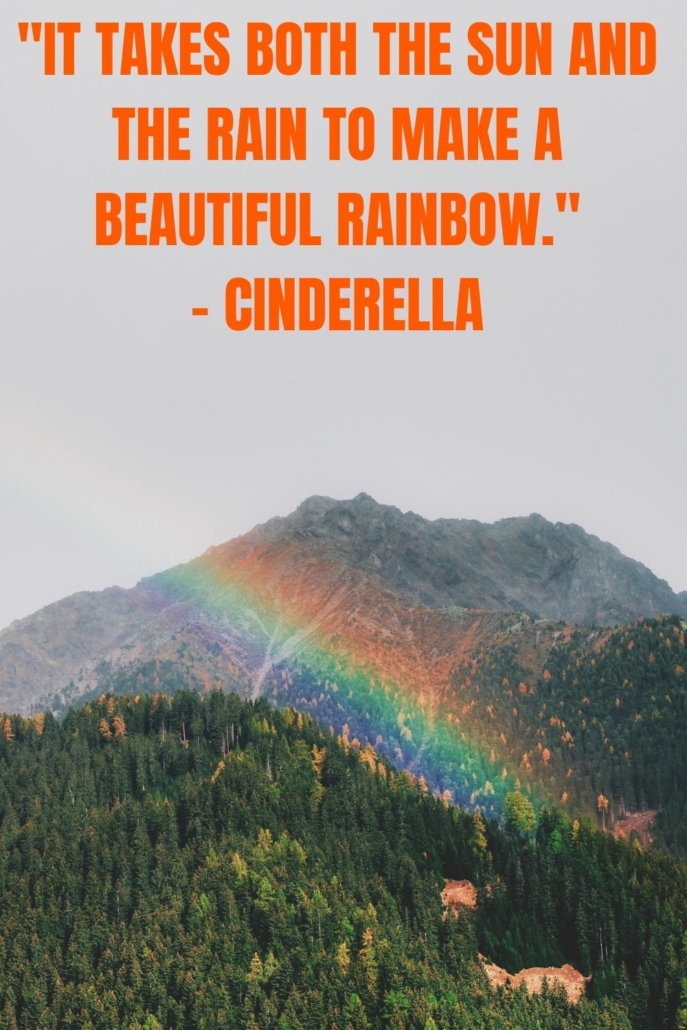 Rainbows have even used as inspiration by songwriters to craft some of the best ever songs, and these song lyrics about rainbows will sure to have you singing along too.

67) “When the morning gathers the rainbow, want you to know I’m a rainbow too.” ― Bob Marley, Sun Is Shining

68) “Wherever you go, so will I cause a double rainbow is hard to find.” – Katy Perry, Double Rainbow

70) “Your true colors are beautiful like a rainbow.” ― Cyndi Lauper, True Colors

71) “We are rainbows, me and you. Every color, every hue.” ― Miley Cyrus, Rainbowland

72) “Somewhere over the rainbow, skies are blue. And the dreams that you dare to dream really do come true.” – Judy Garland, ‘Over The Rainbow’ 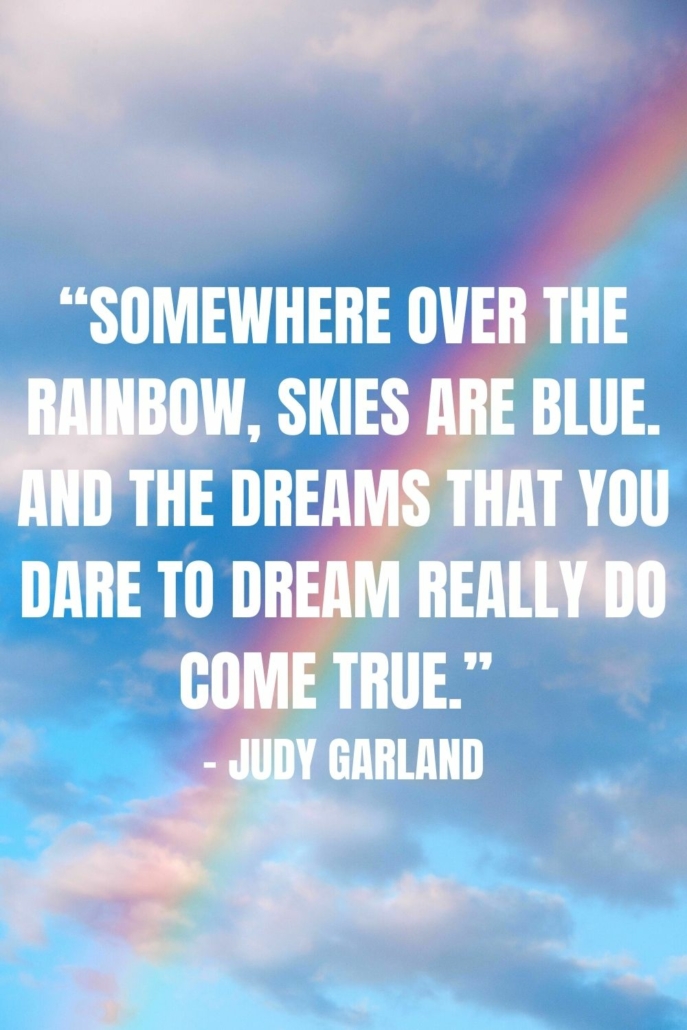 Quite possibly the most iconic rainbow quotes!

Did I miss any top rainbow quotes?

There’s probably a million quotes about rainbows out there, so I’m sure I’ve missed at least a few! Is your favorite rainbow quote not on my list? Send it through to me and I’ll tack it on! 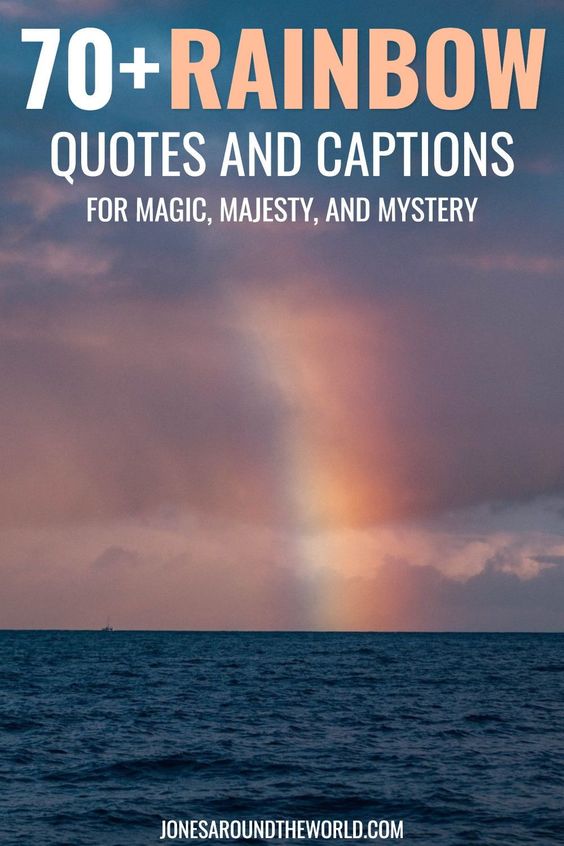 I’ve seen some spectacular rainbows on my travels, and I’m sure you have too! Is there anything better than a brilliant rainbow after a heavy shower? Where did you see your best rainbow?

Thanks for reading about the best rainbow quotes!