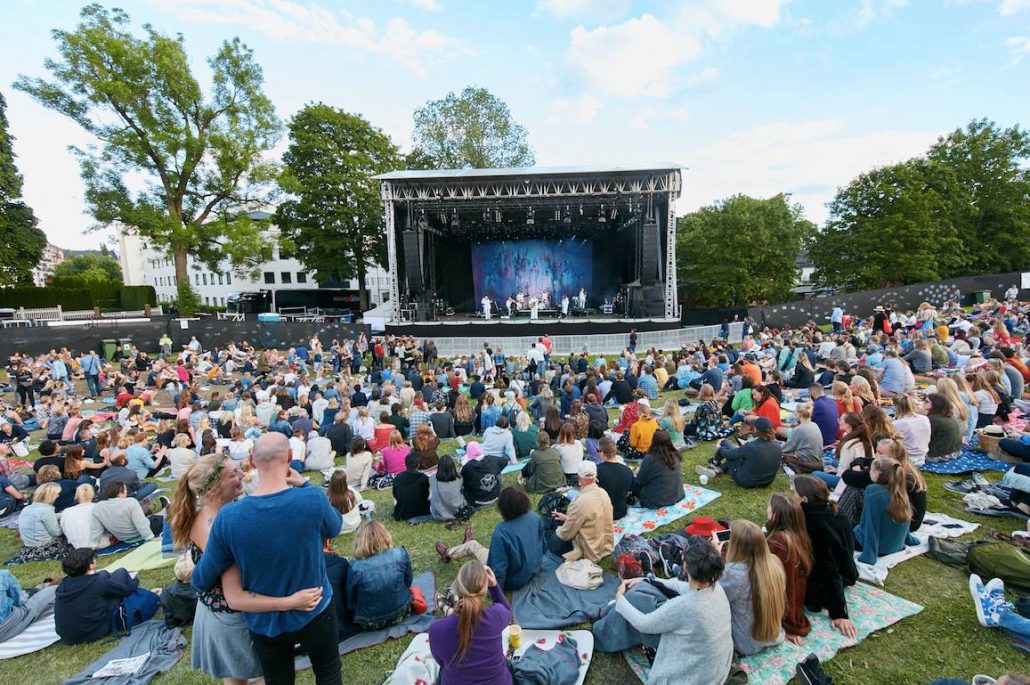 Norway is easily one of the most fascinating and beautiful destinations in the entire world!  While hundreds of thousands of people fly into Oslo every year because it’s the gateway for exploring the gorgeous country, there’s actually tons of amazing places to explore in the Oslo Region, as well as amazing music festivals to check-out!  The region’s motto is “where city and nature unite”, and it really captivates everyone who visit with outstanding scenery for adventure seekers and vibrant nightlife / live-music scene.

While Norway is widely known as being a rather expensive country to visit, it’s actually one of the cheapest countries to fly to in Europe!  If you haven’t heard of the crazy deals that Norweigan Air offers between popular U.S Cities and Oslo,then you’re in for a real treat!

For example, you can fly one-way from New York to Oslo for as little as $160 U.S.D one-way!  I’d recommend taking advantage of those cheap fares, spending 4-5 days exploring Oslo and the surrounding areas, and hitting up one of these music festivals!

This all-ages festival is one of the biggest and best in the country, and brings over 60,000 attendees to enjoy an impressive line-up covering a wide variety of genres.  With 2017 hosting international acts like The XX, Lana Del Ray, Pixies, and many more; it’s guaranteed to be a solid event for all music fans.  Located in Oslo’s gorgeous and spaceous Toyenparken, you’ll love spending 4-days exploring all the stages, food stalls, and meet travelers from around the world.

The key goal of Pikniki i Parken (Picnic in the Park) is simply to enjoy good music in a laidback atmosphere.  They encourage guests to bring some friends, bring their own food, and listen to quality tunes in one of Oslo’s most beautiful areas!  While the 2017 edition just ended, it included amazing acts like Father Jon Misty, Solange, and First Aid Kit.  Follow the Piknik i Parken Facebook Page for 2018 dates and ticket updates.

While some would call it a music festival, Oslo World is actually much more with dozens of events, seminars, and concerts throughout the city.  During the day you can take your pick of one of the many free things to do in Oslo, and each night decide which event you find most appealing!  It’s one of the best times to visit the Oslo region, as you can do tons of exploring, as well as experiencing one of the cities best live-music conferences.  Check out the 2017 Program for all the details and start planning your visit!

One of the most frustrating parts about attending a music festival can be outrageous ticket prices, but that’s something you don’t have to worry about at Mela Festival!  This completely free event is conveniently located in City Hall Square, and the 2017 line-up includes acts like Timbuktu, Zack Knight, and Mira Craig.  It’s an event that should not be missed for anyone visiting Oslo this summer!  Who would say no to a free festival!?

Finally, we have another FREE & NON-SMOKING music festival in the gorgeous Grorudparken in Oslo.  This event is a perfect example of how the city has “emerged as one of Europe’s top  destinations for live music – of almost any imaginable genre.”  While the line-up isn’t stacked with world class DJ’s or famous world-touring bands, it is absolutelya well-produced event that brings quality talent to the stage.

This 3-day festival is the ultimate camping festival in the country, and always brings an incredibly stacked line-up to it’s beautifully green area.  With 2017 hosting international acts like The Prodigy, Mac Miller, and G-Eazy (just to name a few), you can be guaranteed a weekend away of epic tunes.  It’s truly one of the best festivals in Norway, and perfect for your European summer travels!  If you’re traveling with a tent, you’ll get some good use out of it!

This two-day family friendly festival is a solid choice for anyone looking for a nice weekend retreat with some quality local music.  The atmosphere at Fjordfesten really is something special, and since Norway is known for it’s many “fjords”, it’d be a big mistake not to check out Fjordfesten!  :-)

This is celebrated as one of “Norway’s leading cultural festivals”, and would definitely be something worth adding to the bucket list.  While it may not necessarily be a music festival, there’s tons of amazing events to check-out during the nine-day event.  It all leads up to the theatrical production of “Peer Gynt”.  One highly suggested concert to attend would be the Vinstra Mountain Concert by Rondane!

Are there any opera lovers reading this?  Well, then I’ve got the perfect event for you!  The Carmina Burana 2017 will be a week-long event of some of the best opera you’ve ever heard.  I’m not personally a big fan of Opera, but I would never say to to getting dressed up and listening to music in a Norwegian Fortress!

Introduction to the OscarsborgOpera - English

Which of these festivals would you be most interested in?  I know that’s a tough question, because they all seem like a pretty great time!  Whether you’re planning a two-week trip to explore Norway, or just a quick weekend trip to Oslo, definitely keep these events in mind for the future!

This post was researched and written by me in collaboration with Visit Norway to showcase some of the best festivals in the country!  :-)

I’M GOING ON AN ADVENTURE!!
Scroll to top