Are you planning on visiting the most famous landmarks in India? It’s no secret that India has a rich historical past with numerous ancient architectural gems found all around the country.

From impressive forts and palaces to tombs and temples, India is home to some of the top landmarks in Asia. Many of these landmarks are great examples of the bravery, skillfulness, and artistry of the people who built and designed them.

India’s ancient landmarks are the pride and joy of its people and the basis for the inspiration of many up-and-coming artists and architects.

To help you narrow down which ones you should add to your travel bucket list, here are some of the most famous landmarks of India that you should check out. 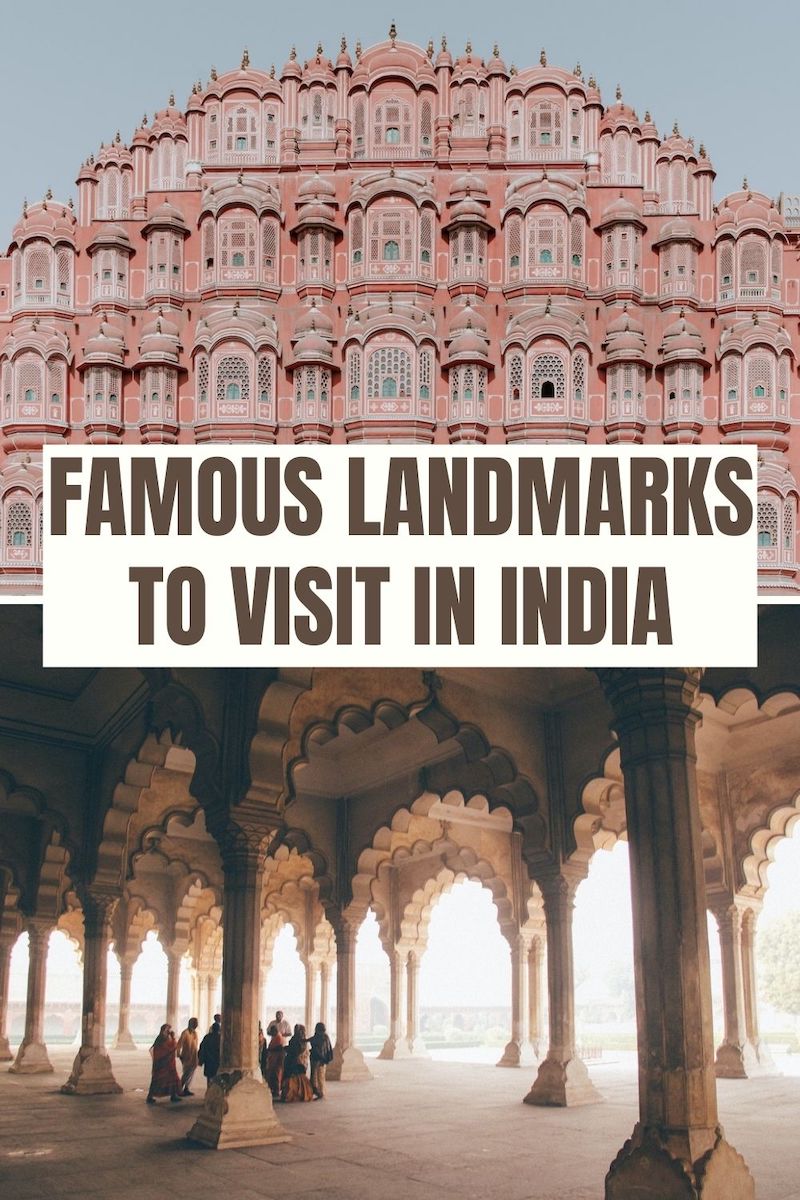 The Taj Mahal is an Indian landmark that needs very little introduction. This iconic landmark is situated on the right bank of the sacred Yamuna River. This stunning palace in Agra is an architectural marvel masterpiece made entirely out of white marble.

This impressive structure was built by Mughal Emperor Shah Jahan for his favorite wife, Mumtaz Mahal, and was completed in 1648. The 42-acre (17-hectare) complex houses the tomb of Shah Jahan and his wife.

The Taj is one of the best examples of the Mughal Empire’s influence and became a World Heritage Site in 1983. The touching story of this iconic landmark continues to attract visitors from around the globe and it remains one of the most important sites in India. 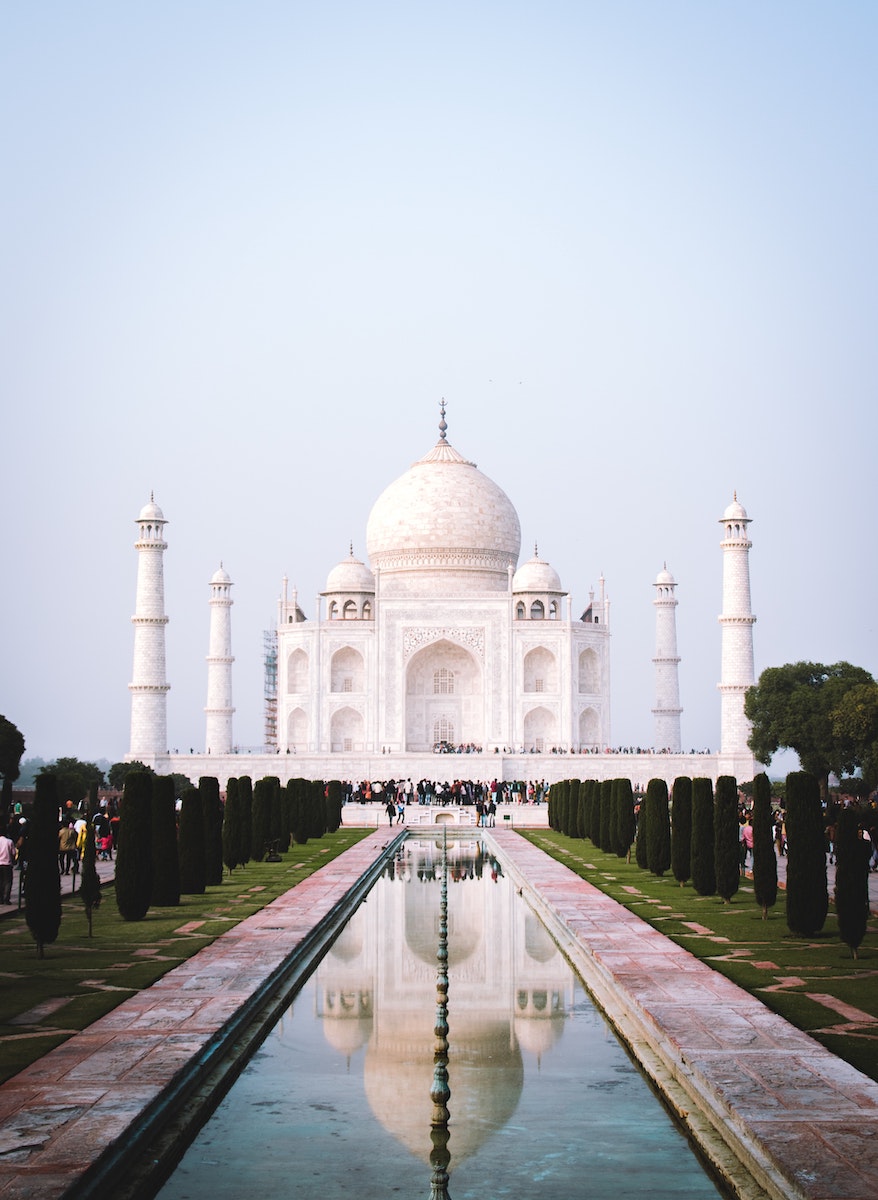 The imposing Agra Fort is a sister landmark to the Taj Mahal. This famous monument served as the main residence of prominent figures in the Mughal Dynasty until the mid-1600s. It was inscribed as a World Heritage Site along with the Taj in 1983.

One of the most notable palaces is the Jahangir Palace which was also constructed by Shah Jahan. The fort houses a Justice Chamber and residential complexes. One of Agra’s most notable sites is the intricately designed Ghaznin Gate. 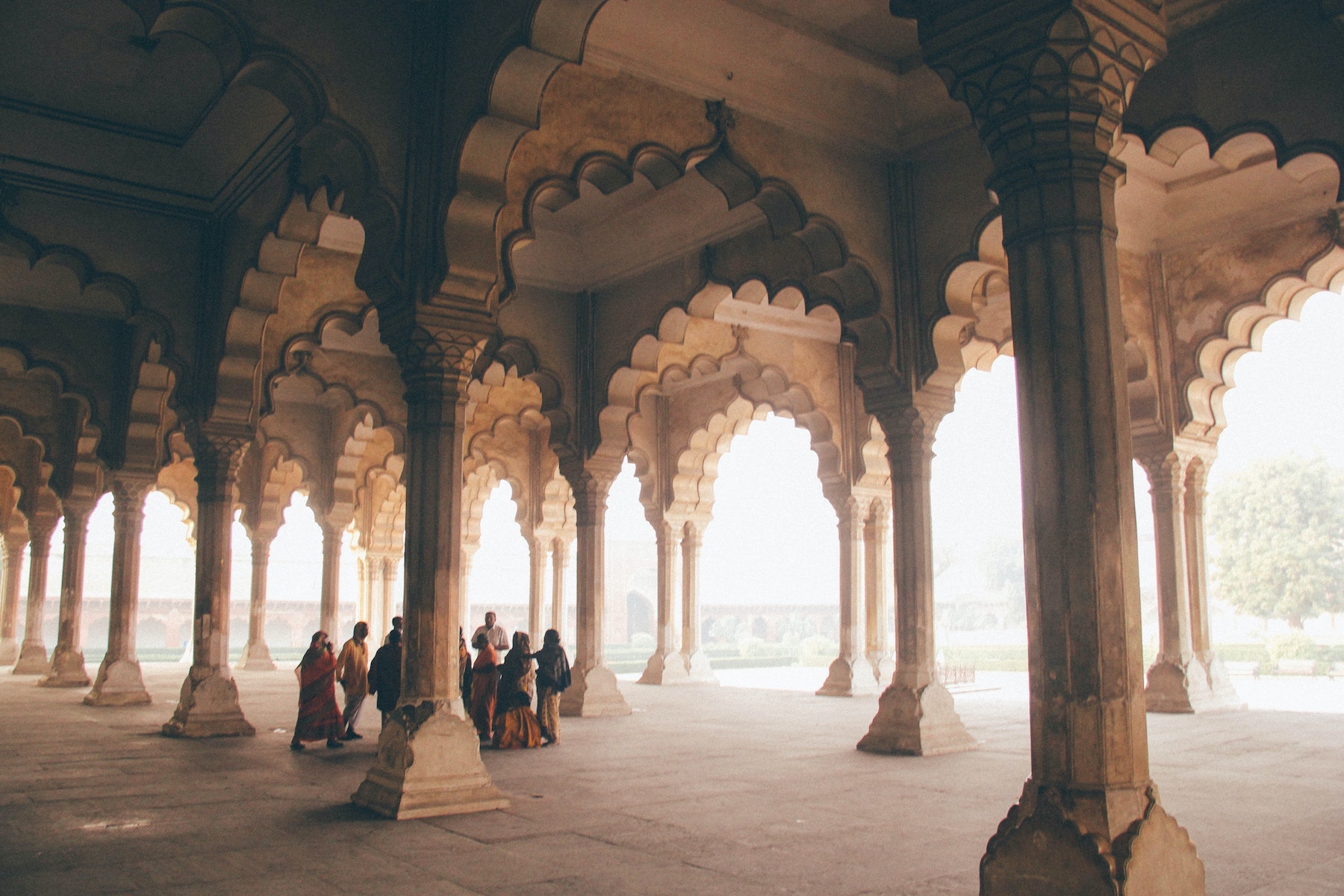 The vibrant city of New Delhi is known for many things, including hosting some awesome music festivals and awe-inspiring landmarks.

Standing at a staggering 138-feet (42-meters) tall, the India Gate is one of the most recognizable landmarks in India. This monumental structure is a stunning sandstone arch located at the end of the Rajpath ceremonial boulevard in New Delhi.

The India Gate is a war memorial dedicated to the brave Indian soldiers who died during the Anglo-Afghan War and World War II. The arch was designed to resemble the Arc de Triomphe in Paris.

The arch has the names of thousands of soldiers inscribed on its walls. This historical monument is surrounded by manicured lawns and is a popular picnic and relaxation spot amongst locals and visitors.

One of the best times to visit the India Gate is after sunset when the gate is lit up with soft golden lights against the dark sky. It makes the perfect backdrop for some spectacular photos. 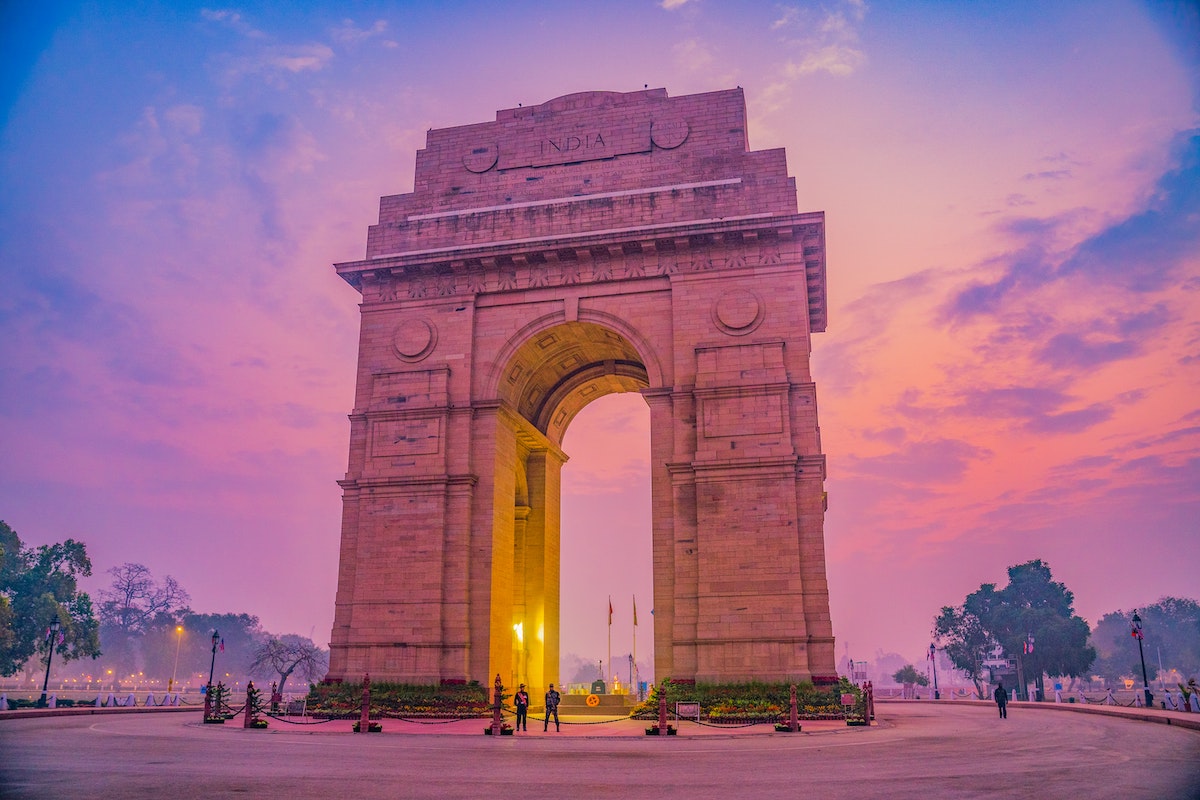 The Masjid-i Jahan-Numa, commonly known as the Jama Masjid, is the second-largest mosque in India. Its name means “World Reflecting Mosque” and is an impressive example of Mughal architecture.

This Indian landmark was commissioned by the legendary Mughal emperor Shah Jahan and was constructed between 1650 and 1656. It is estimated that around 5000 workers helped to build this impressive complex.

The Jama Masjid is intricately decorated with red sandstone and white marble. It features three gates, four towers, and a 325-meter courtyard with a well. 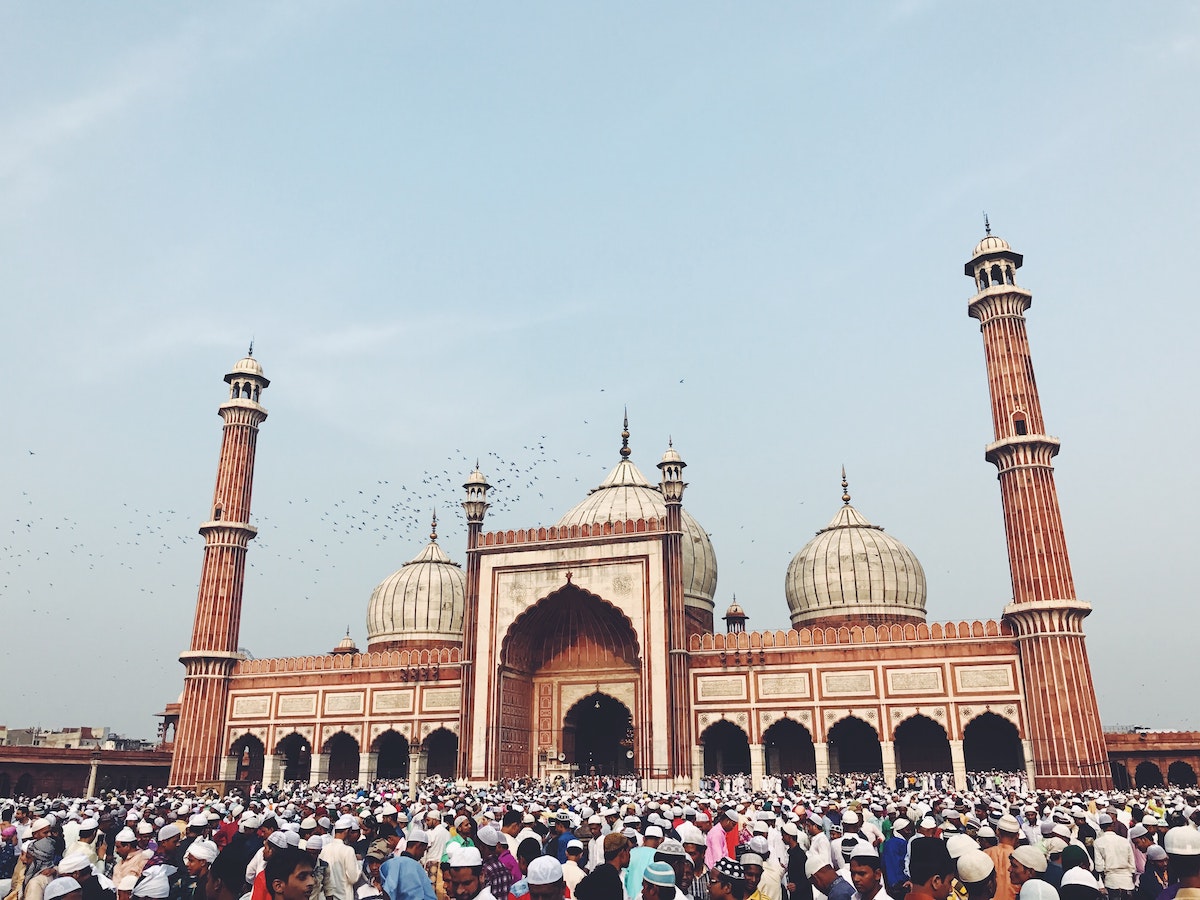 The Lotus Temple is another one of India’s famous landmarks located in New Delhi. The temple is one of nine Baha-i-Faith houses of worship, also known as Mashriqs, in the world.

The temple opened in 1986 and derived its name from its flowerlike shape. The Lotus Temple is characterized by a nine-sided construction, in line with the Baha-i-Faith’s belief in the mystical properties of the number nine.

This stunning temple is situated on 26-acres (10 hectares) of land and is surrounded by nine pools. It features red sandstone walkways, like many other Indian landmarks. It has 27 white marble petals surrounding it, all grouped into three to form nine sides.

The Lotus Temple attracts millions of people from around the globe for peace, meditation, and study. It is considered one of the most beautiful places of worship in the world and has become a prominent feature in the city. 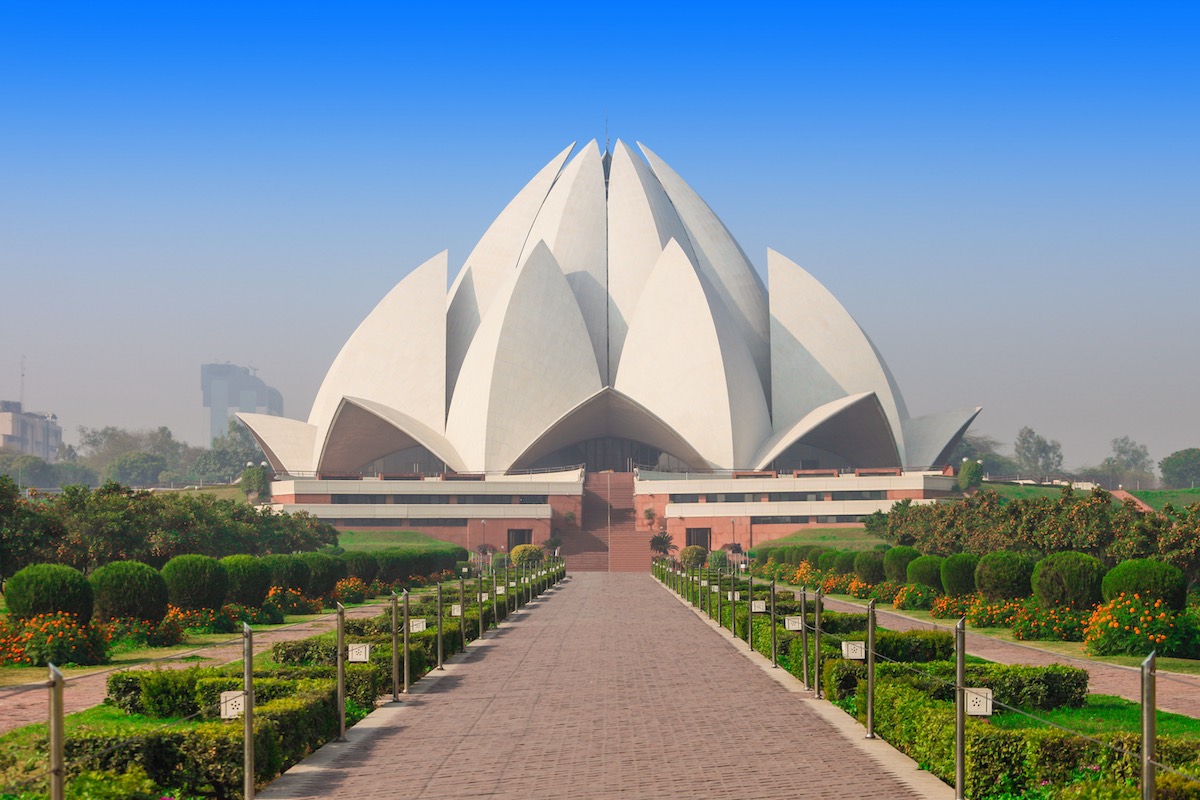 This impressive landmark is a staggering 238-feet (73-meter) tall minaret, also known as “The Victory Tower”. It was constructed by Qutb al-Din Aibak, a sultan in South Delhi, and was completed in 1193.

The tower marks the victory of the defeat of the last Hindu kingdom in Delhi by Qutb Aibak. It is made up of five different stories, each having its own balcony. The first two stories are made from sandstone and marble, while the remainder of the tower is made from red sandstone.

The first story houses, the Quwwat-ul-Islam Mosque. If you’re keen to see one of the most important symbols of Islamic architecture, then the Qutub Minar should be on your list of landmarks to visit. 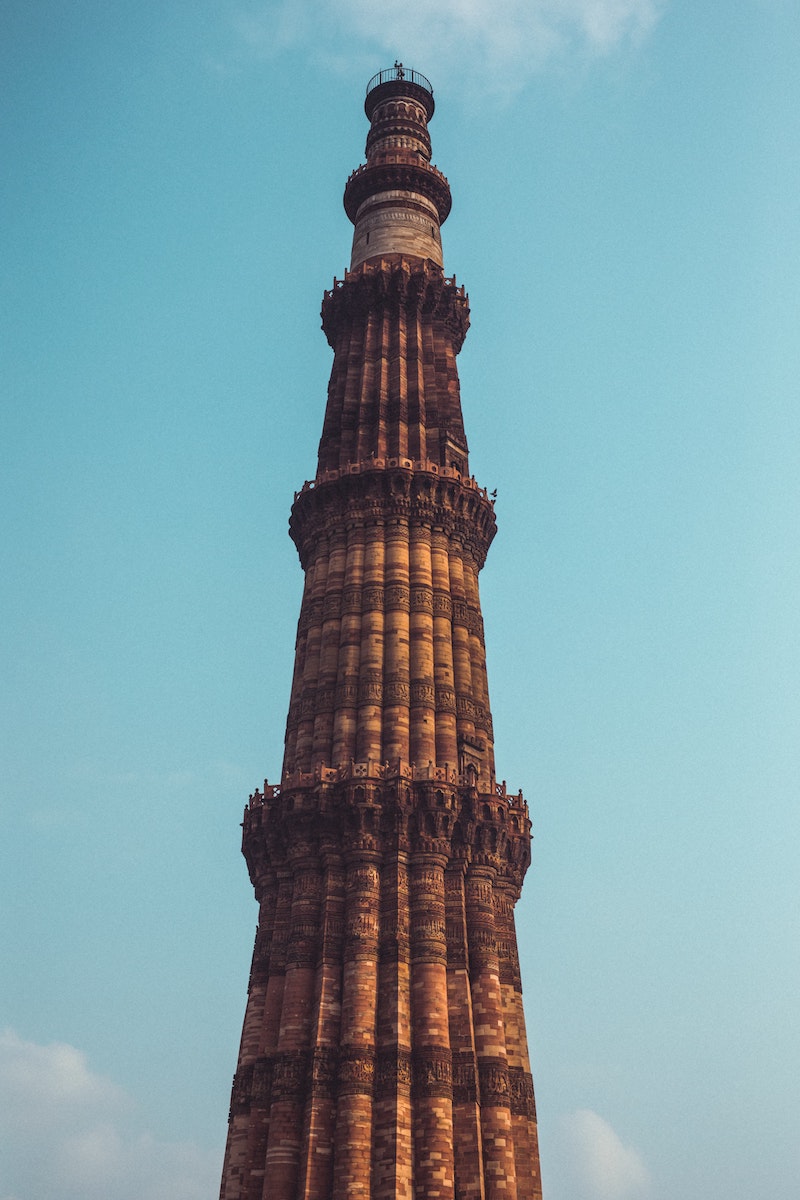 The City Palace is considered to be the gatekeeper of Jaipur’s history. As one of the most historical monuments in the city, it draws thousands of visitors from around the globe.

This Indian landmark is one of grandeur and has several buildings, courtyards, galleries and restaurants, and the Maharaja Sawai Man Singh II Museum. One half of the palace complex still serves as the official residence of the Royal Family of Jaipur.

The palace is an impressive work of Indian architecture and features elaborate gates, doorways, and murals. The palace was built in the 17th century by Sawai Jai Singh, who is considered the founder of Jaipur. 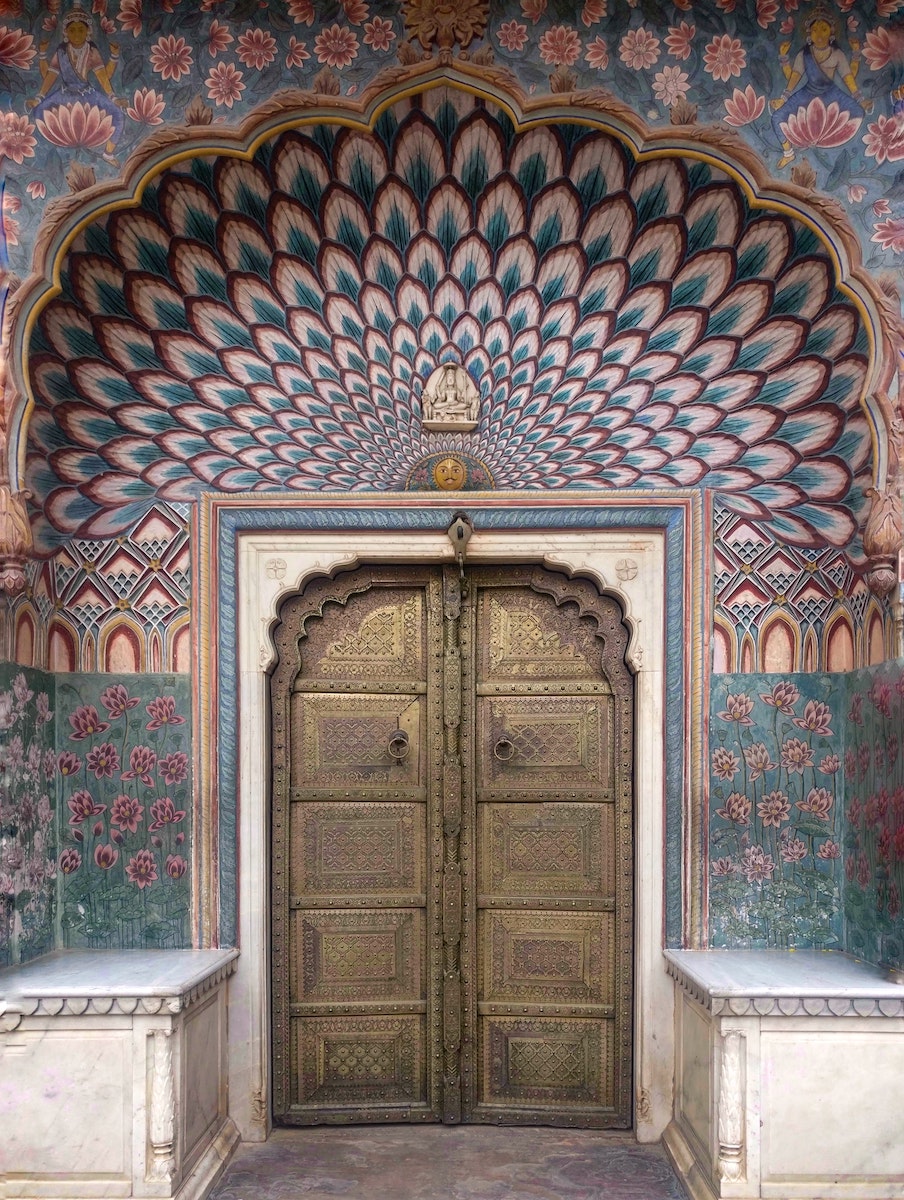 Known as the “Palace of Winds”, the Hawa Mahal is one of the most recognizable landmarks in Jaipur. The Hawa Mahal is a beautiful five-story pink palace that was built as an extension to the City Palace.

It was constructed in 1799 by Maharaja Sawai Pratap Singh, who built it for the ladies of the royal household so that they could watch the people of the city and street festivals while remaining out of the public eye.

The Hawa Mahal is made from red and pink sandstone and rises 49-feet (15-meters) over the city. It was designed to look like Lord Krishna’s crown and has about 953 windows across five floors.

Today the palace has amazing views of the busy city street below it as well as the Sireh Deori Bazaar, City Palace, and the Jantar Mantar Observatory. 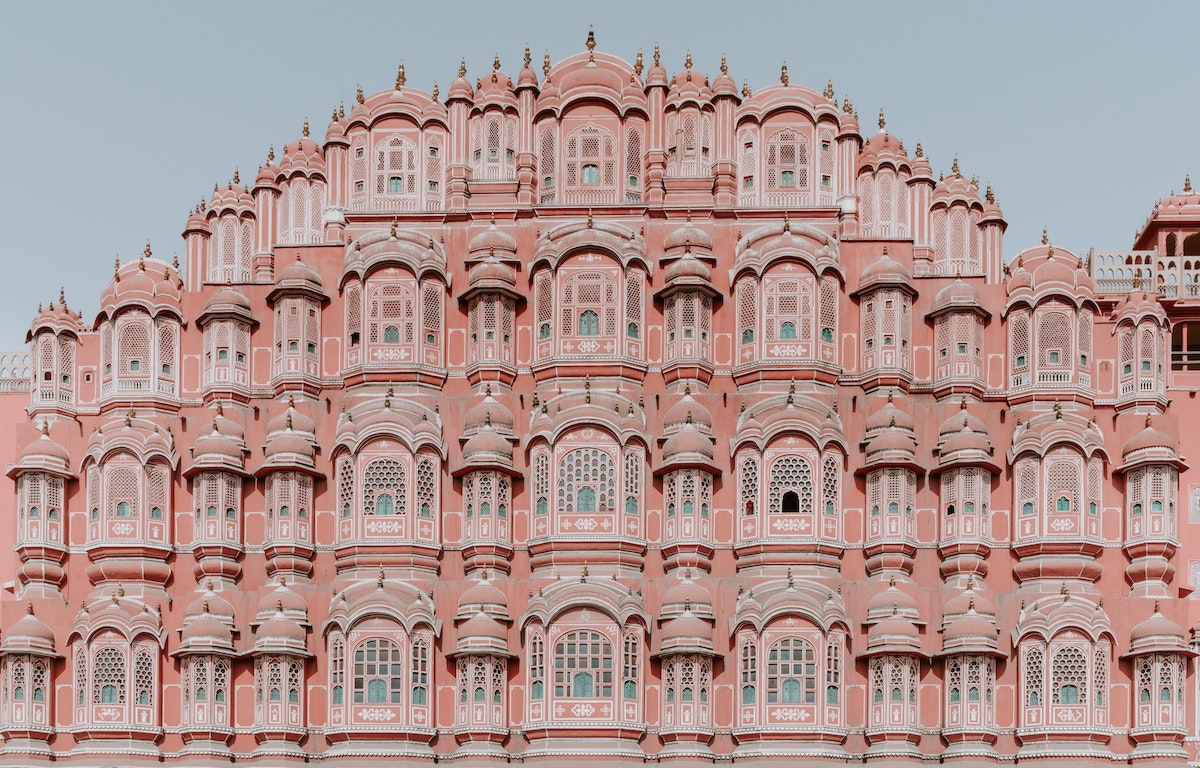 One of the most impressive landmarks of India is the Gateway of India in Mumbai. It is a magnificent display of both Gujarat and Islamic architecture. It’s situated near the end of the Apollo Bunder waterfront and overlooks the gorgeous Arabian Sea.

This arch monument was constructed to commemorate the visit of King George V and Queen Mary in 1911. It later served as the ceremonial entrance gate to India for the Viceroys and Governors of Mumbai, then known as Bombay.

Today the Gateway of India is one of the top attractions in Mumbai, and the area around it teems with street vendors, balloon sellers, and tea hawkers. 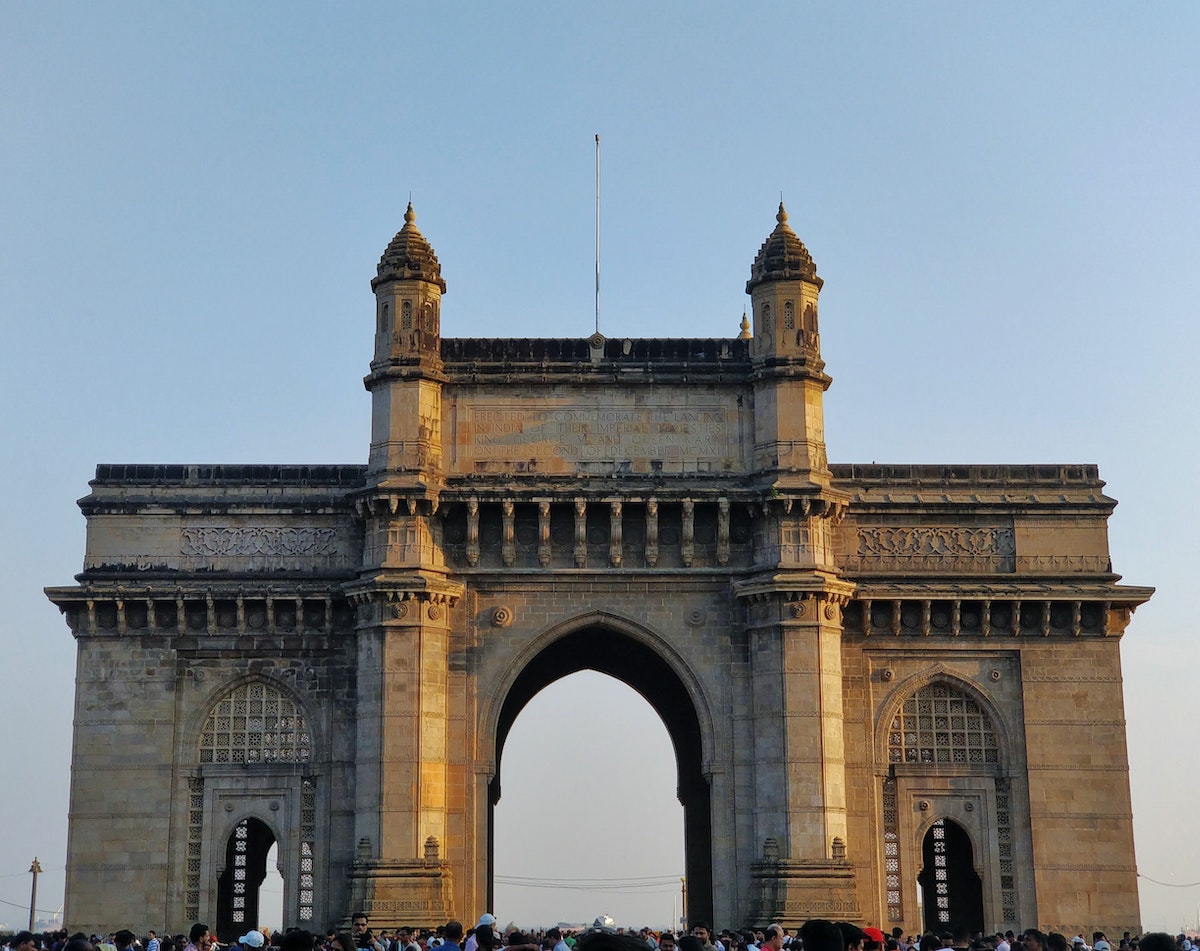 One of the most famous Indian landmarks, the Charminar Monument, is considered a symbol of Hyderabad. This iconic landmark features an impressive display of Muslim Turkoman architecture.

The Charminar Monument is a square structure constructed in 1591 by Muhammad Quli Qutb Shah, the fifth ruler of the Qutb Shahi Dynasty. The structure is made from lime mortar and granite.

This elaborate monument has four minarets on each of its corners which all stand at 160-feet (48.7-meters) tall. The minarets are believed to symbolize the four Khalifas of Islam.

While the Charminar Monument is a beautiful sight during the day, its true beauty is displayed at night. As the sunsets, the monument is lit up with an array of colorful lights that highlight its intricate design details. 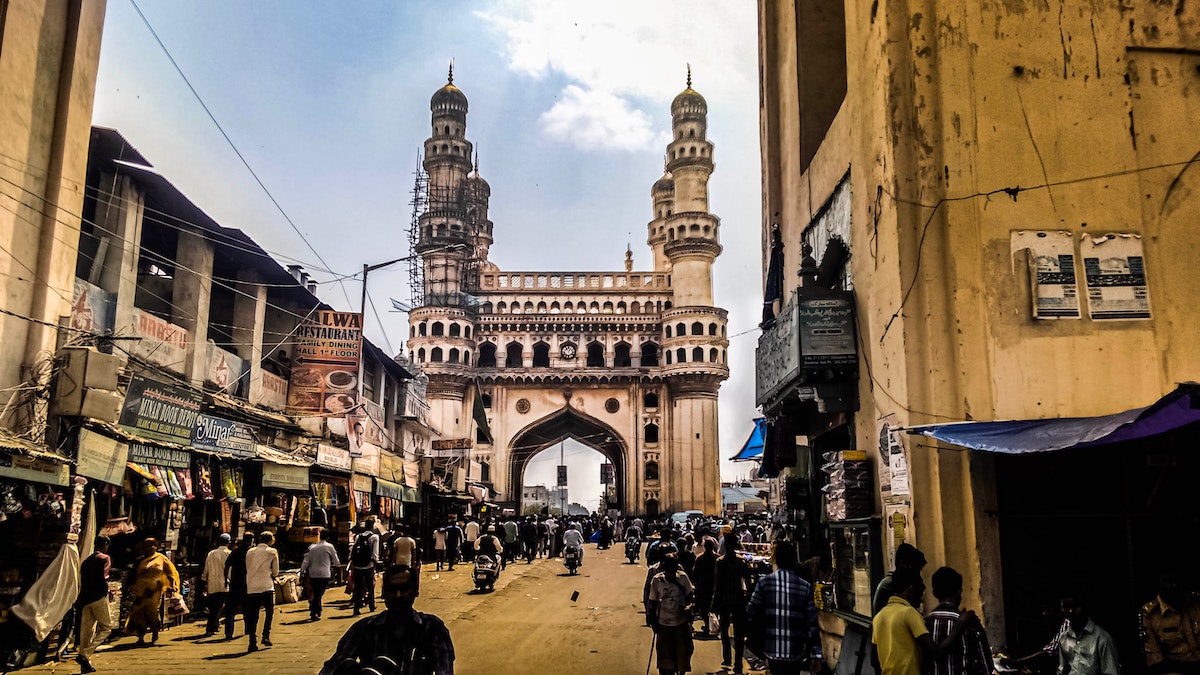 Situated just 5-miles (8-km) west of Hyderabad near the Hussain Sagar Lake sits one of the most magnificent fort complexes in India, the Golconda Fort.  It dates back as far as the 11th century when it was just a mud fort under the reign of Rajah of Warangal.

The Golconda Fort was later fortified between the 14th and 17th centuries by the Qutb Shahi rulers and Bahmani Sultans. It also served as the capital of the Qutb Shahi leaders.

Over the centuries, the Golconda Fort has played an important role in the trade of diamonds and the protection of diamond mines in the area. The most famous diamond, the Koh-i-Noor, which sits in Queen Elizabeth’s crown, comes from this area.

It is said that if you clap your hands at the bottom of the fort, people who are standing on the hilltop pavilion above the fort will be able to hear the echo. 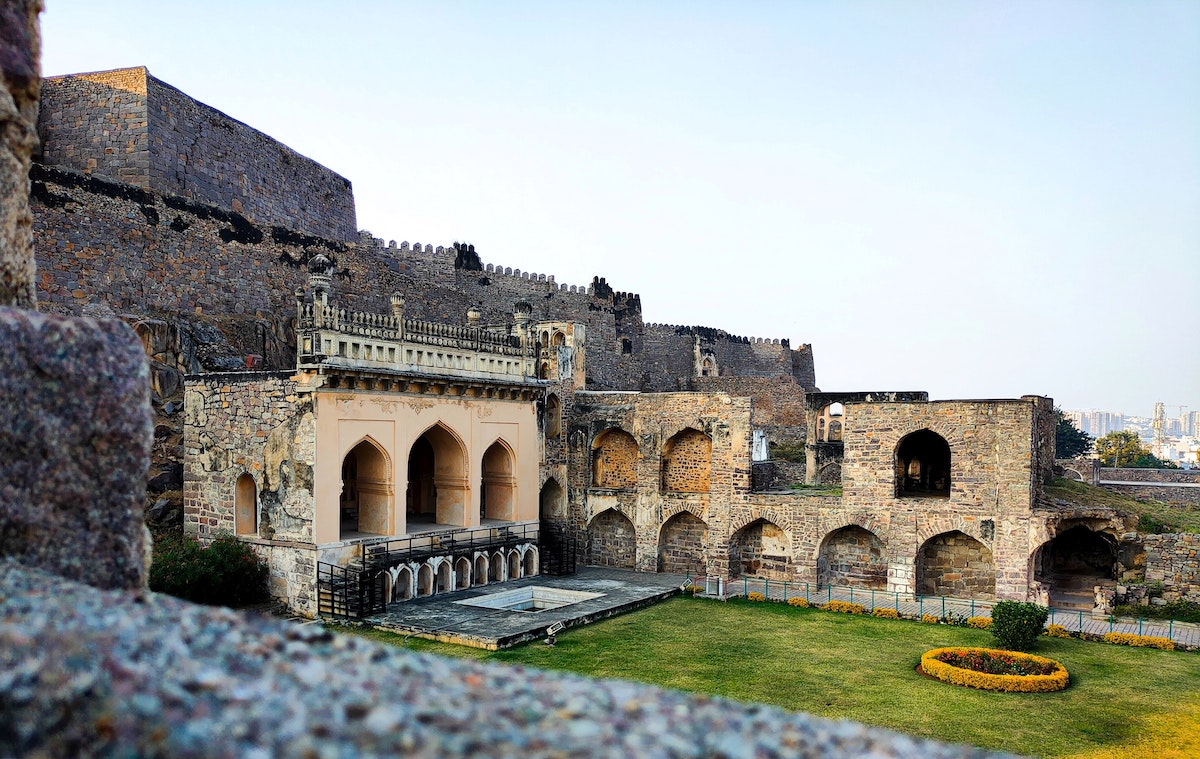 The Victoria Monument is one of the most beautiful Indian landmarks. This impressive white marble building in Central Kolkata was constructed between 1906 and 1921.

It was built to commemorate Queen Victoria’s 25-year reign over India but now serves as a museum. Spreading across 64-acres (25-hectares) of land, it is the largest monument in the world dedicated to a member of the British Royal Family.

While the outside is impressive, the interior is just as grand and houses the central chamber and Culcutta Gallery. The gallery has wonderful exhibitions that trace back the city’s colonial-era history.

The Victoria Monument is surrounded by well-maintained gardens and ponds. If you stick around until the evening, you’ll get to watch the Sound and Light show that illuminates the building and shows off its ornate details. 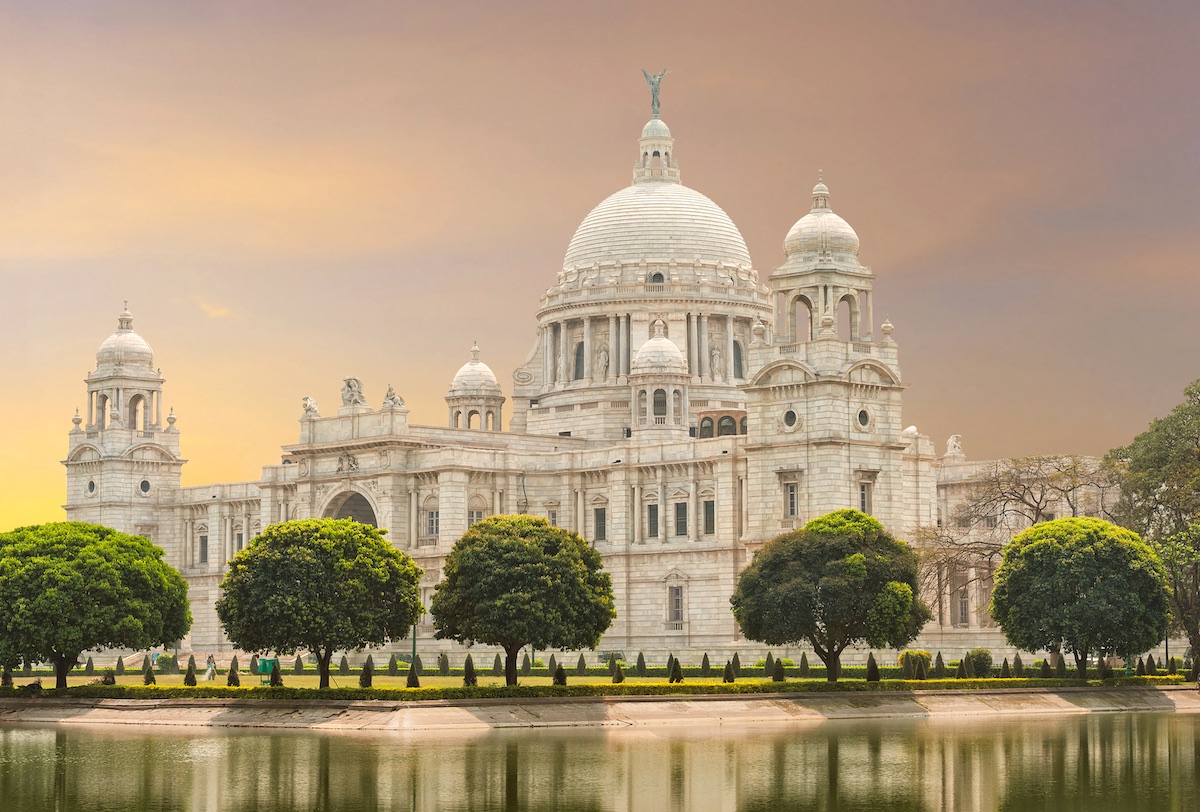 The Ajanta and Ellora Caves are two of the most unique landmarks in India. Located in Aurangabad, Maharashtra, these interesting UNESCO World Heritage Sites are the largest temple-cave complexes in India.

They are filled with unique paintings and artwork that date between 600 ‒ 1000 CE, and both cave complexes were carved out entirely by hand. Both caves are considered to be some of the best examples of rock-cut architecture in the world. 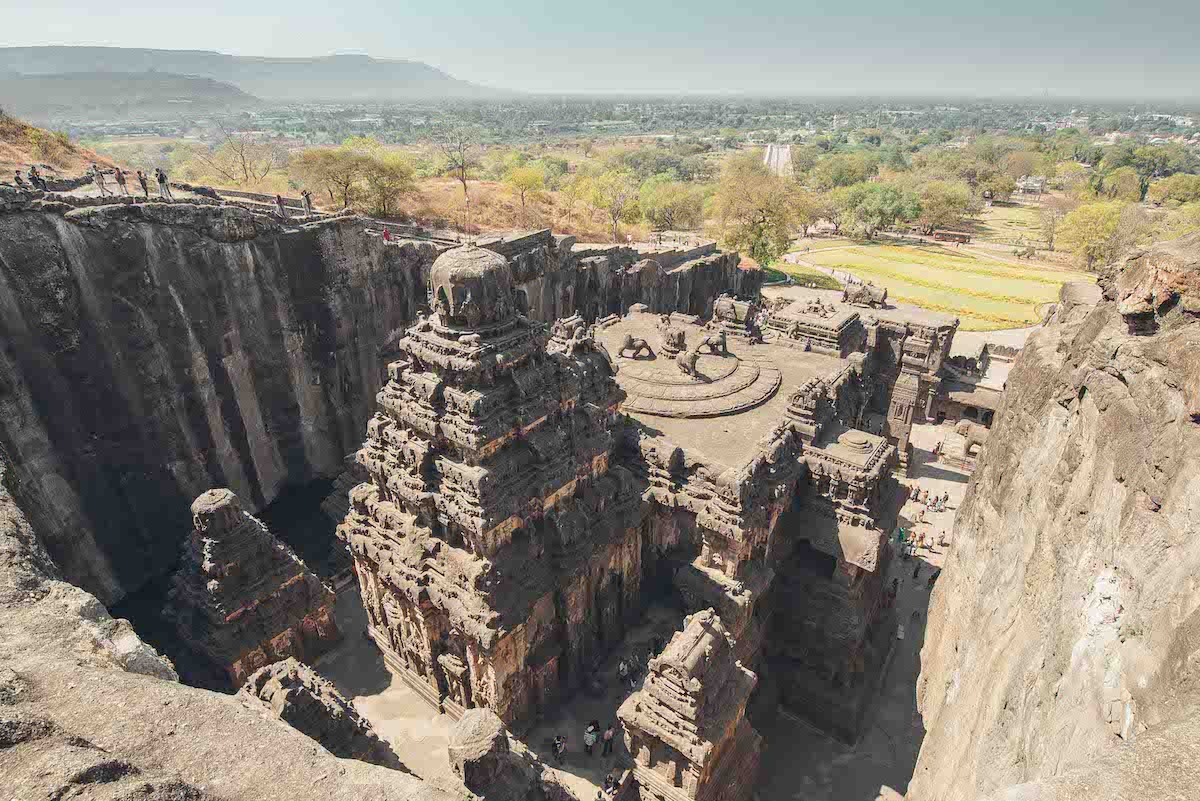 The Konark Sun Temple is located along the coastline of Odisha. It is dedicated to the Hindu sun god, Surya. It is one of the few sun temples in India and is by far the most popular.

The temple was built in the 13th Century by King Narasimhadeva I. It was built to resemble a chariot and features Khondalite rock wheels, walls, and pillars. It was carefully designed so that the sun’s rays would strike the main entrance of the temple at the start of a new day.

In 1984 the Sun Temple was inscribed as a UNESCO World Heritage site, and it continues to draw many tourists and Hindu pilgrims each year. 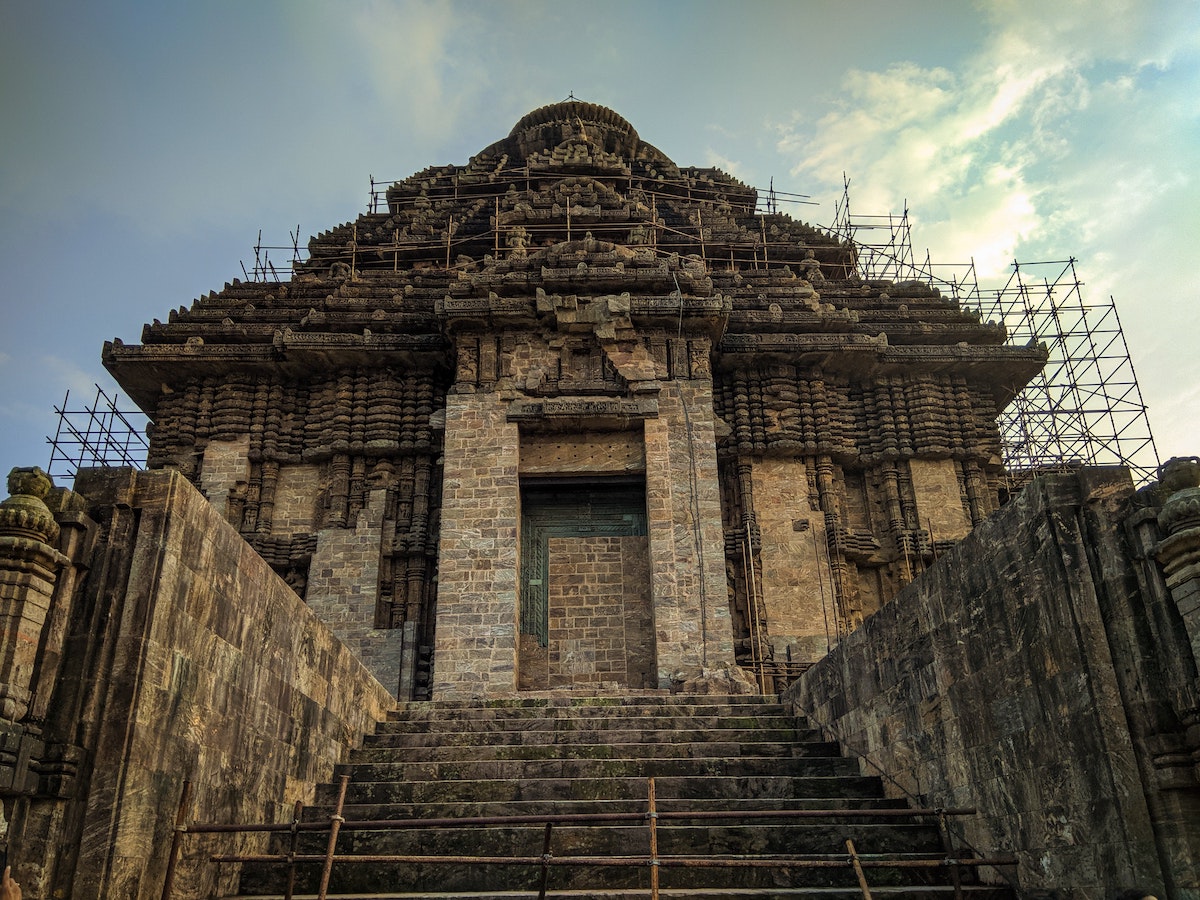 Planning A Trip To Asia?

Check out the following if you’re planning on traveling to India and other Asian countries: 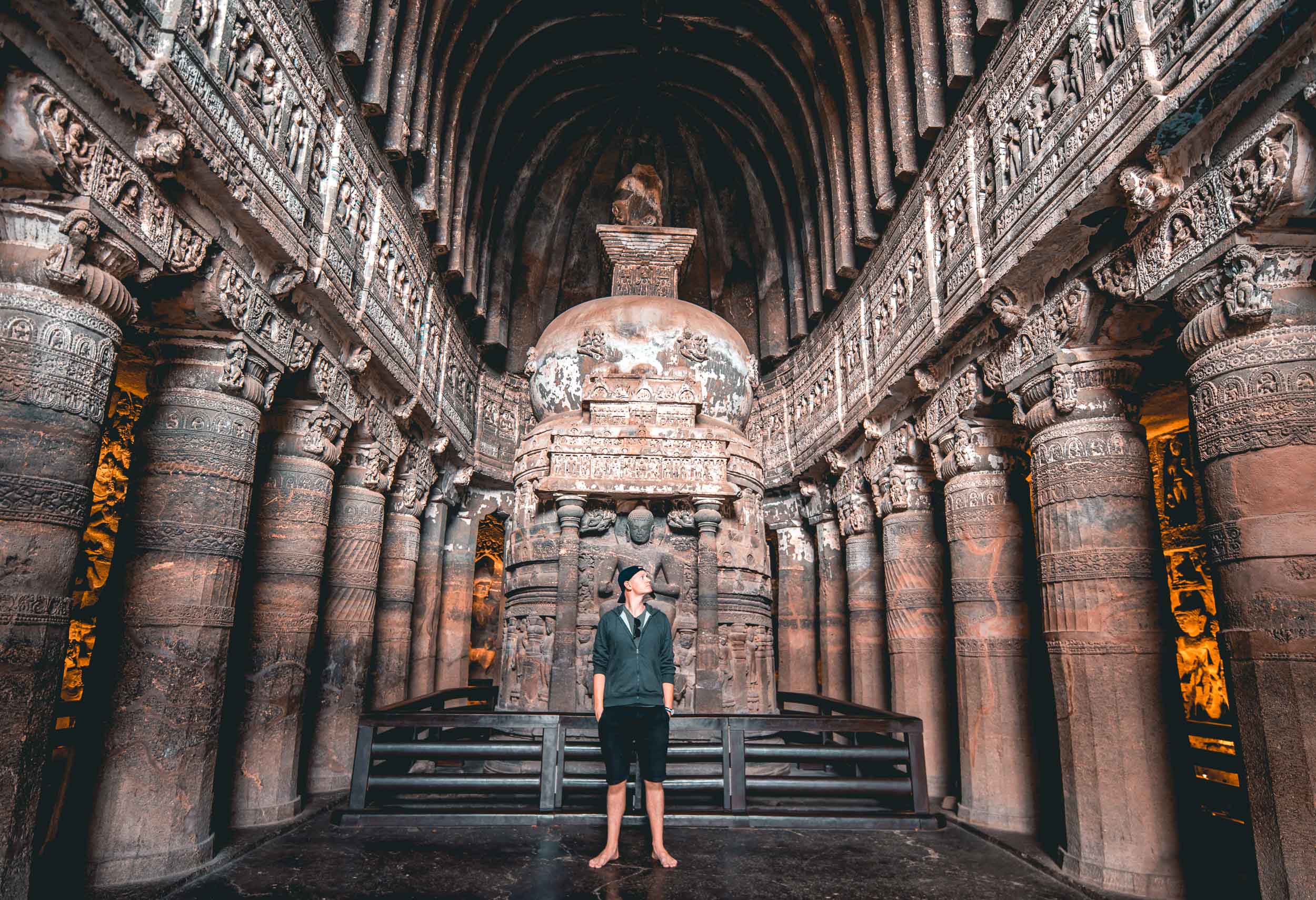 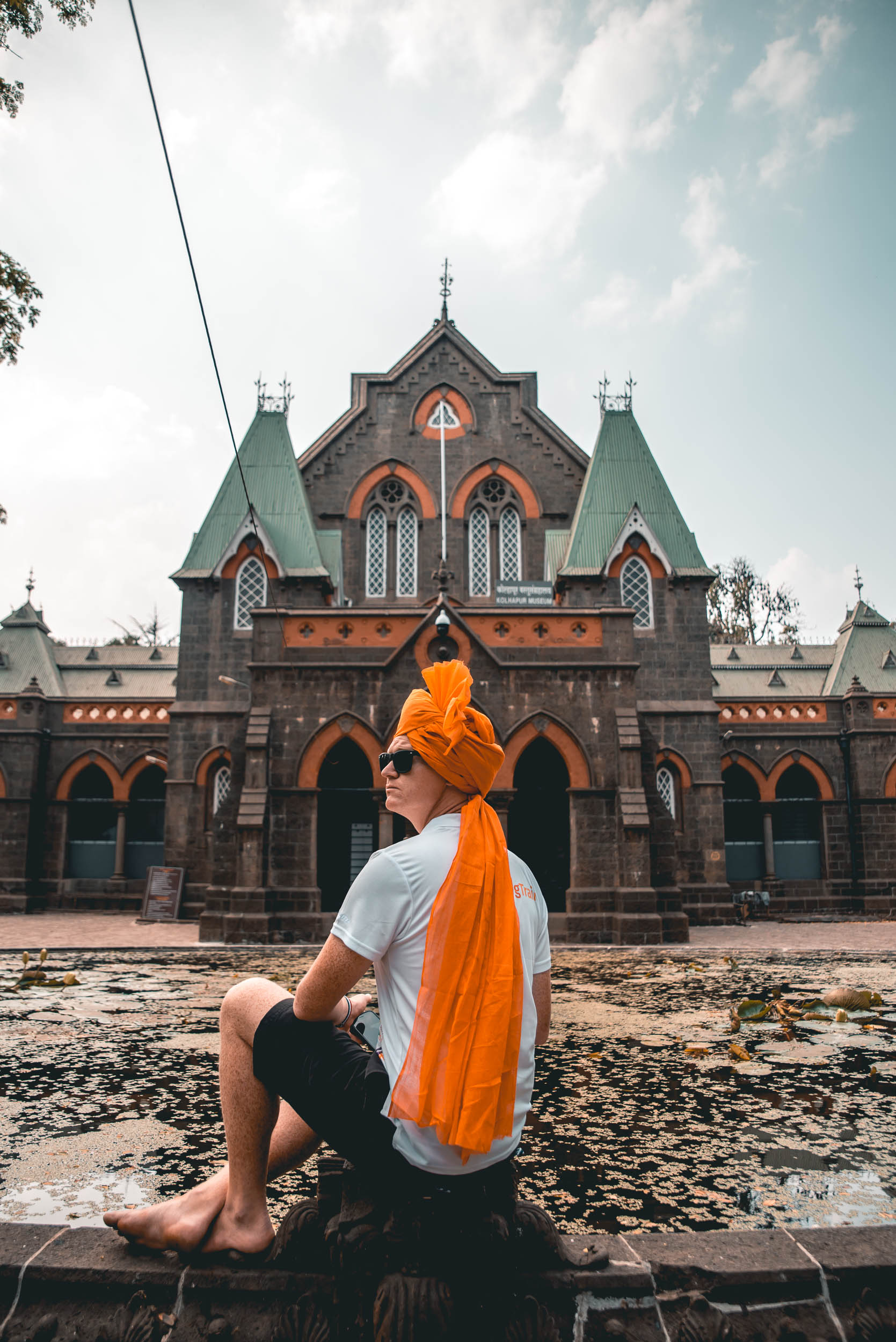 THANK YOU FOR READING THIS LIST OF MY FAVORITE INDIAN LANDMARKS!