The famous landmarks in Mexico are an assortment of ancient temples and fascinating natural wonders.

This exotic paradise, known for introducing jalapenos, Tequila, and Salma Hayek to the world, is more than a spring break vacation spot. It’s also a must-visit country filled with heaps of culture, history, and tradition – not to mention an amazing Mexico music festival scene.

Mexico is breathtaking and a fascinating place to travel to. It’s an inexpensive destination with so much to offer anyone who sets their navigators in its direction. So, here are the best of Mexico’s attractions and landmarks you must see to feed your ravenous travel bug.

Chichen Itza is one of the man-made Seven Wonders of the World. It sits near Mexico’s eastern coast, showing off the famous Temple of Kukulcán. The temple made its Hollywood debut as the execution spot in Mel Gibson’s Apocalypto.

The sprawling archaeological complex dates back over 1500 years, Chichen Itza is one of the most visited Mexico tourist attractions. The design of the temple has special astronomical significance.

Each face of the pyramid has a stairway with 91 steps. Together with the shared step at the top, they add up to 365 – the number of days in a year.

Other highlights of Chichen Itza include the Great Ballcourt and El Caracol, a circular temple that served as an astronomical observatory. For those who relish in facts and figures, and marvel at the achievements of ancient civilizations, Chichen Itza is an absolute must.

Situated on the east coast of the Yucatán Peninsula, Tulum once served as the major port of the Mayan city of Coba. Built around 1200 AD, these ruins are the only ones built by the sea.

The main pyramid at Tulum is named El Castillo and was used as a lighthouse during ancient times. This is due to the positioning of the pyramids’ windows at the top of the tower. This mythical place was originally built to be a fortress. The Mayans felt they needed protection and chose to build this overwhelming fortress to keep an eye on possible invaders.

The tropical beach backdrop however makes this a stunning Mexico top attraction that should not be missed. 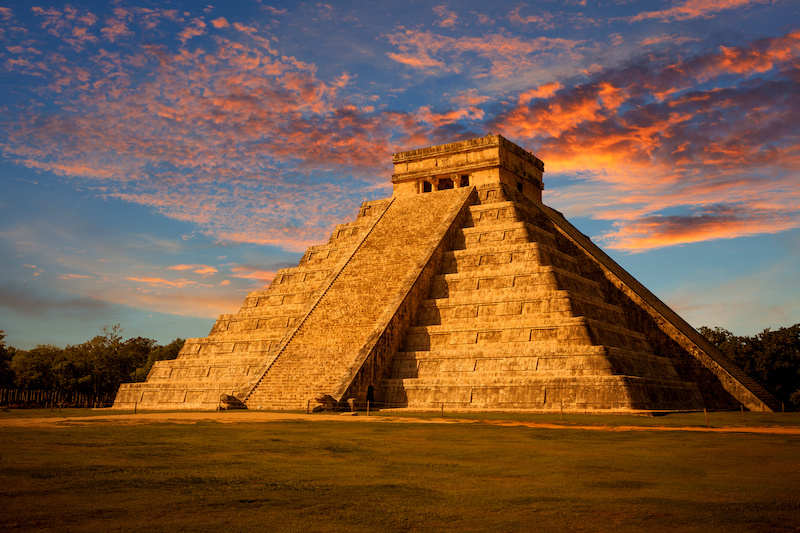 Deep within the Mexican jungle, surrounded by incredible wildlife that could only be documented in a Netflix series, lies the Palenque temples. Discovered in the 16th century by a Spanish explorer, it is believed that the temples date as far as 200 AD.

The most interesting part of Palenque is the tomb of Pakal the Great that lies inside. After becoming ruler at the tender age of 12, Pakal ordered that most of Palenque be rebuilt. In doing so, he demanded that events should also be recorded in detail. Thanks to his genius, this offered archeologists incredible insight into what life was like there. 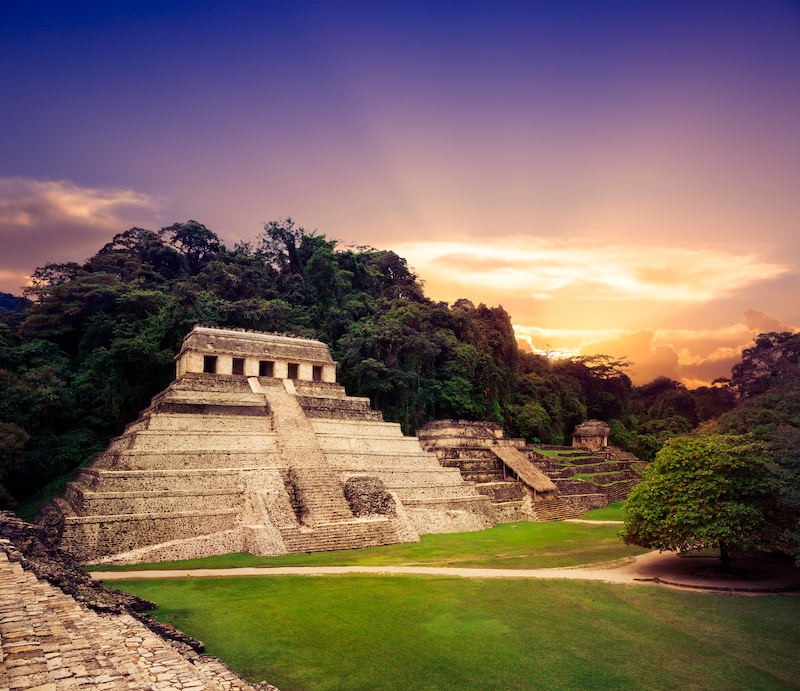 The journey through the canyon lets you explore incredible scenery as your train weaves in and out of the thick jungle and ravines. Depending on the route you travel through, the canyon journey can take between 9 and 16 hours. It’s recommended that visitors plan a stop or two while sightseeing the canyon to visit local villages and sites. 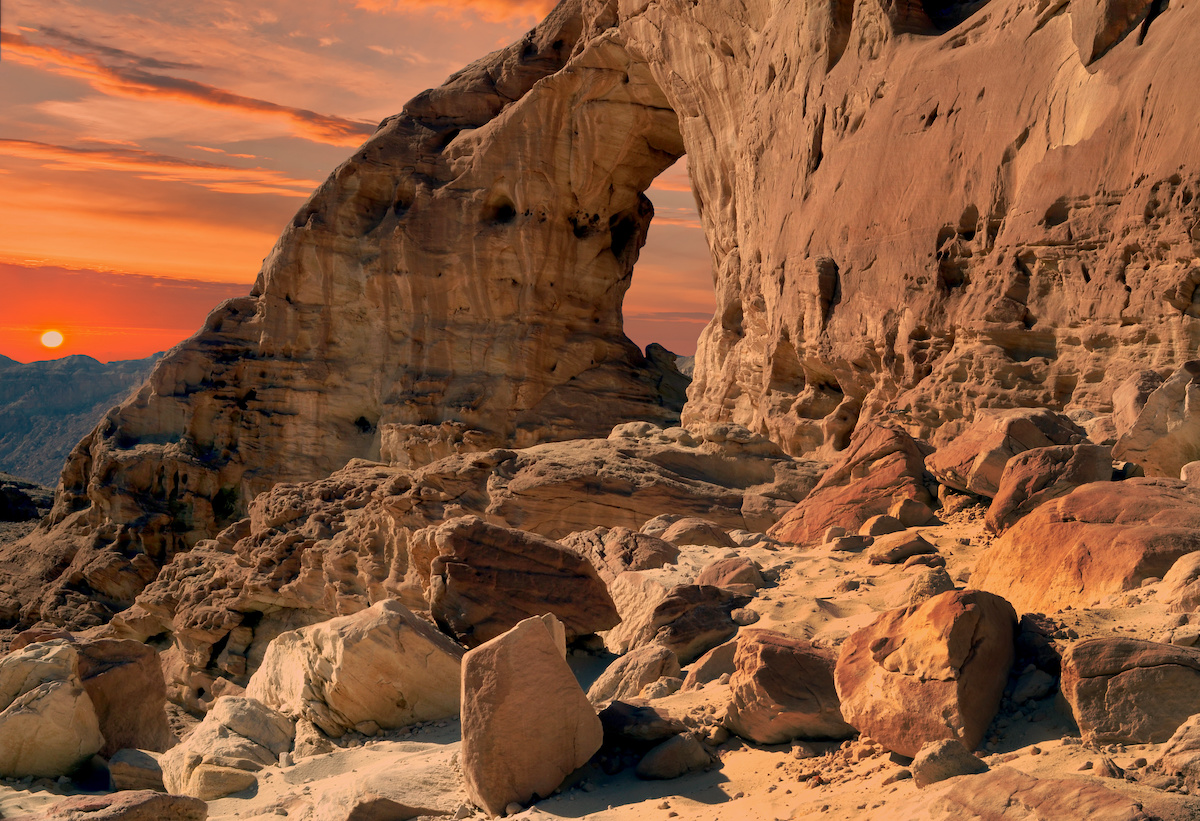 5) The National Museum of Anthropology

The National Museum of Anthropology is an important Mexico city landmark. It showcases a large and impressive collection of artifacts from the indigenous people of Mexico. The collection features a giant carved head of a fire serpent, a celestial calendar, and many other ceremonial headdresses of Aztec rulers.

The museum is a collection of minimalistic buildings with large courtyards and immaculate gardens. It’s a great place to learn more about the roots of Mexican heritage. 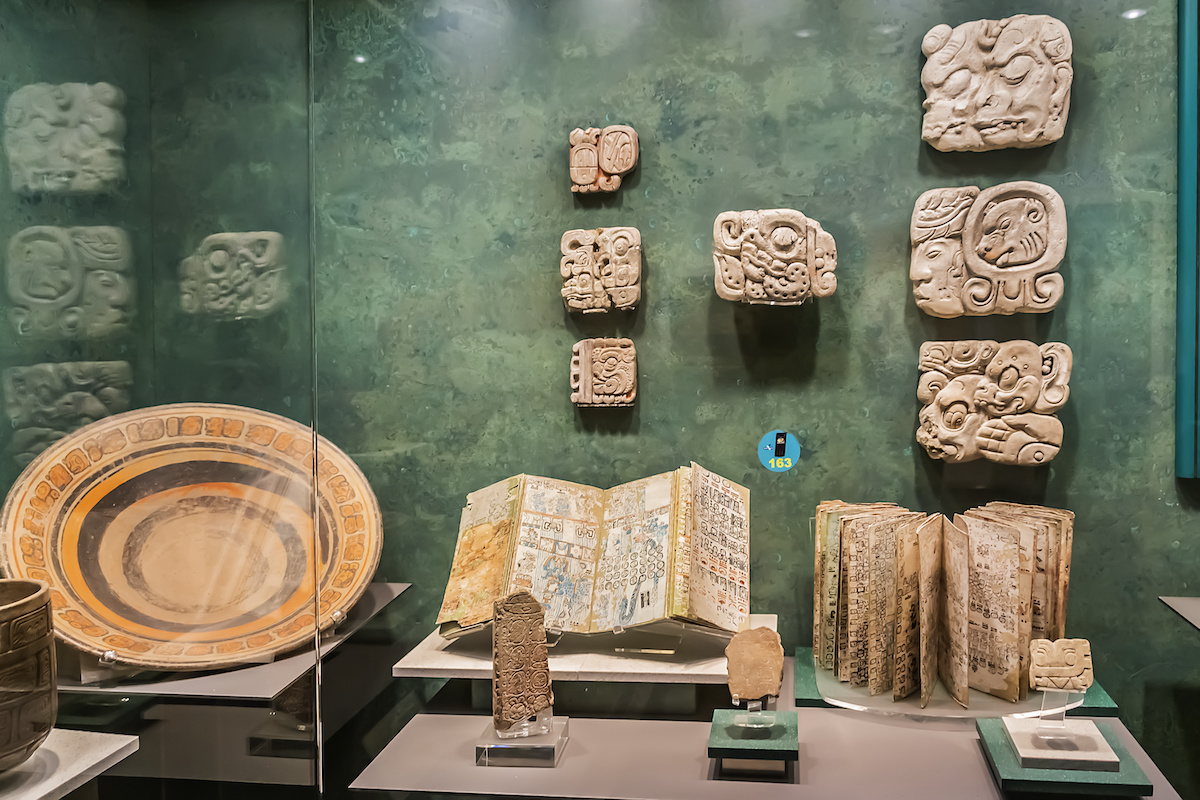 El Arco (The Arch) is a unique rock formation that marks the spot where the Pacific Ocean becomes the Gulf of California. The arch, found in Cabo San Lucas, has become an icon of the city and can be viewed from several different angles.

The natural attraction runs down to the water’s edge at Land’s End, the southern tip of Cabo San Lucas, and into the Sea of Cortez. From a distance, the rock formation is said to look like a dragon, while up close, the arch frames the sky, sea, and sand.

A stroll along the beaches of Cabo San Lucas will tempt you to take some amazing pictures of El Arco. Not to mention, the views of the blue waters and the gray whales that frequently frolic in the ocean will be the cherry on top. 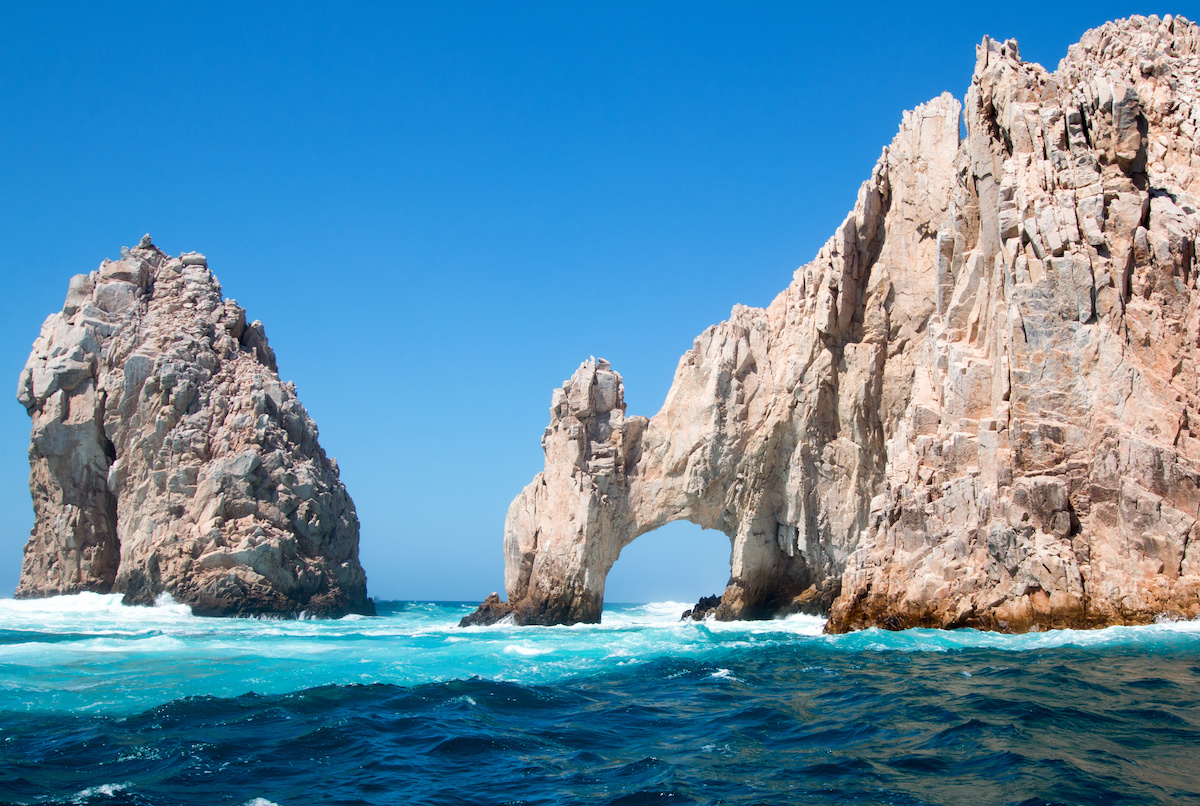 Cozumel is an underwater world located just off the Yucatan Peninsula. It’s a popular landmark in Mexico for scuba diving and snorkeling. Discovered by Jacques Cousteau in 1959, it has since become a National Marine Park to protect the delicate balance of its beautiful coral reefs and tropical fish. 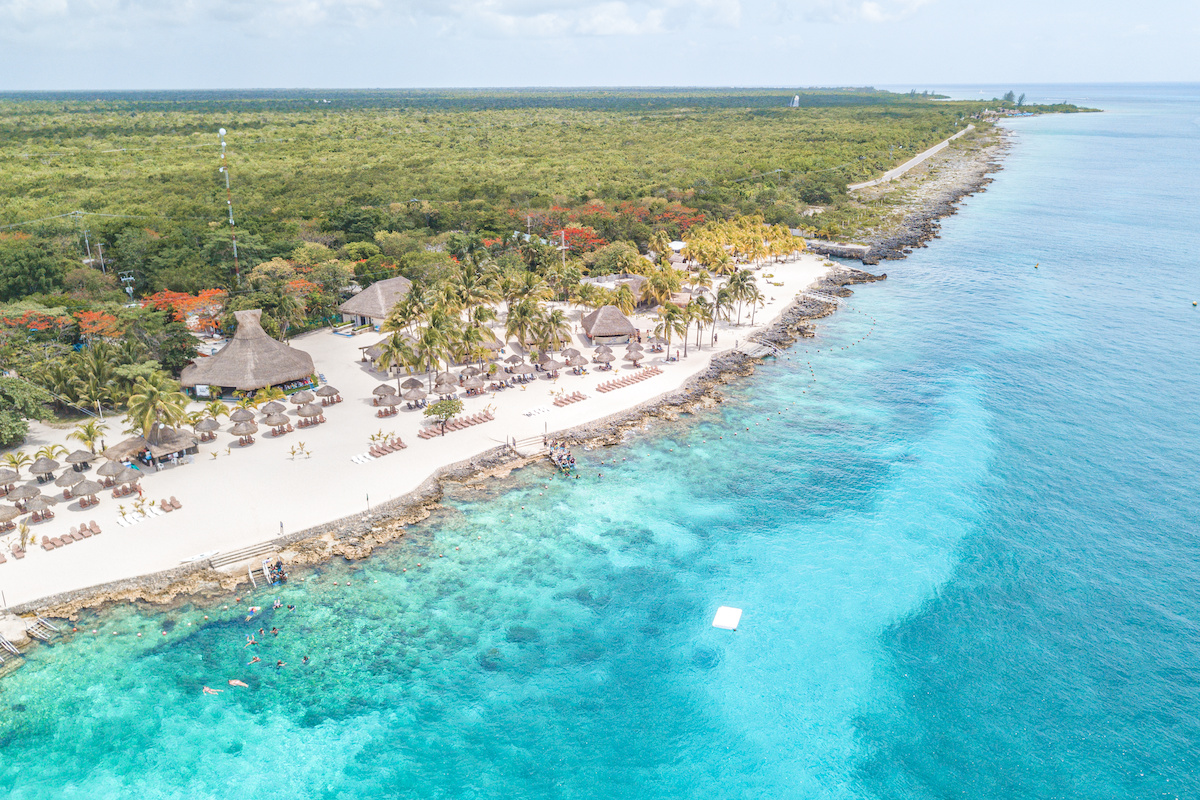 The towering Ángel de la Independencia monument stands on Paseo de la Reforma, one of Mexico City’s principal avenues. While visiting this iconic landmark, you can’t help but to also soak up the attractive surrounding areas.

During the presidency of Porfirio Díaz in 1910, Ángel de la Independencia was dedicated to those who fought for independence and is topped with the recognizable golden Greek goddess of victory, Nike. It now also acts as a mausoleum to the heroes of the revolution.

Catedral Metropolitana is another one of Mexico city’s famous landmarks. This grand building dates back to 1573 and has been featured on some popular Netflix telenovelas.

Besides its iconic TV debuts, the Catedral has the most exquisite Baroque architecture. Recently, it underwent some extensive restorations to ensure it’s preserved for future generations.

The entrance to the Catedral is guarded by two large towers which are encrusted in the mother of pearl. Inside, the decor is grand and impressive with a marble altar and many gilded carvings. It’s also home to a remarkable collection of religious and historical artifacts. 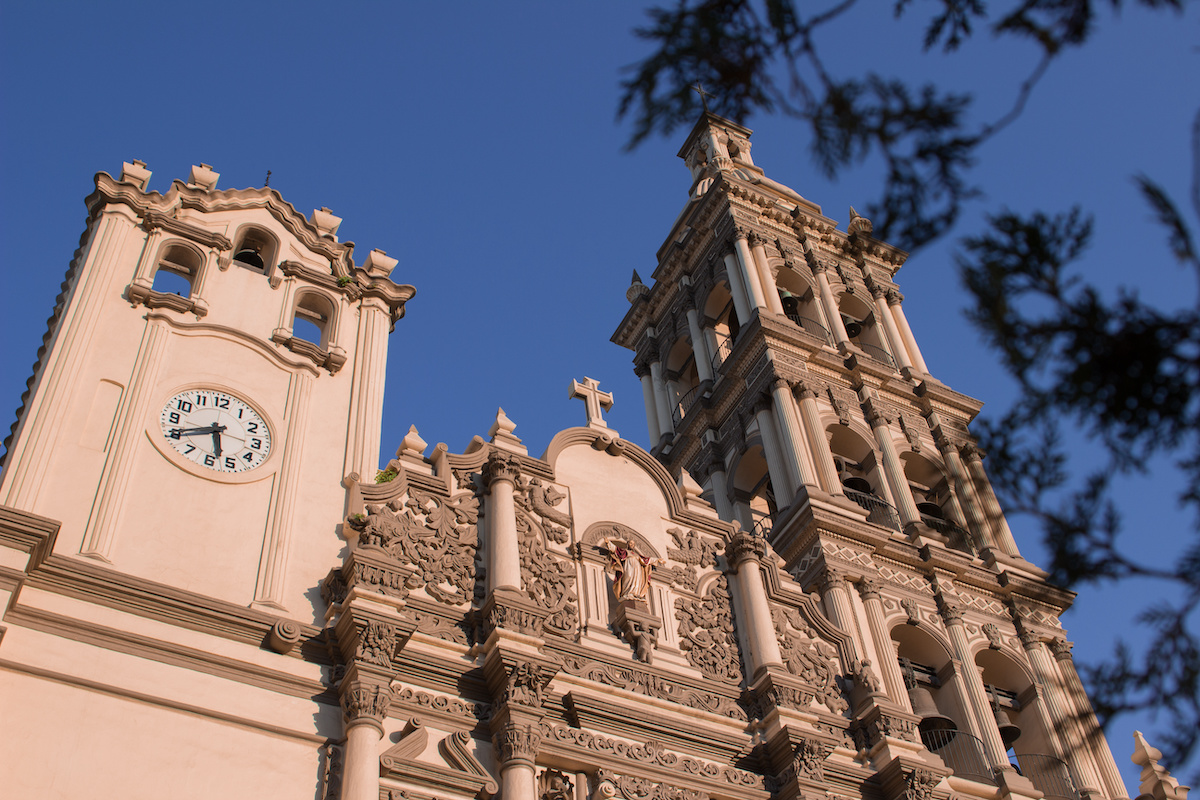 Quietly tucked away in the mountains of the Sierra de Guanajuato, is the enchanting colonial city of Guanajuato. The city was founded in 1554 next to one of the richest silver mining areas of Mexico.

The Guanajuato streets and their many colorful alleyways spread out in every direction while most of its traffic is served by a network of underground tunnels. This makes Guanajuato a pedestrian-friendly city. The city of Guanajuato has such an interesting history, culture, and beauty that it’s no wonder many flock to see it. 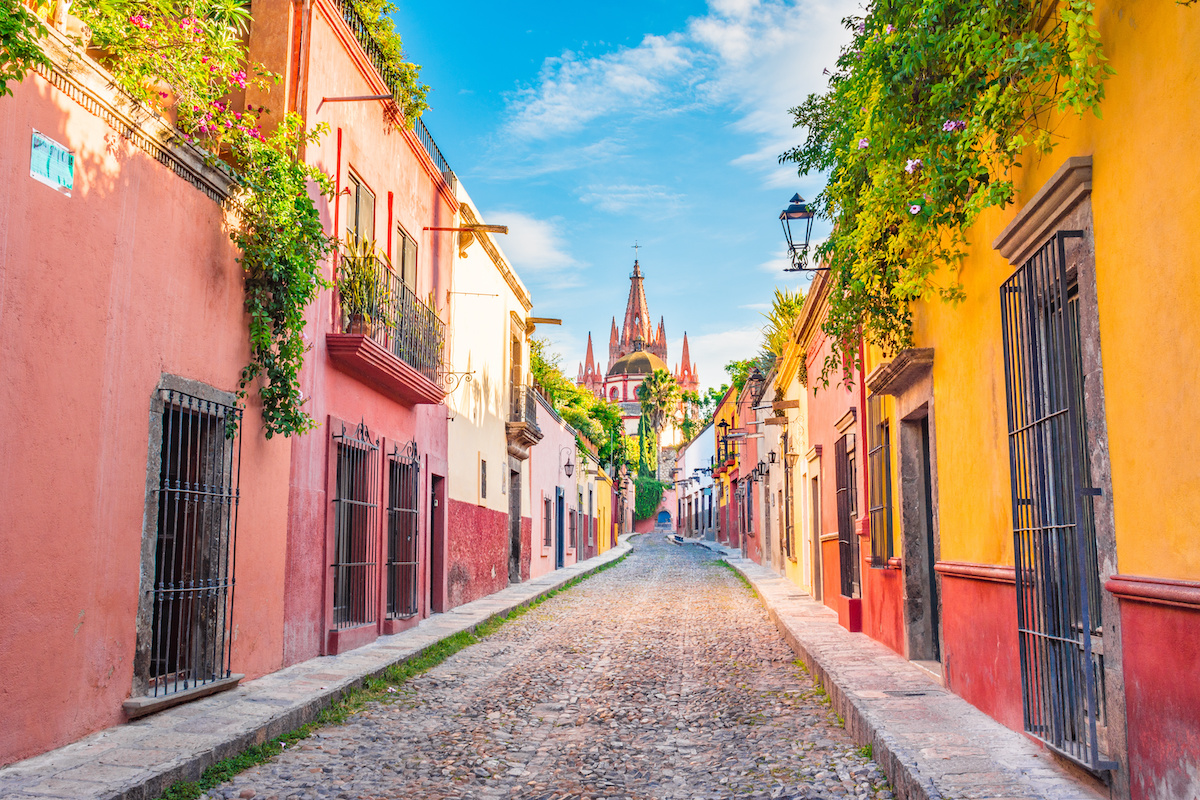 Just outside of Tulum is Cenote Dos Ojos, also known as the ‘cavern of two eyes’. This is one of the country’s largest underwater cave systems. Its name refers to the two sinkholes connected by a long passageway within it.

The water in the caverns is filtered through limestone, making it crystal clear. As a result, Cenote Dos Ojos is a popular tourist attraction in Mexico among snorkelers and serious scuba divers. 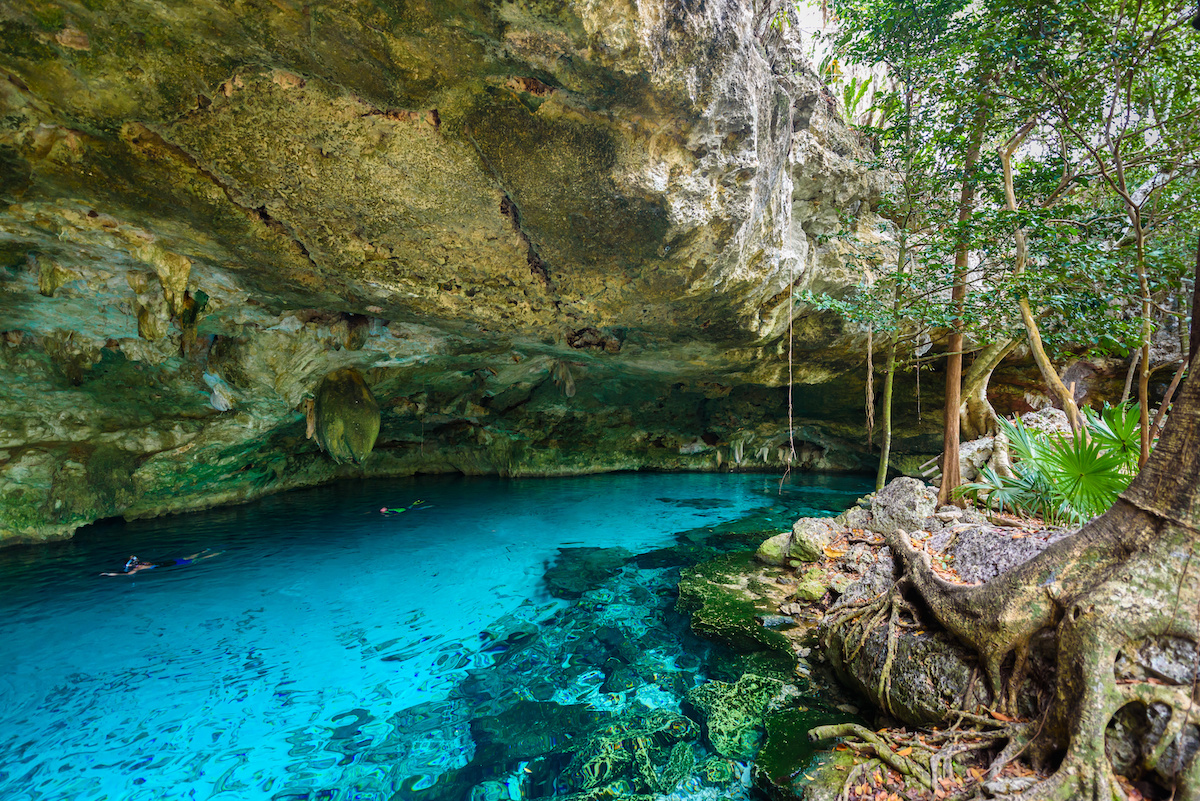 In the city of Taxco is the majestic Baroque El Templo de Santa Prisca, or otherwise known as Santa Prisca Church. Built in the 18th century, the church is a colonial landmark of Mexico that was commissioned by a prosperous Spanish mine owner.

Made from pink stone, boasting exceptionally colossal twin towers, and decorated with tiles. This is an ornate monument that no architecture enthusiast or historian would want to miss. The interior holds nine enormous altarpieces that stretch from the floor to the ceiling, and each is wrapped in gold. 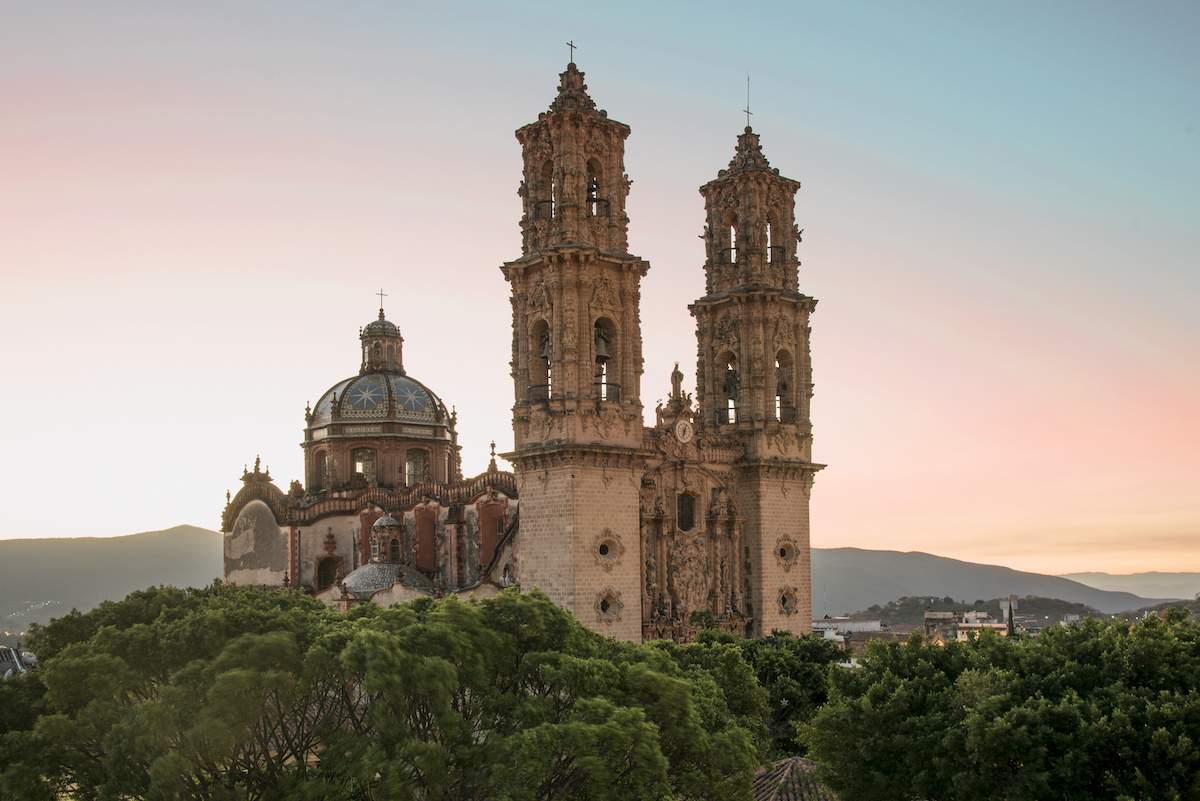 Just eight miles from Cancun is Isla Mujeres. The island is surrounded by the blue waters of the Caribbean Sea and not only is it a top tourist attraction in Mexico, but it’s also a place with significant cultural heritage.

Isla Mujeres, which loosely translates to the island of women, was sacred to the Mayan goddess of childbirth. Today, visitors arrive by ferry from Cancun to relax on the scenic beaches, visit the local turtle farm, scuba dive, and just escape the crowds of the neighboring city. 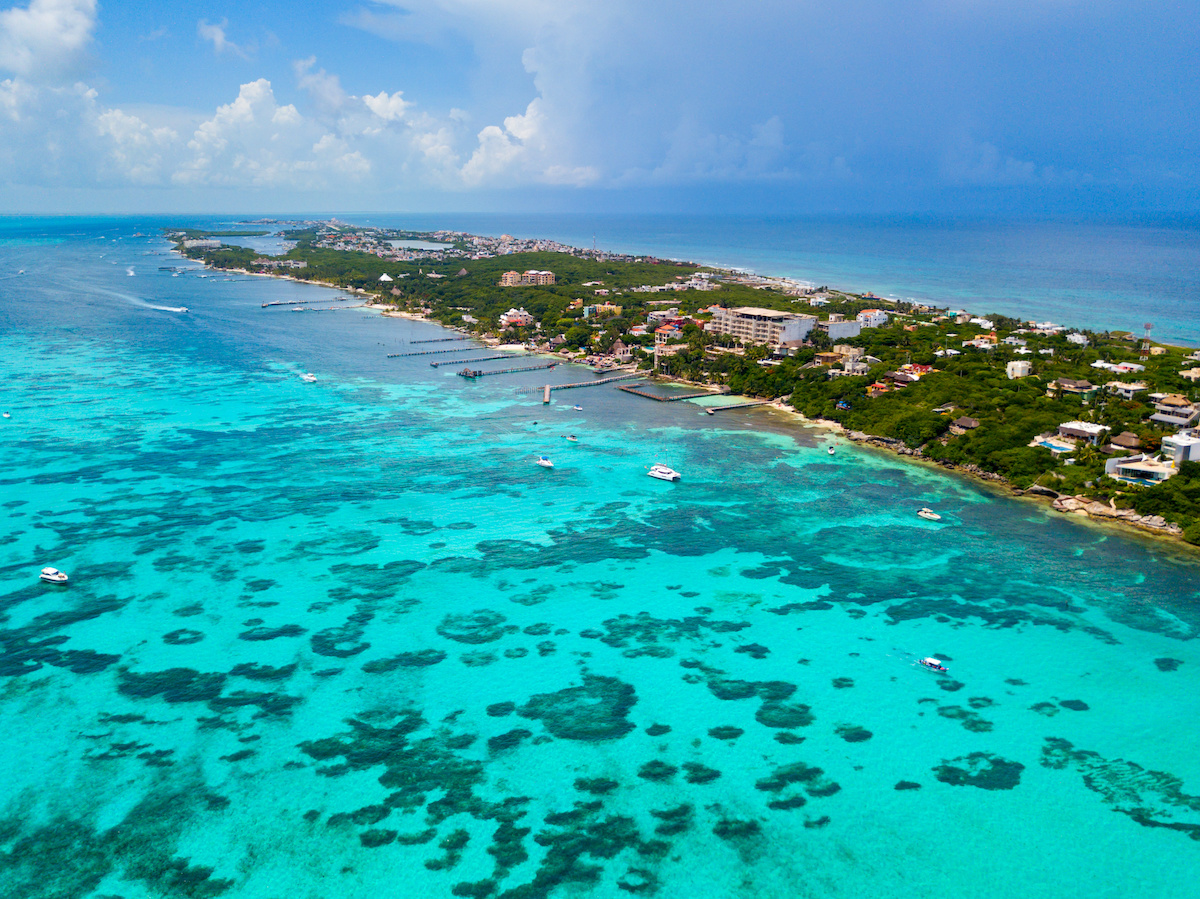 Monte Alban is a series of ruins dating back to 500 BC. It’s where Mexico’s indigenous  Zapotec people lived, worked, and worshipped on the hillside. It was then inhabited by the tribe people for over 1500 years. The Zapotec people had built canals, pyramids, and terraces on the hills.

The site is situated on high ground to form a defense against attacking tribes. Because of this location, Monte Alban has incredible views over the surrounding landscapes. 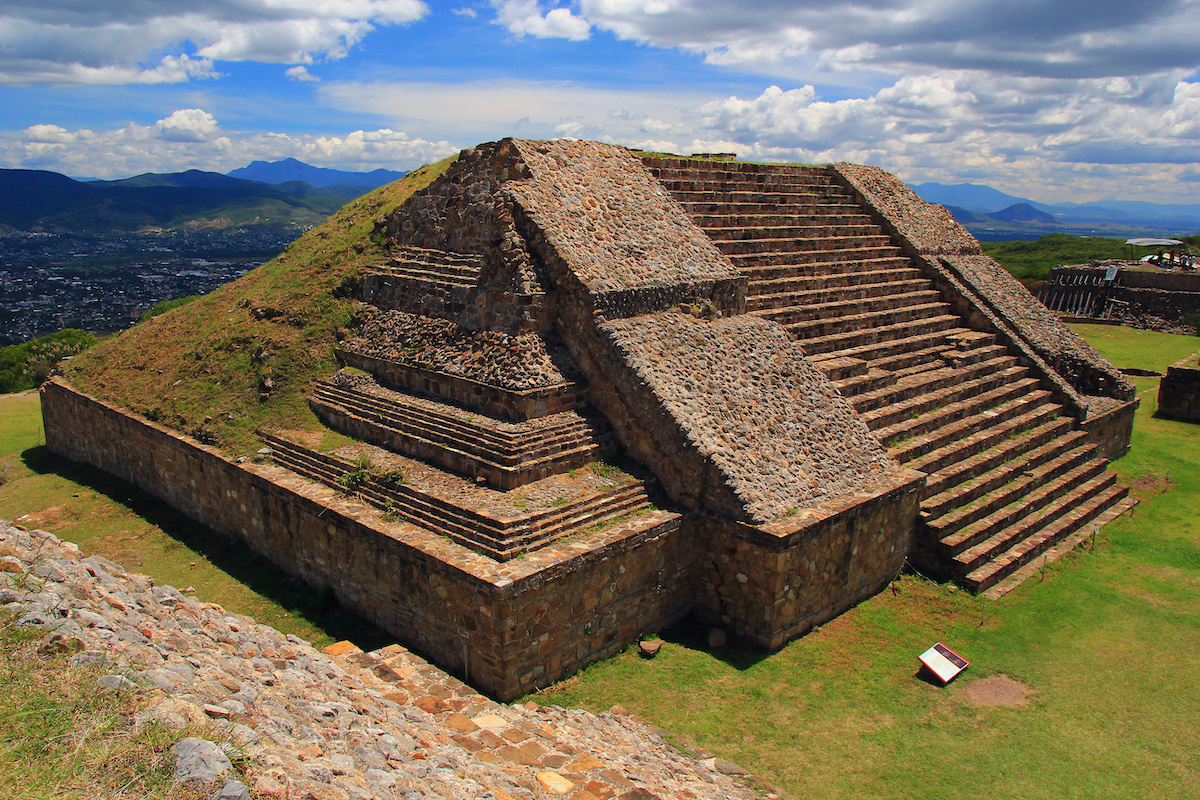 The ancient Mayan city of Uxmal is one of the most historically and culturally significant sites to see in Mexico. Uxmal was built in the 9th century and the various stone levels and elaborate stonework give the pyramid structures within the city a grandiose feel. One of the Uxmal’s pyramids known as ‘The Magician’s Pyramid’ is the tallest one. 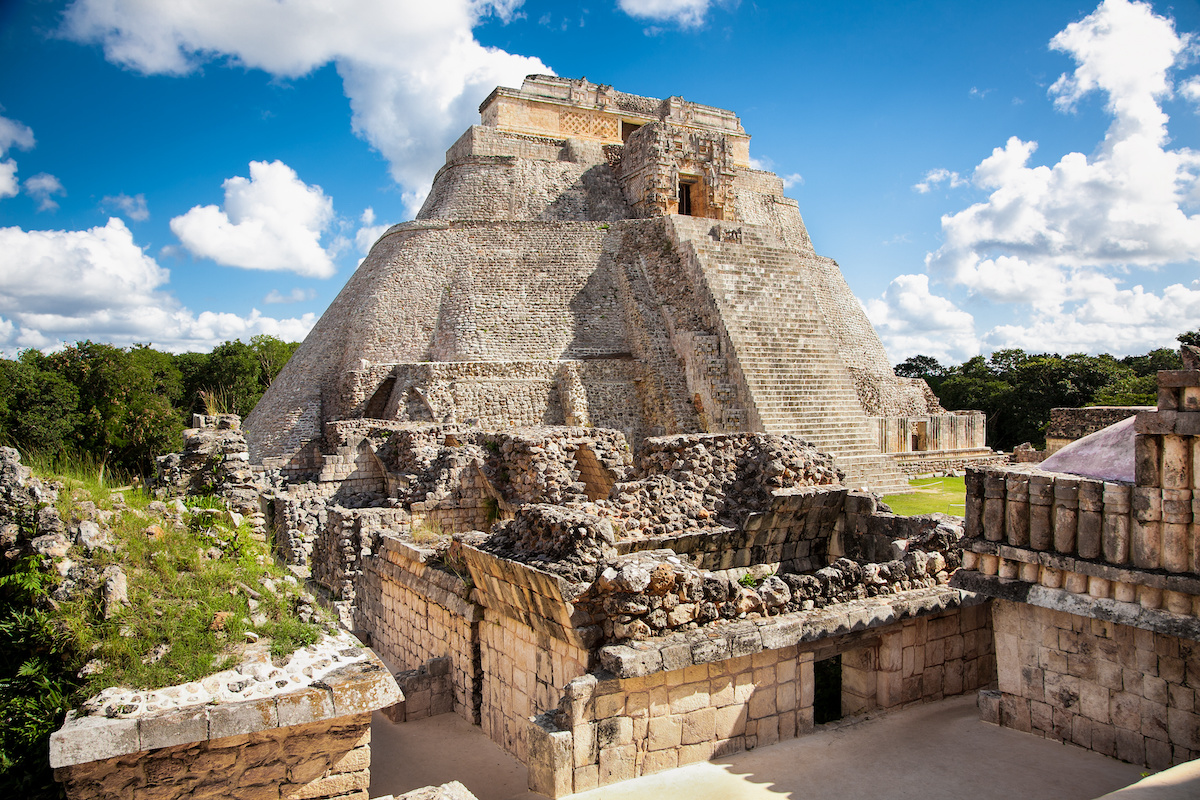 San Miguel de Allende is a small colonial town in the Bajio mountains of Central Mexico.

Although this is not a landmark, this city’s history is inspiring. Founded by a San Franciscan monk who would later play a pivotal part in the town’s independence from Spain.

Today, San Miguel de Allende is best known for its colonial architecture and European-influenced cobblestone streets. Historic buildings like the pink Teatro Angela Peralta and the Santuario de Atotonilco are enormous church complexes that are among the top attractions in Mexico. 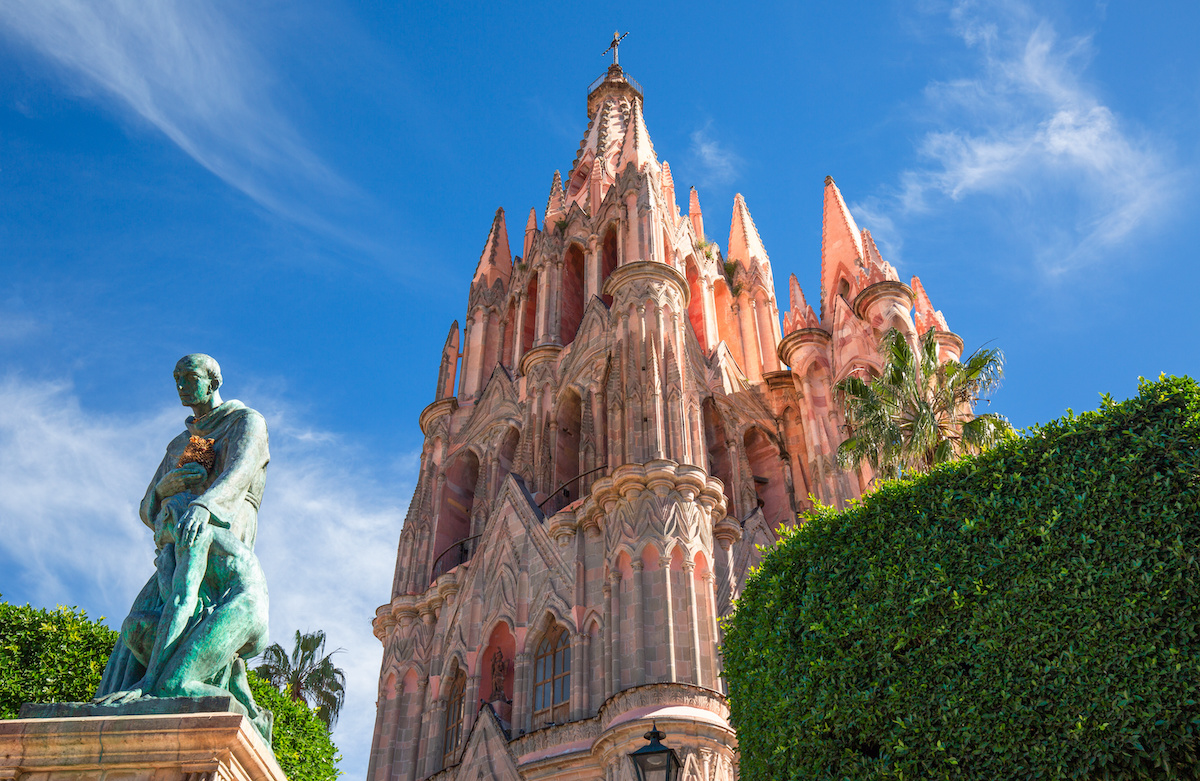 The boardwalk in Puerto Vallarta known as El Malecon borders the seaside promenade. Statues line the walkway as well as countless local establishments that cater to visitors. Most of El Malecon is exclusively for pedestrians, making it a great spot to admire the view.

Along El Malecon, you can stop to shop handmade souvenirs by the locals, sample some fresh seafood, or simply enjoy a few tropical drinks at a local bar. 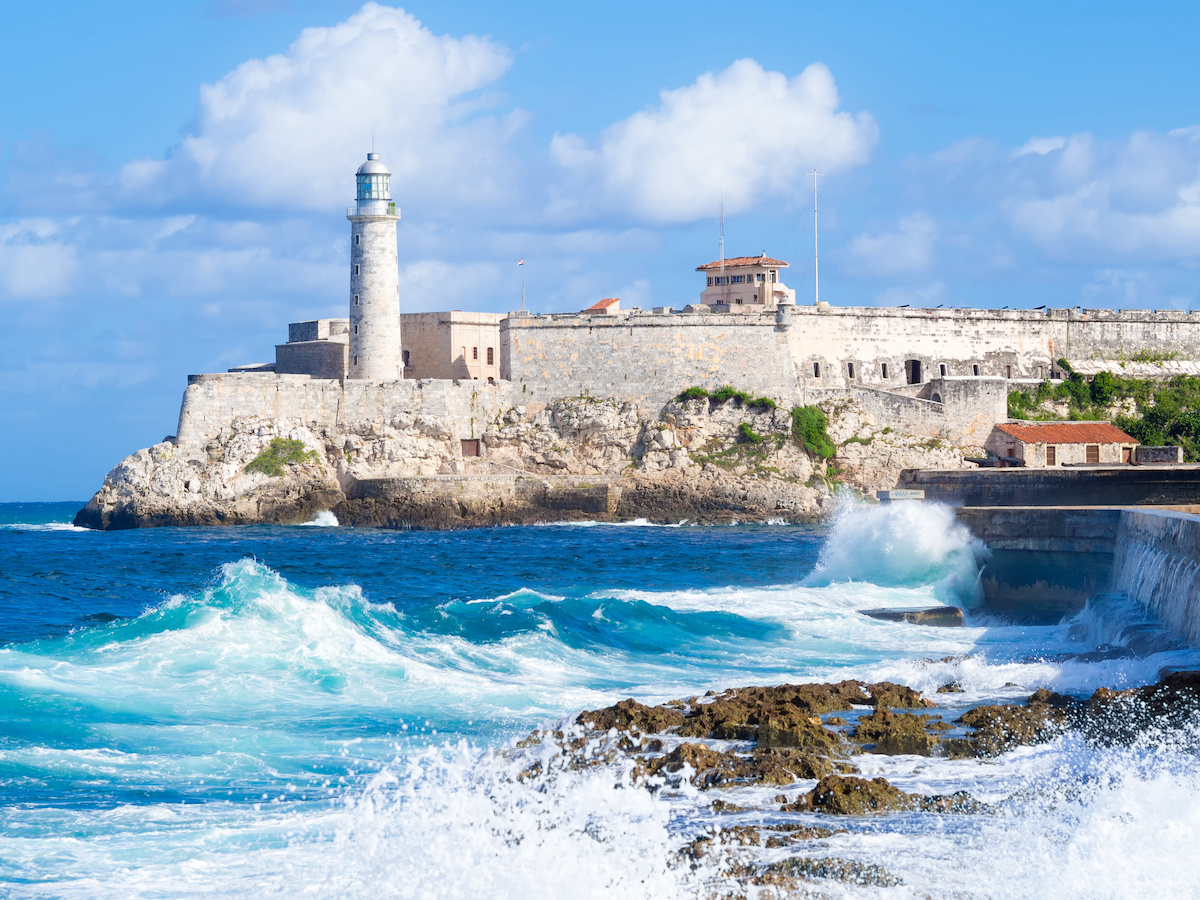 The site of Arqueologica Teotihuacan (ancient ruins), is located northeast of Mexico City. It is believed to have been built during the year 100 BC. One of the most symbolic and worshipped parts of this Mexican landmark is the Temple of Quetzalcoatl and the Pyramids of the Sun and Moon.

Unfortunately, there aren’t a lot of historical recordings of the Teotihuacan people, but it’s evident that they built plazas, temples, and pyramids. Your Mexico sightseeing itinerary would be incomplete without visiting this famous Mexican landmark. 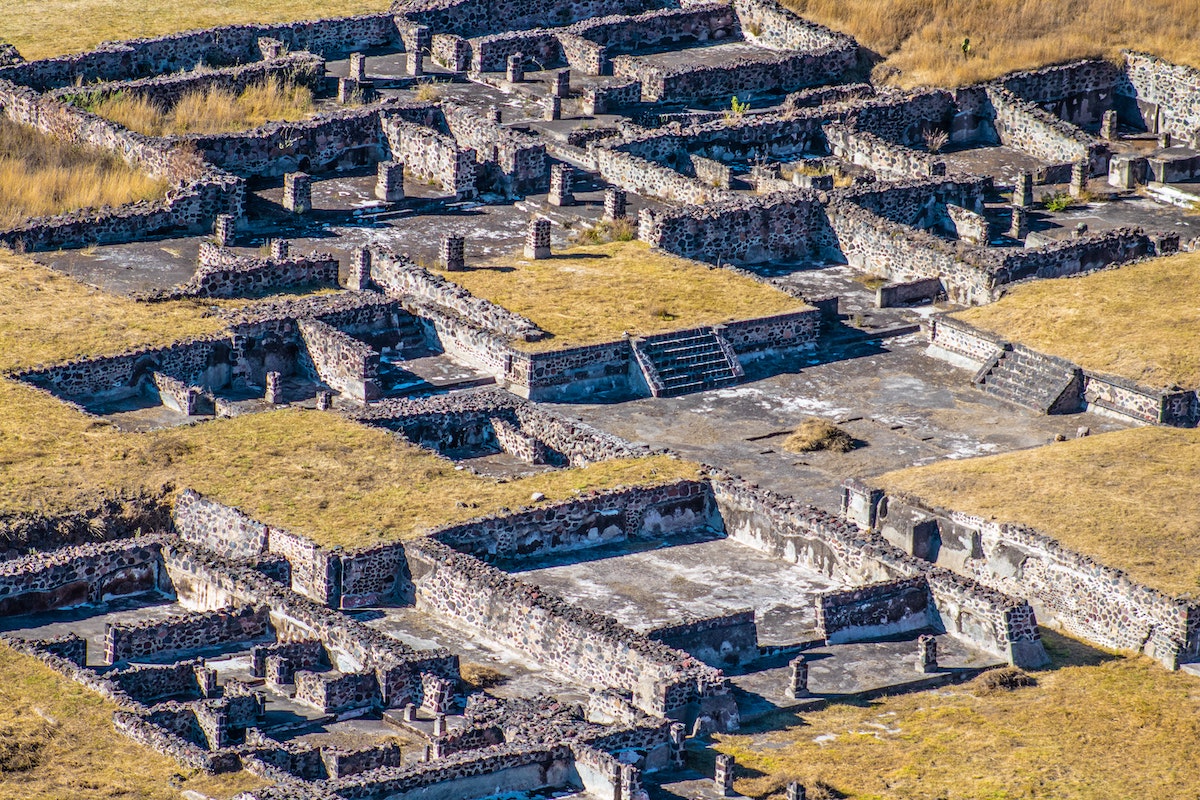 Located in the state of Oaxaca is the most important religious center for the ancient Zapotec culture known as Mitla. Milta is a fascinating ancient ruin that is famous for its elaborate mosaic design that adorns the facades of the buildings and tombs. The village of Mitla is composed mainly of thatched huts and houses situated on the hillside below the ruins. 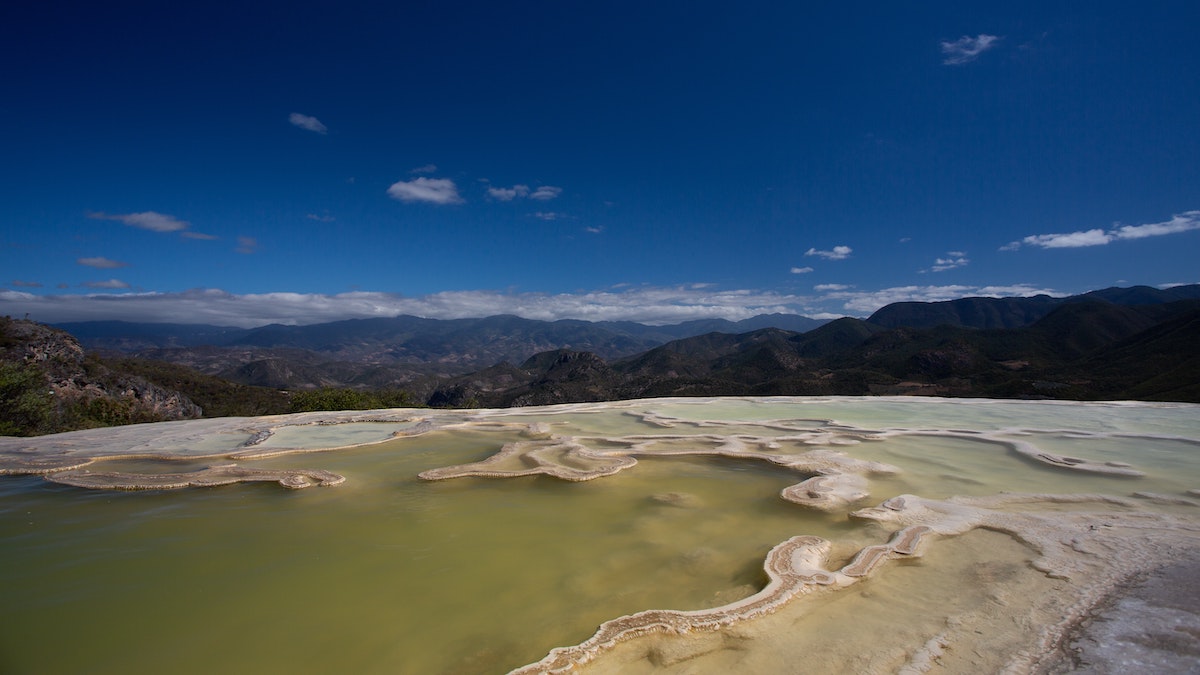 This stunning temple was considered the most important building in Aztec culture. Templo Mayor was built to have several layers and it stands at 197 feet (60 meters) tall.

It was once the religious and social heart of the Aztec empire. In 1987, the temple was honored as a UNESCO World Heritage Site.

Bonampak is an ancient archeological site in the state of Chiapas. While there are many Mayan structures at Bonampak worth exploring, the most famous is the Temple of Murals.

The Bonampak Murals are a collection of ancient art within the temple that beautifully illustrate the history and culture of the Mayans. Hundreds of figures have been painted in three different rooms of the temple, each of which tells a part of a narrative in bold turquoise, red, and yellow hues.

The Castillo de Chapultepec was built in 1785 and has been used for various purposes since its construction. Located on top of Chapultepec Hill within Mexico City, the castle was once a vacation home, a military academy, and a presidential home. Today, it’s a fascinating National Museum.

Visitors can ogle at the various mural paintings, colorful corridors, and gold embellishments. The outdoor area of the castle has a unique checkerboard pavement and beautifully carved statues. Castillo de Chapultepec is often called the only real castle in North America. 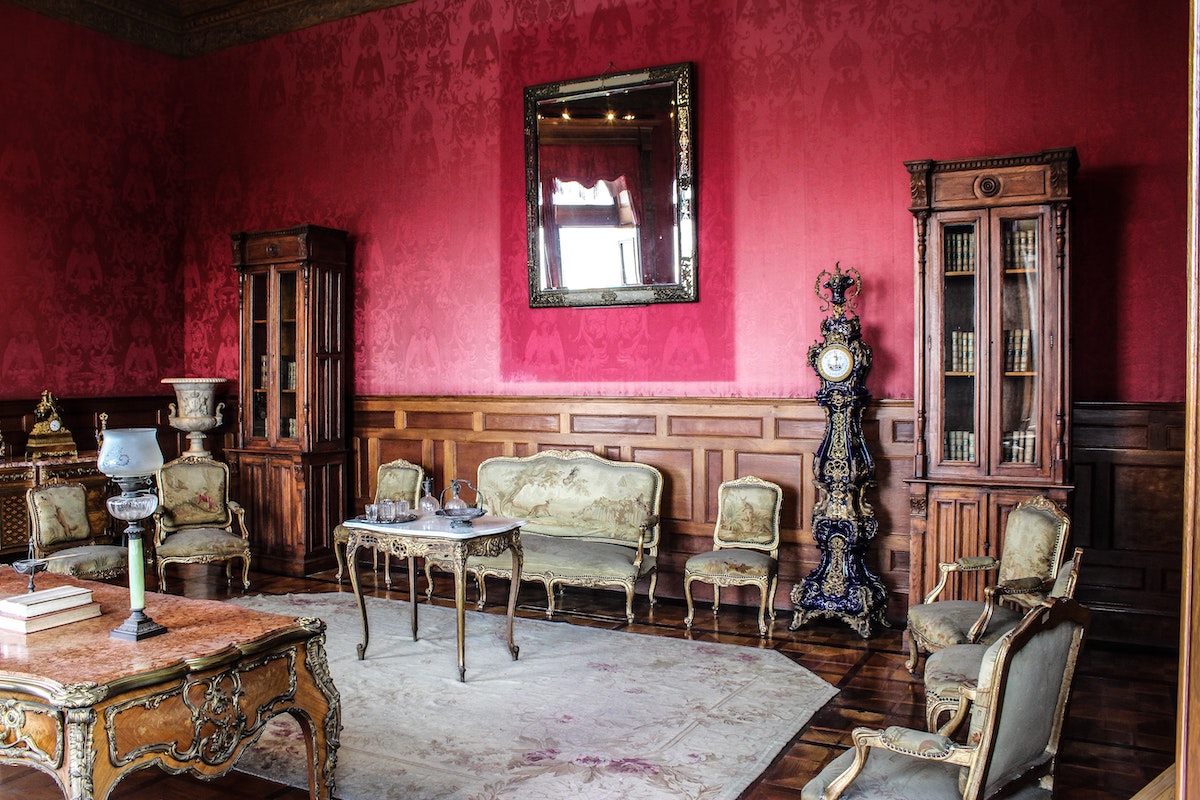