Crumbling temples and turquoise tranquil coves are just a few of the many famous landmarks in Greece. This article is here to list some of the best Greek monuments and tourist hot spots to help you plan the ideal vacation around Greece and its numerous islands.

From the capital city of Athens to the 2,000 islands dotted along the coastline, Greece is a country steeped in rich cultural history and mystique. According to some religious legends, the country was built with the leftover stones after God poured soil through a sieve.

Regardless of what you believe, these Greek landmarks provide an ethereal experience to behold. It’s impossible to experience these ancient Greek monuments without feeling the same reverence for the celestial that inspired their creation all those years ago.

Gazing at the white sands and cobalt blue waters, how could one disagree that Aphrodite once rose from these waves?

After catching a taste of Roman architecture in the not-too-distant Italy, continue your travels through Southern Europe with these famous landmarks in Greece.

Kicking off in the Capital City of Athens, why not pay a visit to this iconic marble temple. Dedicated to the Greek Goddess Athena, the Parthenon is one of the most popular of all Greece landmarks. Although battered by centuries of wars, looting, and natural disasters, the temple still stands to this day. The Parthenon is a regal symbol of ancient Greece and an ode to Athenian culture.

The Parthenon can be found atop the limestone plateau in the Acropolis citadel. The citadel itself sits at a rocky outcrop above the city of Athens and houses the remains of several ancient Greek buildings with the Parthenon being the star of the show.

Visitors will also want to pay a visit to the famed Acropolis Museum. This grand building is home to more than 3000 preserved Athenian artifacts. The ongoing narration in the interior will fill visitors in on the extensive history of Greece dating all the way back to prehistoric times. Lovers of art and archeology alike froth for a chance to explore this establishment.

There are few days per year where entrance to the Acropolis is free. These days are March 6, April 18, May 18, October 28, as well as the last weekend of September and every Sunday from November to March.

However, entry tickets are reasonably priced and an affordable endeavor for even the tightest of budget vacations. Summer is the peak tourist season so those looking for lower prices should head to this ancient Greece monument during winter instead. This is also a good idea if you’re looking to avoid long queues.

Visitors will have the option to book combination tickets which includes access to the Acropolis and the Parthenon as well as several other archeological sites. These exclusive tickets allow tourists to skip the lines at these attractions and are valid for five days.

Leisurely take your time examining a different ancient Greek monument per day or spend two excitement-filled days jumping from site to site. The choice is yours! 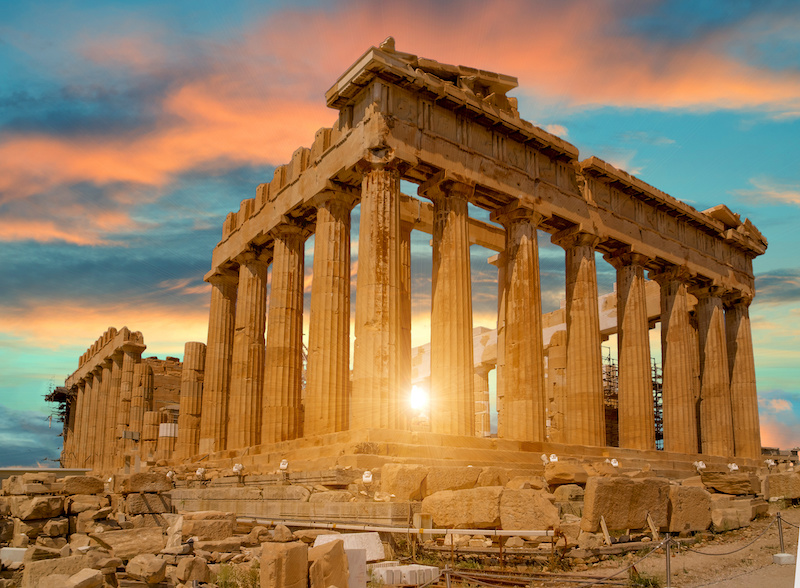 Now that you’ve seen some tremendous man-made pillars, head on over to the natural sandstone pillars of Meteora. The name itself means “suspended in the air” and it’s more than fitting. Decades of wind and water have carved massive pillars in the sandstone area, creating towering structures – some of which are hundreds of meters high. Atop these astounding feats of nature sits six monasteries.

Built after the Ottoman conquest of 1453 by monks fleeing persecution, these tranquil Greek attractions sit at the very top of the Meteora pillars. Climb the precarious steps carved into the burnt umber rock and admire the sprawling views from the top.

Great Meteora is the most popular among tourists, being both the largest and highest of the monasteries. The other buildings perched on relatively smaller rocks make for some great places to snap photographs.

There are a few things to keep in mind when planning a visit to these whimsical, famous Greek buildings. Every monastery operates on slightly different open hours so it’s best to plan ahead if wanting to manage all six in one day.

It’s also important to keep in mind the required attire when visiting. The monasteries are a holy place and visitors are expected to wear long skirts (women) and long pants (men). 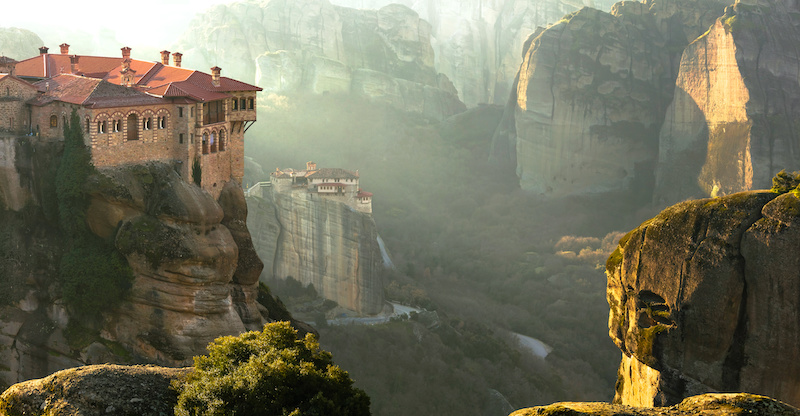 Even if you have no wish to set foot on this magnificent mountain range, there are still ways to witness this magnum opus up close. The Athens-Thessaloníki Highway cuts right between Mount Olympus and the dazzling Aegean Sea. Passing motorists are given multiple chances to stop and marvel at the snowy peaks.

Only 12.5 miles from end to end, the Olympus Mountain Range was only scaled by man after 1913. According to Greek legend, the highest point – Mount Olympus, was where the twelve Greek Gods defeated the wild natural force of the Titans. Led by Zeus, the gods then introduced civilization to the world.

Reaching the home of the gods atop these snow-capped peaks is a fairly easy trek if you know what you’re doing. Climbers are recommended to book a night’s stay in one of the hotels perched along the route.

Local guides are also available to accommodate you on your mountainous adventure. Hiking during the holiday season can get a little crowded and the winter months can be quite dangerous for the inexperienced hiker.

The best time to visit this famous landmark in Greece is in June and September when the weather is fairly mild and the crowds have dispersed.

The iconic domes of the Santorini Church mirror the brilliant blue of both the sea and sky. Visitors are bound to have seen the famous traditional Cycladic architecture in postcards and travel magazines by the dozen. However, no suave photograph captures the beauty of these buildings better than seeing them with your own eyes.

Comprising the church of Agios Spyridonas and the church of Anastaseos, both buildings sit next to each other on the cliffs of Oia overlooking the ocean. With a backdrop of intrinsically Greek architecture in the hilltop Oia town, these Domes are some of the most famous buildings in Greece.

The domes themselves and the surrounding rooftops are off-limits to visitors. However, tourists are encouraged to walk the surrounding areas to snap some gorgeous shots of the buildings. The earlier the better!

Mornings on the island bring gorgeous hues to the whitewashed walls of the churches. May to October is peak tourist season. To avoid the crowds, it’s recommended to visit these monuments in Greece during winter on a midweek morning. Traipse the winding narrow lanes and spot the drooping bougainvillea that line the pathways.

There are also a number of other activities around the area to indulge in as you travel. Oia has a delectable Greek food scene and wine tastings as well as more gorgeous architecture and divine volcanic beach spots.

For some of the most captivating sunsets in Greece, head on over to the small islet of Palatia and the unfinished Apollo Temple. The mighty marble gate stands at the entrance to the Naxos Harbor and can be reached from the Naxos mainland via a small, paved footpath.

Myths and legends dictate that the Palatia Islet is where the Minoan princess, Ariadne, was abandoned by her lover Theseus after his slaying of the deadly Minotaur.

Construction of the would-be temple began all the way back in the 6th century BC but was abandoned soon after. The marble doorway stands amongst traces of the foundations.

While it may be a steep climb to the hill on which this Greek landmark stands, the sunset view through the marble window is entirely worth it. Forlorn but grandiose nonetheless, the Portara is a jewel among ancient Greek landmarks.

Naxos and its monuments are best visited in the summertime when the air is warmer and the skies are clear. There are a number of affordable tours and activities around Naxos that involve a stop at the Portara monument.

With both fascinating seascapes and delicious cuisine, a trip around Naxos is an unmissable experience and the marble doorway at sunset is the gorgeous main event. Be sure to bring your cameras for this one because the golden shots are to die for! 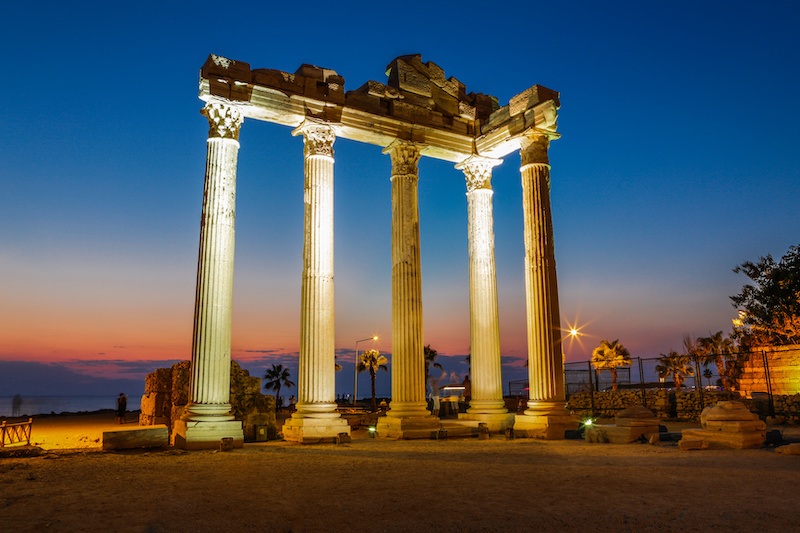 6) Ancient Theatre of the Asklepieion, Epidavros

A mere two hours from the capital city of Athens, the Asklepieion Theatre is the highland of many traveler’s trips around the Greek Isles. Of all the famous landmarks in Greece, this theater stays true to its roots with live performances and drama’s still taking place in the open-air theatre to this day.

The Asklepieion Theatre is well known for its impeccable acoustics. However, there’s more to the imposing limestone theater than just its ingenious architecture. Built to honor Asklepios, the god of healing and medicine, the Asklepieon is rich in history and cultural significance.

The performances and shows put on in the theatre were intended to pay tribute to the revered Healing God. And the connection between a god of medicine and the healing power of music is an obvious one.

It would be a travesty to visit this grand theatre without enjoying a live performance as well. Famous Greek performers and international actors have stalked the theatre stage since 1954.

During the summer weekends and over the Athens and Epidaurus Cultural Festival is the best time to catch a live performance here. Arriving early – most shows start at 1 pm – is a must in order to secure your seat without pushing through crowds. Additionally, most performances are very accommodating to foreign visitors and will even provide English subtitles. 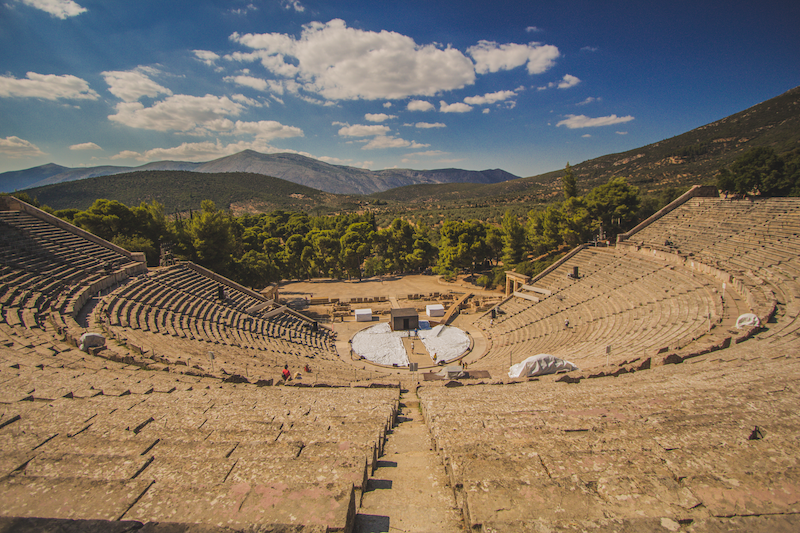 Frequently referred to as Greece’s very own Pompeii, Akrotiri is the remnants of an ancient buried city. Akrotiri is arguably the most mysterious of all historical sites in Greece. The original name of the enigmatic city is long since lost to time along with its former residents.

Much like Pompeii, Akrotiri was destroyed in a massive volcanic eruption that buried the city in molten lava and ash. In fact, the eruption of the Thera volcano was one of the largest volcanic eruptions ever recorded and sent a tsunami across the sea that reached as far as Egypt.

The explosion blew the center out of the island of Santorini and the city was wiped out. After the entire shape of the island had changed and the city lay buried beneath the ash, the island was abandoned for centuries. The real kicker to this historical event is that this city, with advanced technology for its time, was thriving over 4000 years before Pompeii was even founded.

Visitors are welcomed to explore these ancient ruins that still remain preserved as they were since 1500 BC. While a large chunk of the city has been uncovered so far, archaeologists are making new discoveries constantly.

It is believed, in fact, that it would take another century to uncover the lost city in its entirety. Today, the uncovered areas are protected under steel and wood buildings that are open to the public for visitations. Walk the wooden pathways and discover reconstructed houses of people who lived there thousands of years ago.

Access to the archeological site is fairly decent and visitors will have the option to purchase a combined ticket. This includes entrance to the Archaeological Museum, Museum of Prehistoric Thera & Collection of Icons, and Ecclesiastical Artefacts at Pyrgos. The site can be reached with a short bus trip from the main town on the island. 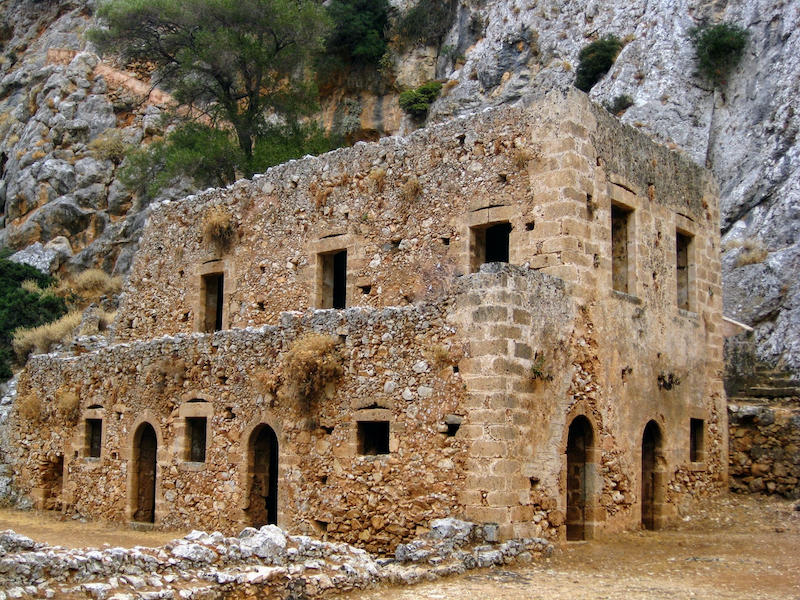 THANK YOU FOR READING THIS LIST OF MY FAVORITE FAMOUS PLACES IN GREECE!

SHARE THIS LIST OF FAMOUS GREEK LANDMARKS WITH YOUR FAMILY AND FRIENDS TO HELP THEM EXPLORE THESE GREECE ATTRACTIONS TOO!