Have you ever wondered what the most famous landmarks in China are? Well, China is renowned for more than just the kung-fu movies we all grew up idolising. This ancient country is endowed with some of the world’s most beautiful landmarks and monuments. The landmarks of China are some of the most astounding natural and historical sites in the world.

That’s why it’s no surprise that this is one of the most popular tourist destinations in the world. China captures and infuses its rich ancient history into everything it does. This exceptional feature is a tribute to why this country is an ever-growing space for tremendous attractions.

There are many interesting facts about China and there’s plenty to see and do whenever you’re here. However, with all the fantastic things to do here, you may be wondering where to start. In this article, we’re breaking down all the exciting and famous places in China. 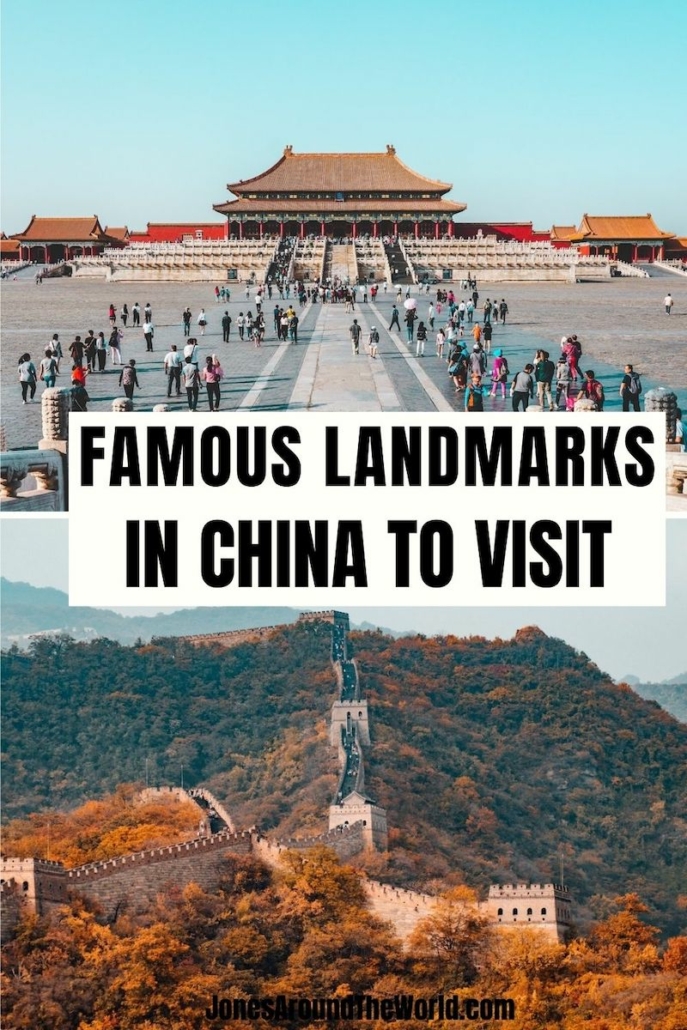 Famous Landmarks in China To VIsit

China’s vast landscapes have built the most exhilarating historical, modern, and natural landmarks across the country. There are the religious Buddhist landscapes that churn out natural forces to the prayer buildings that hear Heaven’s call. Then, there’s the adventurous Great Wall of China, and the adorable Giant Panda Base.

China is the one place where you’ll never run out of things to do. In fact, you might even complain that there are too many activities on your itinerary. If you’re ever in the mood to dive deep into the historical brilliance that China is renowned for, then plan your landmark-themed trip today.

Here are ten fascinating sites to see across China: 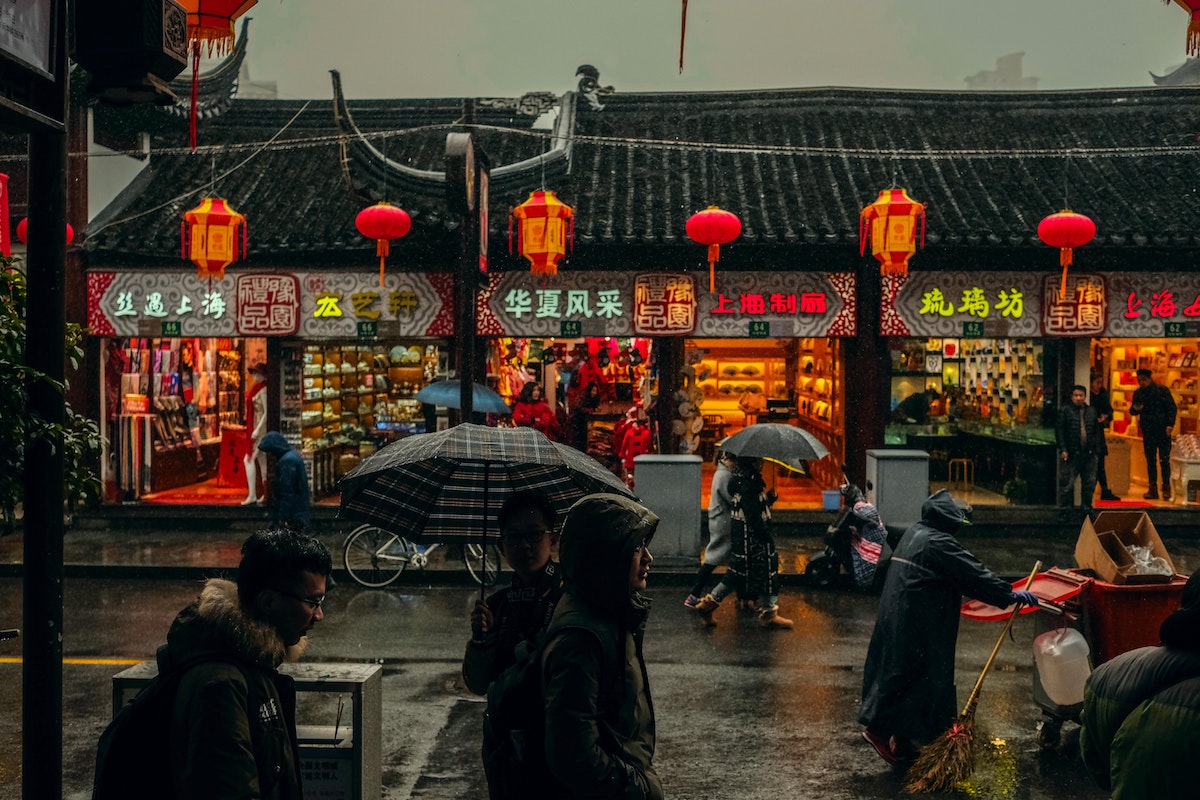 The Great Wall of China is easily one of China’s most famous landmarks. This historical site is naturally the go-to destination for any tourist seeking to learn more about the country’s rich historical background. 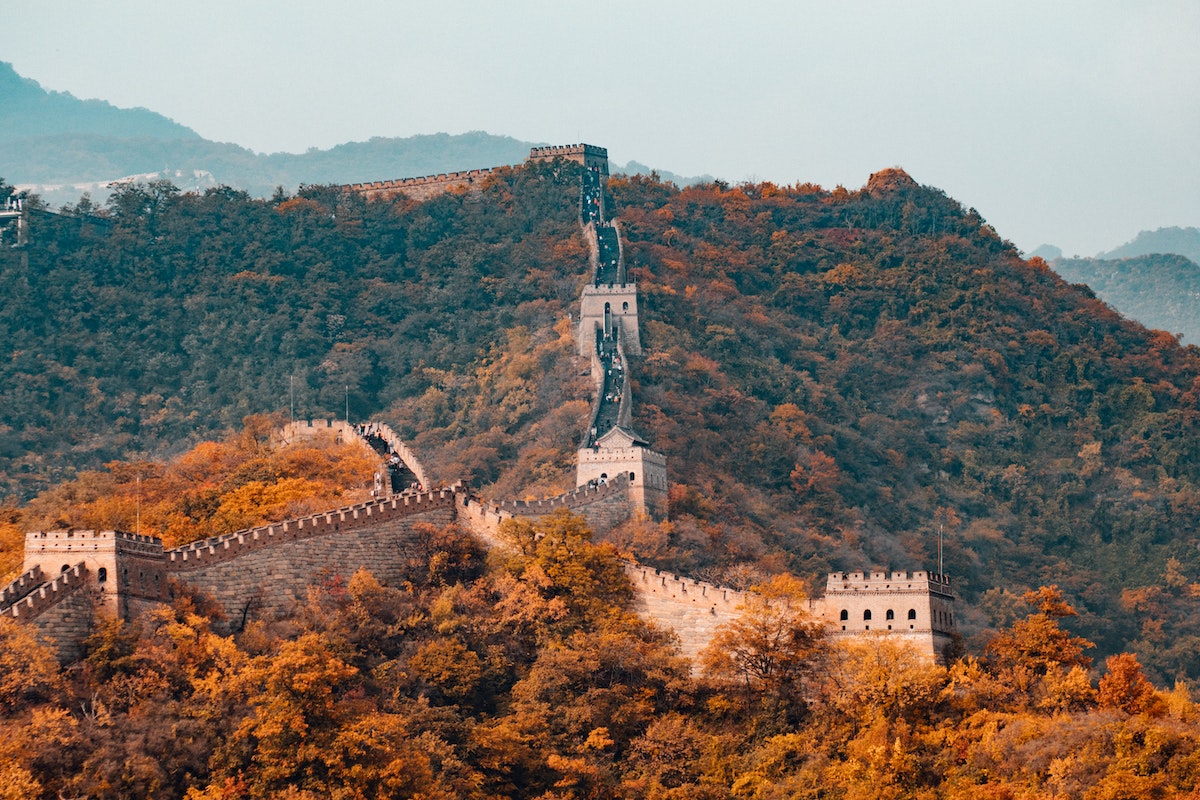 This spectacular site spans over 130 000 miles (21 000 kilometres) and offers you a time-travel experience of ancient China. The evidence of decay is left untouched as a tribute to the thousands of inhabitants who built this masterpiece. However, some of the walls have been restored and maintained to stabilise the structure.

The best way to experience this remarkable feature is by hiking the neverending trail and exposing yourself to the picturesque views and towers along the way. If you’re not quite up to the challenge, there’s a cable car tour to keep you energized throughout the trip.

There’s nothing more captivating than finding yourself at the root of ancient Chinese history. It’s no wonder that this astounding architecture has found its way into the New Seven Wonders of the World.

Secrets Of The Great Wall | Ancient China From Above | National Geographic

One famous landmark in China that you absolutely need to experience is the Dujiangyan Panda Base (also known as the Chengdu Research Base Of Giant Panda Breeding). This is where you get to experience one of the most beloved animals in the world, the Panda Bear, in its most natural habitat. 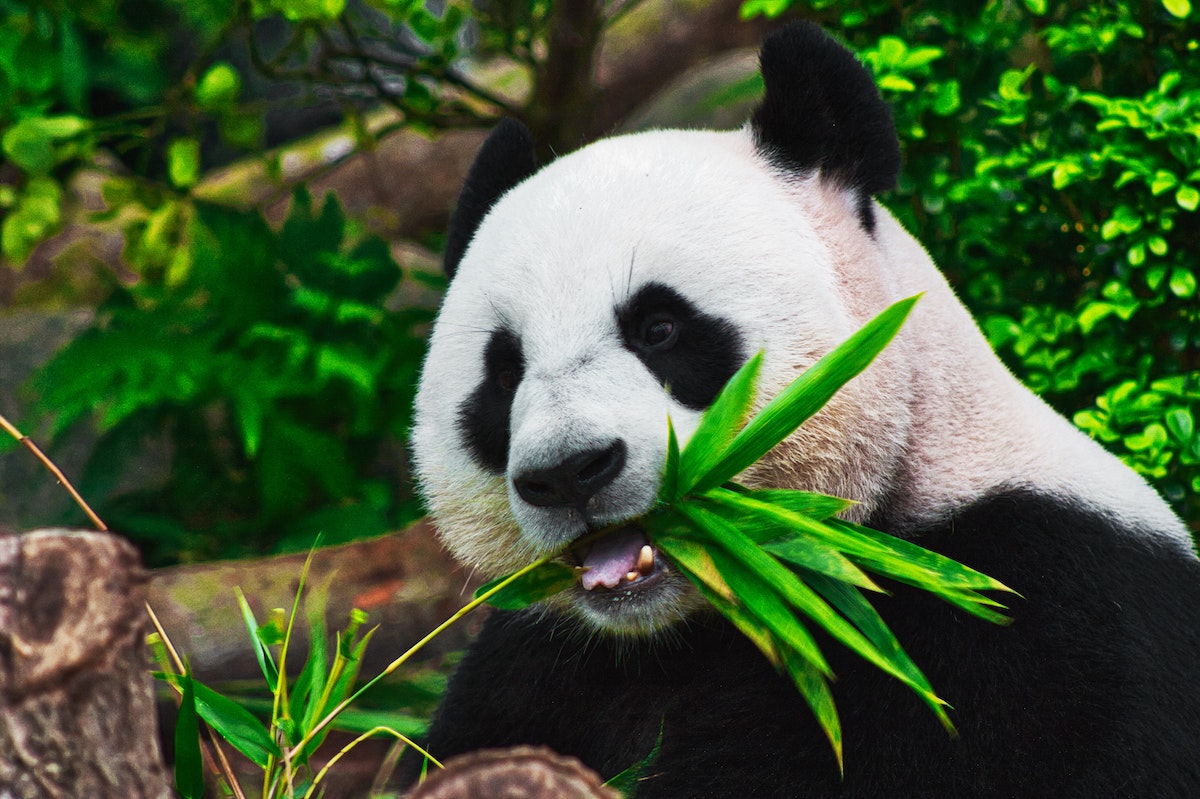 One thing about  Pandas is they love to eat, and the research base offers them plenty of bamboos to enjoy as they laze around after an active morning. They’re also adorable to look at, so take your time exploring their features and recounting all the fun facts you’ve learned about them so far.

The best times to visit the research base are from March to June and September to November. This is when you’re most likely to see baby pandas rolling about in the nursery. You’re probably going to spend quite a bit of time here, but don’t forget to also explore the rest of Chengdu’s hidden gems.

🐼 I’M A PANDA ZOOKEEPER FOR A DAY 🐼// PANDA VOLUNTEER DUJIANGYAN BASE// PANDAS IN CHENGDU, CHINA

The Leshan Giant Buddha is one of the most famous historical sites in China, mainly because of its iconic history of inception. This stone-carved statue ‘stands’ at  232-feet (71 meters) high and 78-feet (24 meters) wide, making it the biggest stone-carving in the world. 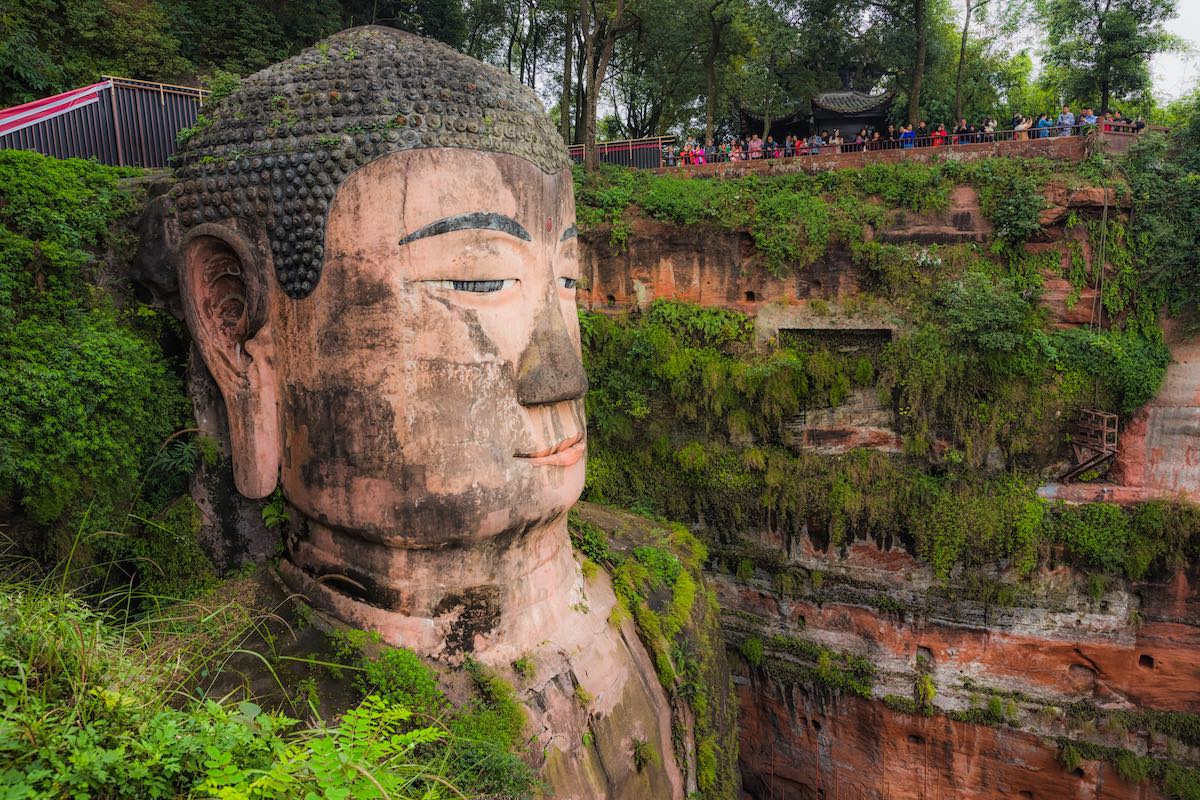 The idea of the Giant Buddha came from the inhabitants wanting protection from the water spirits that lurked around the three rivers that now surround Leshan Giant Buddha. These rivers are the Dadu and Min Rivers.

The most inspirational aspect of the Giant Buddha is how long it took the inhabitants to build it. It is said that the funding for the project took about 20 years to gather, and the actual build took a further 90 years to complete. This shows the dedication and faith that the people of Sichuan had in this national treasure.

The statue’s beauty is remarkable, but the story behind its build and the intricate details that were fathomed during its formation is truly what makes this statue a landmark feature.

The Mogao Caves, popularly known as the “Caves of the Thousand Buddhas”, hold the richest artifacts of Buddhist culture and descent. This site hosts an integrated system of temples and caves that served as living quarters, meditation chambers, and burial sites for ancient monks. 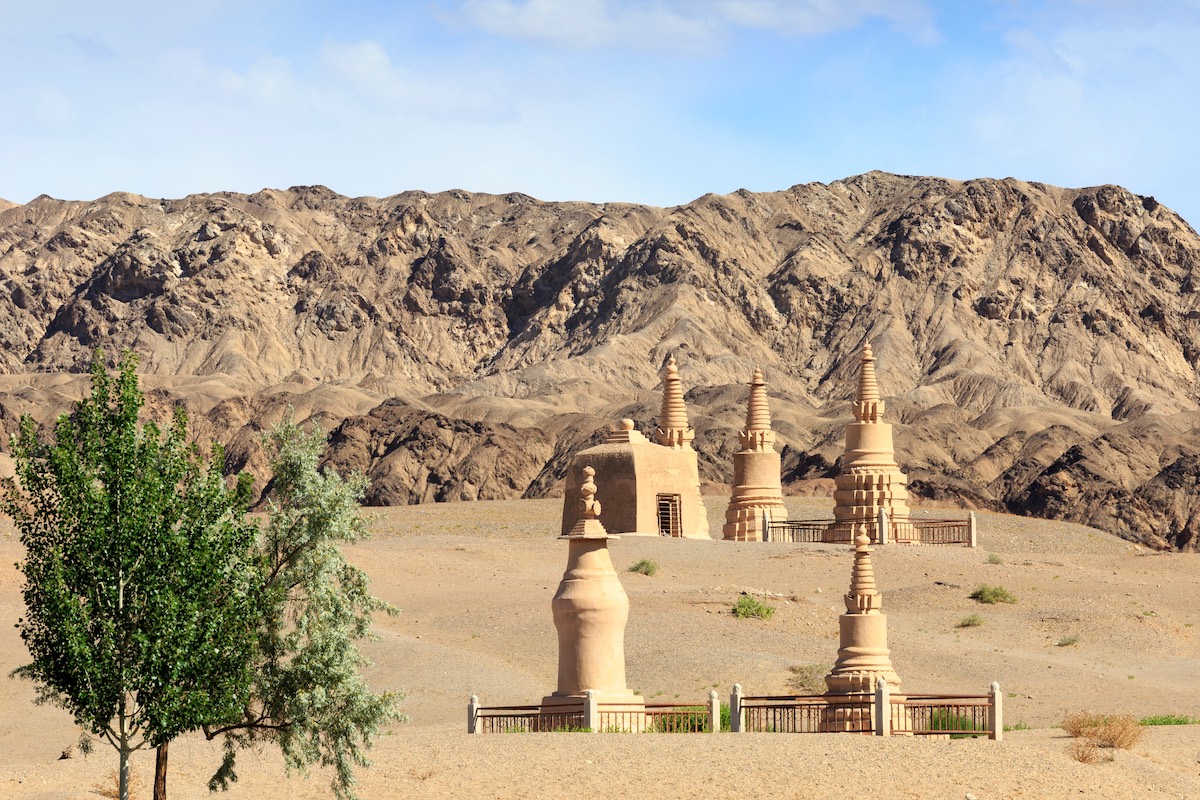 The Mogao caves are one of the peak icons of Buddhist culture and the rich religious background that China holds. The cave system has slowly come apart with the passing centuries as the system initially held over 1000 caves during its formation, but now only 735 remain.

There Mogao caves are a marvel to wander around and immerse yourself in. The abundance of Buddhist paintings and murals, sculptures, and intimate details of their livelihood makes this siting a notable landmark in China.

Mount Everest, also known as Mount Qomolangma, is the largest mountain range in the world. This talked-about attraction is considered one of the most important landmarks in China. 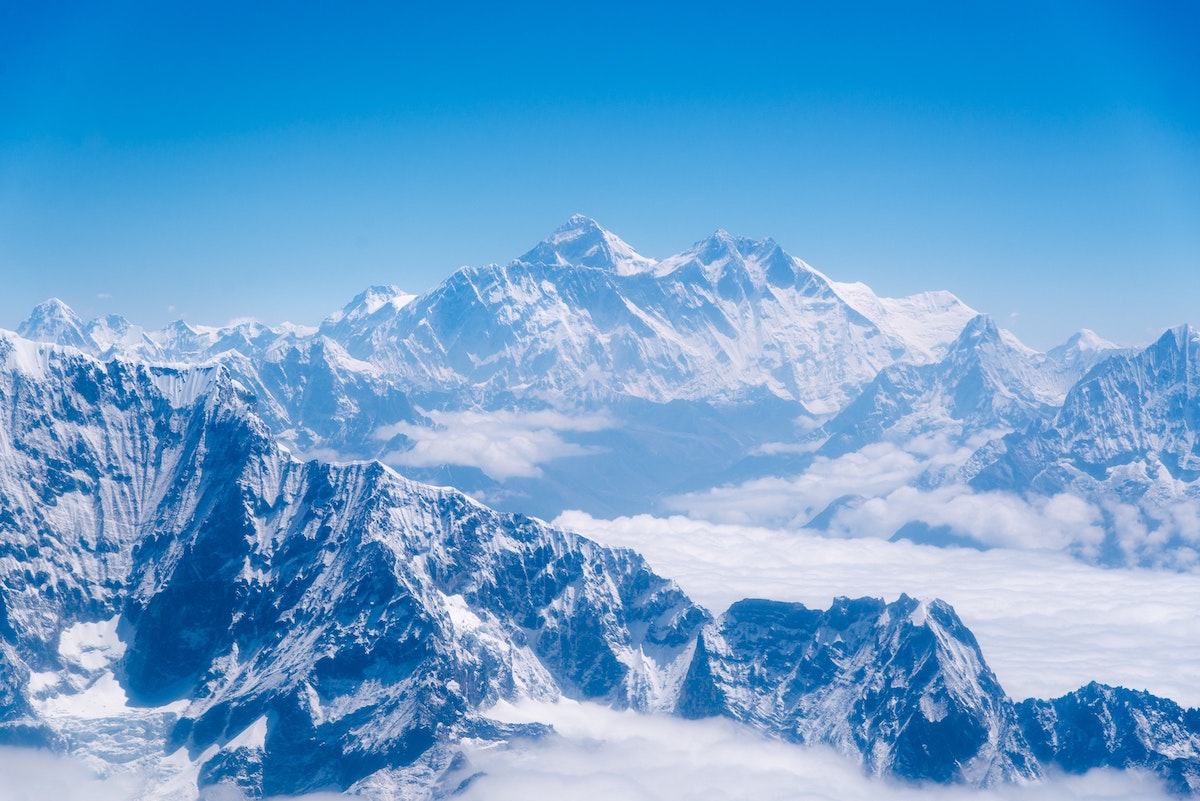 It’s a holistic space for the locals at the nearby Rongbuk Monastery and adventure enthusiasts’ dream accomplishment. This mountain is completely covered in snow, so if you’re a fellow mountaineer who enjoys soaring through blistering snowstorms, then this is for you.

There’s a great sense of pride and joy in making your way up this esteemed mountain range and gazing at the glorious views from below. Only a handful of people have successfully accomplished this complicated mission, so there’s plenty of room to add your name to the list.

The golden period for optimum weather peaks is from April to June, so make sure that these are your times to attempt your stake at claiming the title of successfully conquering Mount Everest.

Gazing at the wondrous landscapes of Tibet is one of the top things to do in China when you’re looking for a space to realign your soul and centre your spirit.

Everest - Getting to the Top | National Geographic 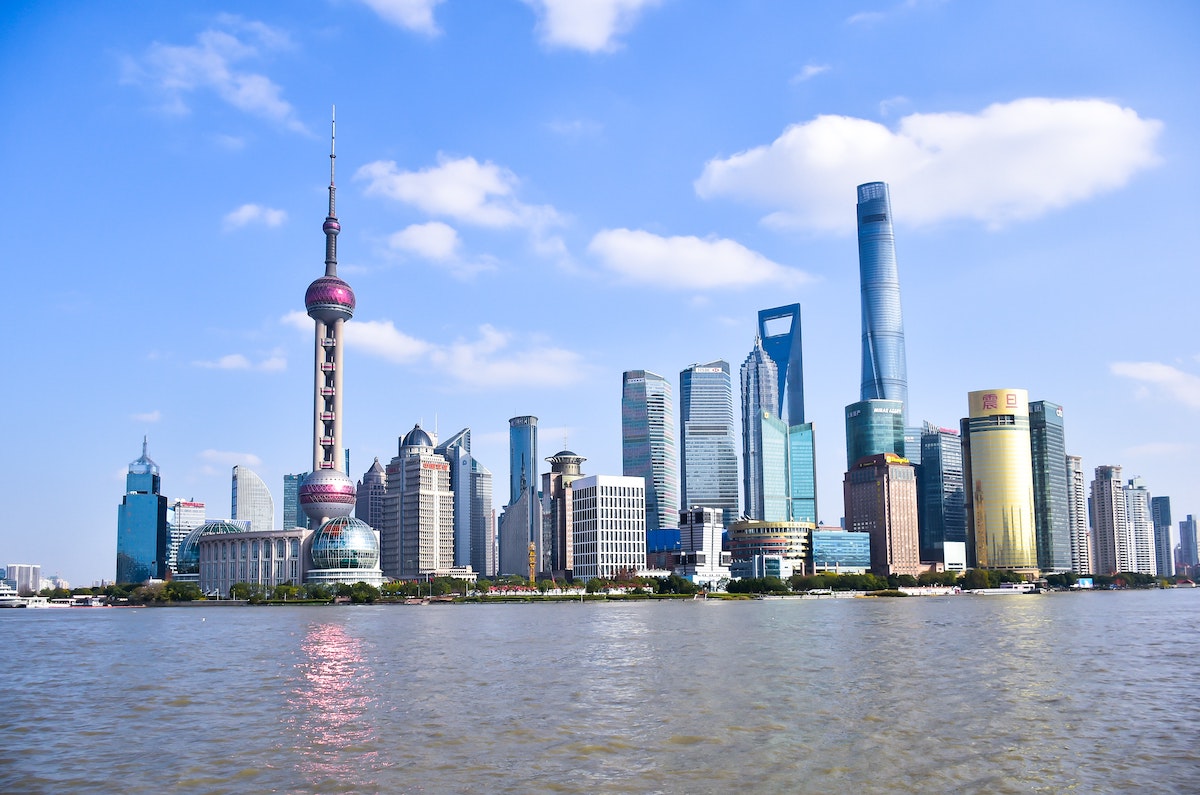 The Pearl Tower is one of Asia’s most visited tourist monuments and only falls second to the Eifel Tower in the world’s most famous tourist attractions. There are plenty of activities within the tower to keep you entertained on your tour.

There are three main observation decks that offer a stunning view of Shanghai from different angles. These full-scope sightseeing spheres are not for the faint-hearted, but they do offer a thrilling experience of semi-floating in the air while looking down below.

Here, you can find the Shanghai History Museum, a revolving restaurant, the Dynamic Ring Multimedia show, and a rollercoaster ride in the Game City. There are plenty of markets and vendors around, so you can get yourself some souvenirs or try out some local street food dishes.

The Qin Terracotta Warriors museum is considered one of China’s most preserved historical sites. These model-shaped warriors were created after the emperor’s death to accompany him into the afterlife. The warriors are each adorned with a unique facial feature and hairstyle to resemble the realistic warriors of that time. 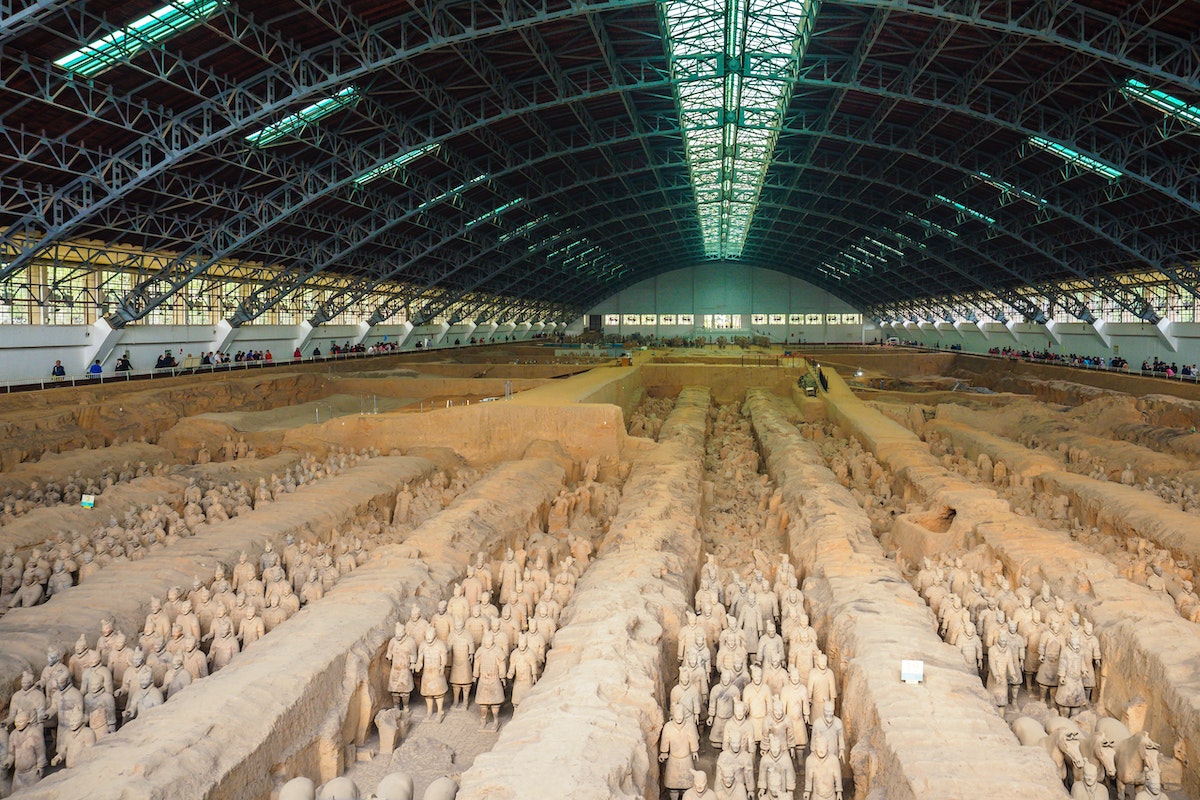 The Qin Terracotta army is considered a famous historical landmark, because of their accidental discovery by a local farmer about 40 years ago. Their ‘awakening’ from the deep, silent, 2000 year guard of Emperor Qin Shihuang’s mausoleum has also opened their tomb to various archaeological excavations. One of these public sitings also includes insight into the Emperor’s tomb.

The best way to experience these tombs is with an experienced tour guide who will take you on the journey of these multifaceted warriors. The Terracotta Warriors, just like in human form, serve many positions within the army. Here, you’ll find archers, foot soldiers, and some manning war chariots.

Whenever you find yourself in Disneyland Park, you’re sure to have an extraordinary time. This exclusive theme park has graced only a few places in the world, and now on the list is the city of Shanghai. 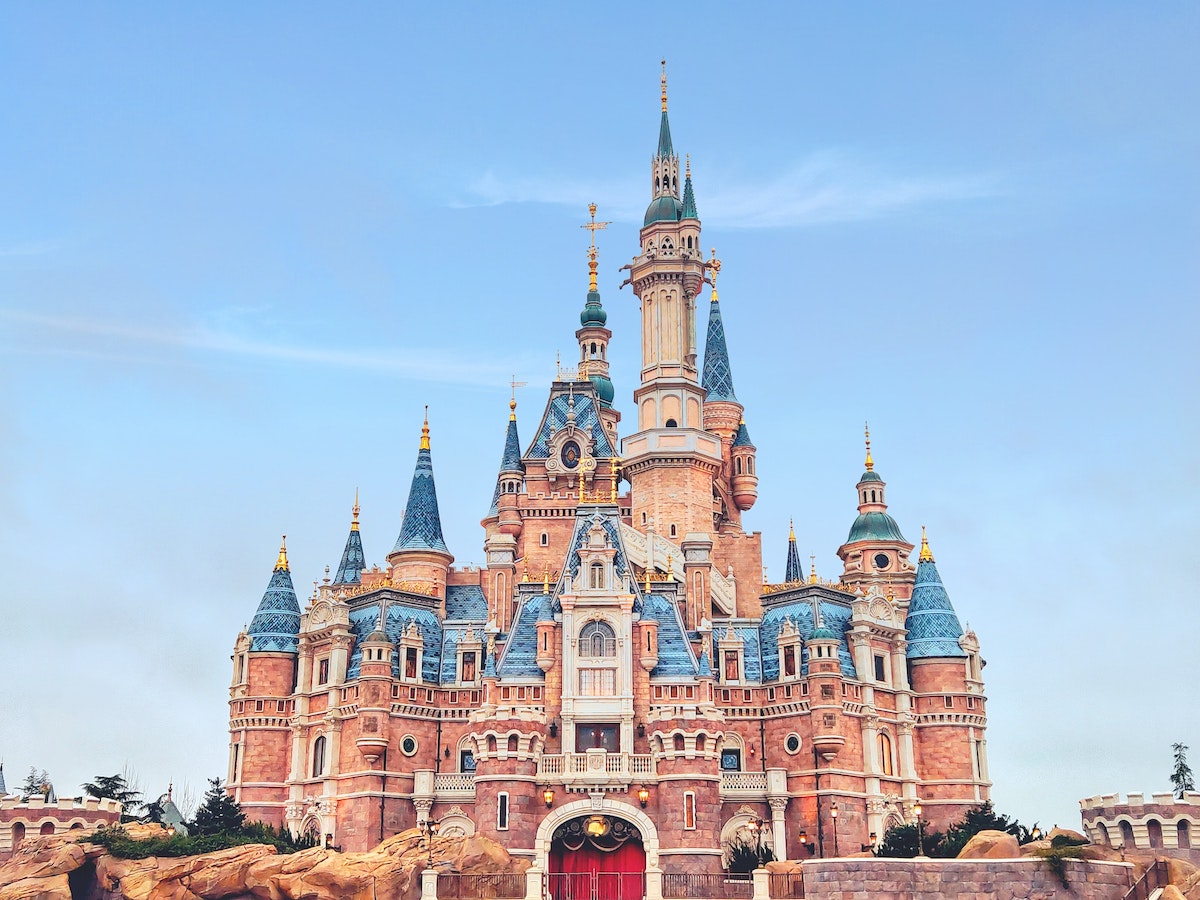 The Disneyland park in Shanghai has steadily become one of China’s famous places since its development in 2016. It’s endowed with all the magical places you’d expect from the theme park, like Mickey Avenue.

The Shanghai theme park also pays tribute to its Chinese roots by embedding a few of its own distinct details, like the zodiac Gardens of Imagination, that make it a unique landmark feature.

There’s nothing better than a family day out in Disneyland park, where you get to experience boat rides with Mickey Mouse and Donald Duck. There’s also the esteemed  Enchanted Storybook Castle that opens up into the land of all the Disneyland princesses.

The Shanghai Disneyland Park is an exceptional fusion of childhood Disney favorites and modern Chinese culture that excites all those who dare to explore it.

The Forbidden City, also known as the Imperial Palace Museum, offers an idyllic view of the capital city of Beijing. This famous Chinese monument stands as the largest imperial palace in the world and one of the world’s largest preserved ancient structures. 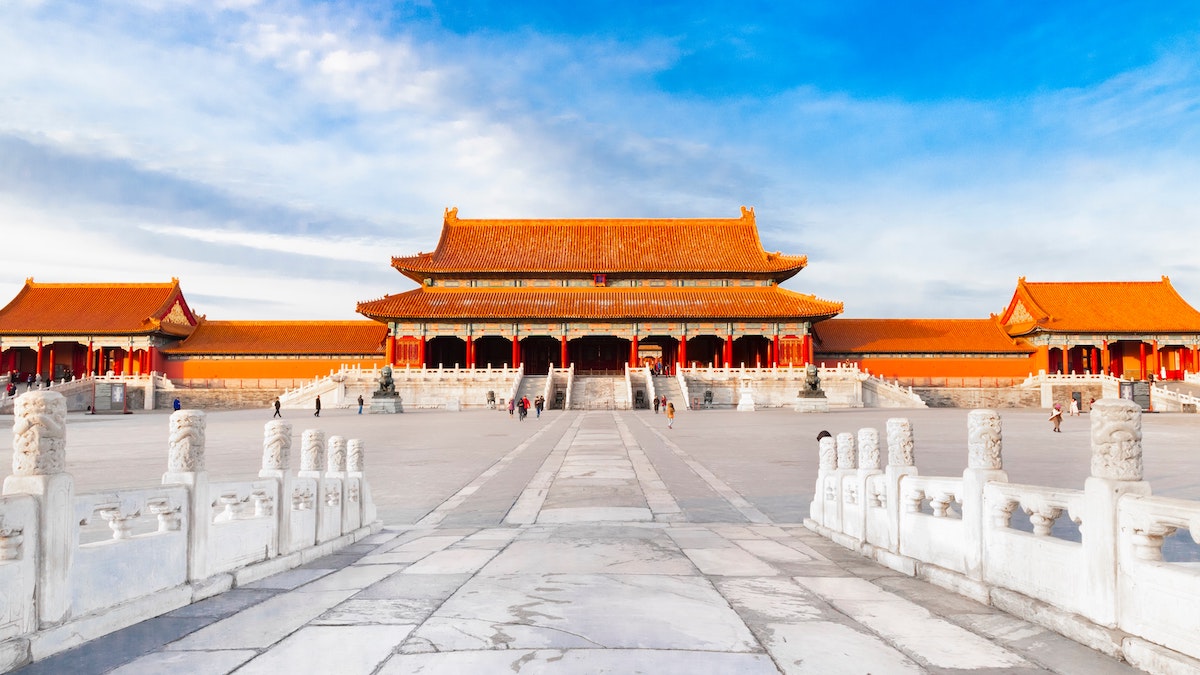 The Forbidden City was initially constructed as a palace to house emperors in the Ming and Qing dynasties and has housed at least 24 emperors to date. Like the Temple of Heaven, the palace was also built under strict Fungshui philosophies.

Today, this palace museum holds thousands of historical relics and ancient architectural accomplishments. There are also plenty of ancient historical tales and secrets hidden within these wooden buildings.

The best way to uncover the ancient secrets of the royals is through a guided tour among the selected places in the museum that offer insights into the eight famous figures that roamed the forbidden city. There are also audio guides, gift shops, and bookstores to review during your history lessons.

The Forbidden City: The Magnificent Imperial Palaces of Dynastic China

The Temple of Heaven is another exceptional monument that is attributed to the religious background of the Chinese. The site consists of three main historical temples: The Hall of Prayer of Good Harvests, The Imperial Vault of Heaven, and The Circular Mound Altar. 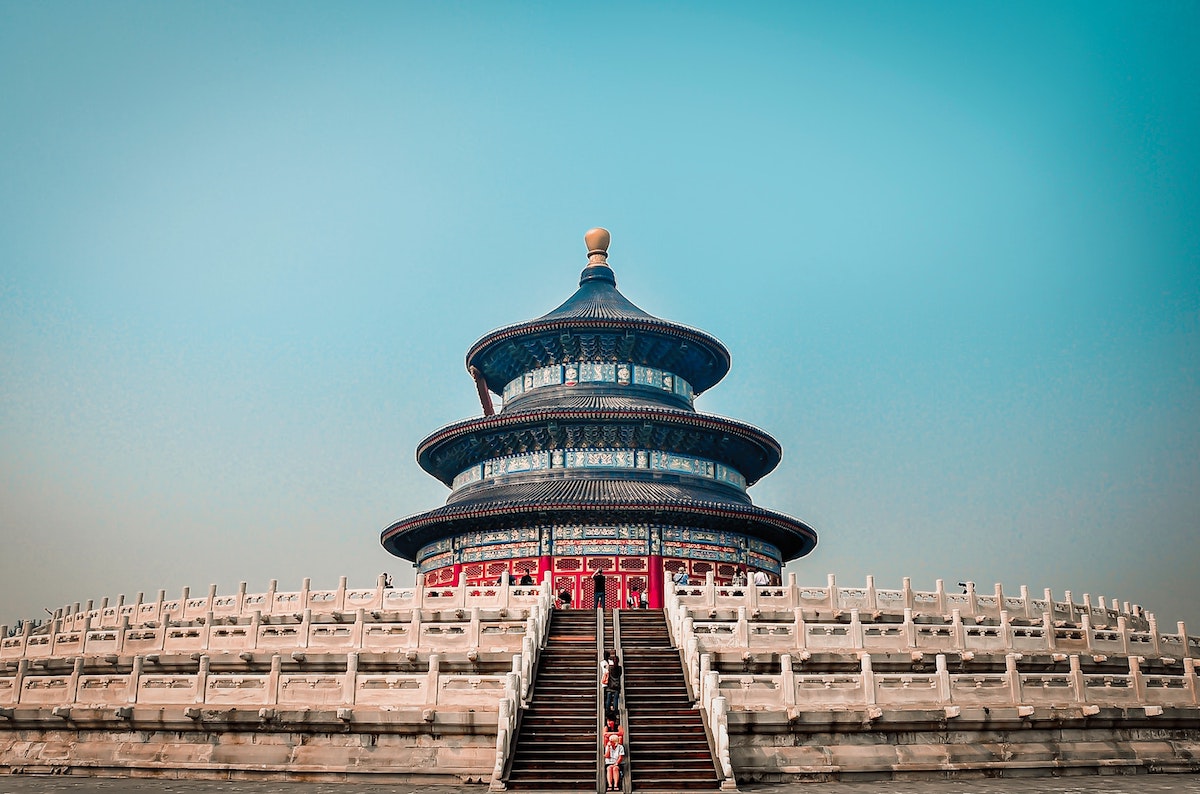 The temple was built in the 15th century for the Emperors of the Ming and Qing dynasties. These courts were built according to the strict philosophical requirements of Fengshui then, used for annual ceremonies of prayer and good harvests from Heaven.

The Temple of Heaven covers about 660 acres of land and is enclosed by a large park. This is about four times the size of the nearby Forbidden City. The surrounding park hosts many exciting activities for the whole family to enjoy. Here, you’ll find the locals singing, dancing, and playing chess in their natural habitat.

You might also find some enthusiasts practising their sweet kung-fu moves and tai chi lessons while enjoying the spirit-filled atmosphere. 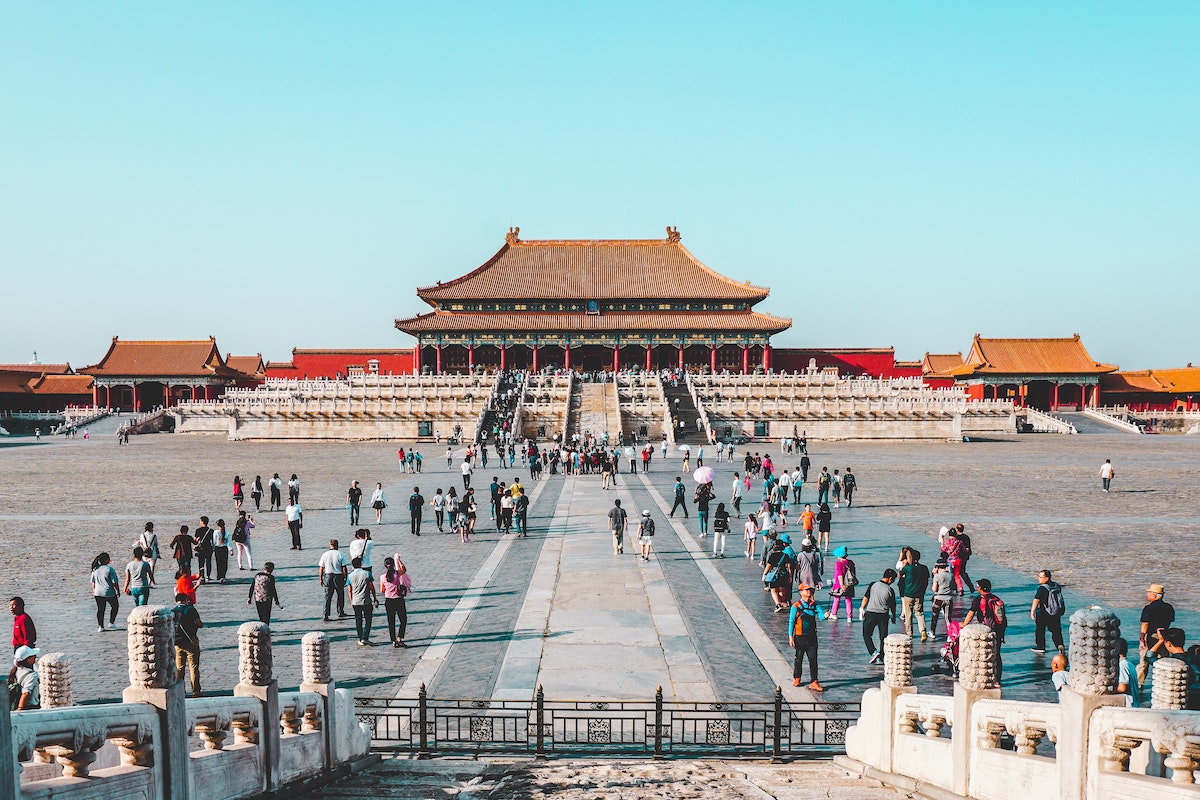 THANK YOU FOR READING THIS LIST OF MY FAMOUS LANDMARKS IN CHINA!